Success, Failure, and Hip-Hop: Reviewing Carousel Players’ This Will Be Excellent 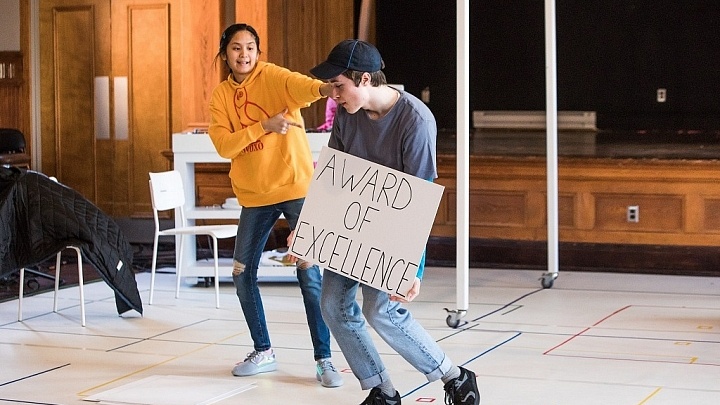 The DARTcritics class of 2017-18 took on the challenge of reviewing theatre for young people, catching Carousel Player’s production of Jordi Mand’s new play The Will Be Excellent at the FirstOntario Performing Arts Centre, where it performed two public matinees before resuming its tour of elementary schools in Southern Ontario. You can read more about the production process for This Will Be Excellent from our embedded critics. Below, two of their peers’ review the public viewing:

Sometimes, we all need a little motivation.

As Daniel and Izzy, the twelve year old protagnonists of This Will Be Excellent, campaign for a popular rapper to perform at their school, the pair make reference to when Kendrick Lamar visited a New Jersey high school in order to discuss the importance of hip-hop music. In NPR’s YouTube video titled “Kendrick Lamar visiting Mr. Mooney’s class,” Kendrick claims that students are “highly intelligent” and that “they inspire me on a whole other level.” Playwright Jordi Mand seems to share this sentiment, and through her work in This Will Be Excellent, Mand celebrates the ingenuity and drive of children through strong characters and an intoxicating sense of fun, without sacrificing intelligent writing in the process. 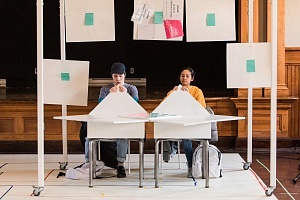 While This Will Be Excellent may market itself towards children, the piece refuses to treat its subjects as juvenile. Daniel and Izzy (Theo Gallaro and Maddie Bautista) are tasked with creating a leadership event, and their journey playfully captures a child’s inner turmoil as independence is thrust upon them. Theo Gallaro and Maddie Bautista endow their characters with a sense of purpose toward their mission, and the actors share an onstage chemistry that effortlessly engages the audience; it was as if I was watching lifelong friends perform rather than actors.

While their chemistry remains strong throughout, some comedic moments in the first act involving a fictional song fall flat, due to what might be seen as a lack of conviction on Bautista’s part. Rather than confidently enjoying the song that Izzy is singing, Bautista performs the fictional tune under her breath, resulting in this particular scene being robbed of its charm.

The supporting cast isn’t too shabby either, with Nicole Joy-Frazer and Diana Reyes providing the adult backbone to Gallaro and Bautista’s childlike wonderment. Reyes in particular is a standout, due to her stern but loving support of our leads as their principal. The principal, brought to life by Reyes’ performance, confidentially inspires other characters to achieve greatness within their work and, in doing so, inspires the audience to do the same. 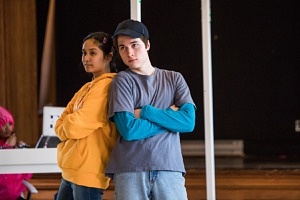 Maddie Bautista and Theo Gallaro in This Will Be Excellent. Photo by Lauren Garbutt.

While Anahita Debonehie’s set design is fun and creative, the hip-hop inspired soundtrack is what expertly realizes the characters surroundings. Famous hip-hop tracks such as Wu Tang Clan’s “C.R.E.A.M.” or Kendrick Lamar’s “Blacker the Berry” provide the show with liveliness and energy that drive the plot forward, while simultaneously representing the style of music dominating the charts of today’s youth. It grounds the show in a reality that young audiences can connect to, effortlessly immersing audiences in the characters’ world.

While Izzy and Daniel do not achieve all of the goals they set out for within the piece, the two characters learn from failure in significant ways, showcasing how failure can inspire children to push forward even in the most hopeless of times. This Will Be Excellent expertly showcases how ingenuity and motivation can change the world, and that we can all achieve excellence if we put our minds to it.

There is a special kind of craftsmanship that is required to create theatre for young audiences. These shows should not only entertain, but also inspire young emerging artists of tomorrow to see the value in live theatre, to carry the torch onward, and to create new work so that the art of drama can live on.

On February 10th, while in the middle of their tour across schools in Southern Ontario, Carousel Players’ production of This Will Be Excellent visited the First Ontario Performing Arts Centre. Dazzling young audiences with its Nickelodeon-style narrative and putting to sleep some older patrons with pop culture references exclusive to 10 to 14 year-olds, playwright Jordi Mand and director Erin Brubacher tap into an energy that keeps kids on their toes. 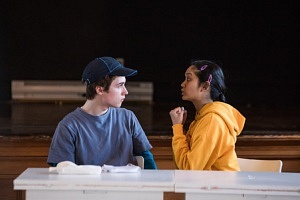 Children in the front row participate with actors Theo Gallaro (Daniel) and Maddie Bautista (Izzy) taking selfies, while the actors take on the room by having audiences cheer for their favorite hip-hop and pop Latin artists, which onstage DJ Fly Lady Di (Dania C. Reyes) plays during the end of the show. All in all, Carousel Players production engages a young audience while also managing to tell a great story.

The premise is simple: Daniel and Izzy are going to award a rapper they idolize with a certificate of excellency, and they are doing whatever it takes to contact and welcome him to their school. Part of what made the story effective was that it does not preach; rather its entertaining structure presents its educational elements so that they are receptive to a younger audience. It’s like wrapping your dog’s medicine in a slice of cheese—the dog gets all the medicinal benefits but in a tasty, wholesome way.

Unfortunately, the play’s message is not overly clear at its conclusion. This Will Be Excellent devotes time to driving a point across about the value of hard work, yet the ending does little to alleviate the disappointment felt when Daniel and Izzy’s hard work going to waste.

This aside, the show is successful on many levels. Anyone who has a child with a passion for theatre or storytelling should be encouraged to see more shows like this, and perhaps even to participate in theatre themselves.