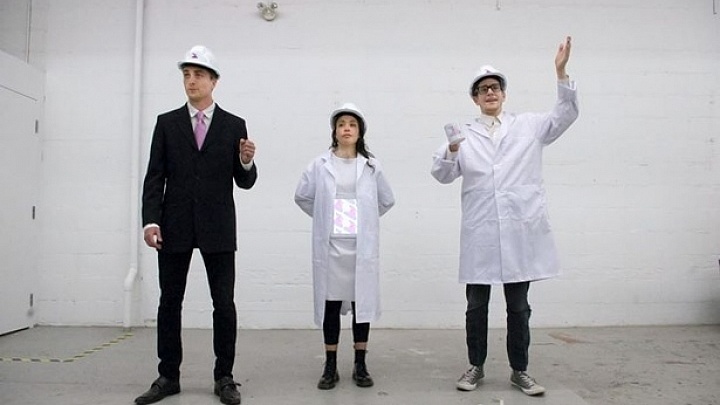 Tough Guy Mountain needs an overhaul in order to become the innovative company it wants to be. Self-titled, Tough Guy Mountain: A Play by Iain Soder is about a strange and eccentric branding company that manages premium quality brands for various companies. The audience follows Lisa’s (Jessica Brown’s) first day as an intern into an odd world of corporate power. Intern Lisa, as well as the audience, are thrown into a world that is strictly by the book… or so it seems.

The corporate ladder goes: Kyle Litecoin (Cale Weir) as CEO and occasional hologram, Queen Empress (Elizabeth Johnston) as head of fake accents, and Ivan Phone (Ian Soder) and Joan Popular (Jonathan Carroll) as the executive clowns of the company. Under that ladder running Intern Purgatory is the intern Phil (WIlliam James Kasurak) and multiple interns named Stan, all played by Sam Roberts. With perky smiles and secret corporate plans, everyone welcomes (and some of them loathe) Lisa’s first day.

This extra-dimensional office space showcases farcical qualities that makes the world of this play compelling at times. The company’s grand choreography that welcomes Lisa, Ivan and Joan’s debate on marrying an office lamp, and Cat Bluemke’s stone cold face while solo-dancing to Rory Maclellan’s deep synth tunes, are all examples of the off-the-wall nature of this production. The insightful text has great moments that really pushes Soder’s message: is art relevant? However, there are negatives that discombobulate the magical moments of this show.

Line deliveries from the cast diminish the quirkiness that lives at the core of this play; most actors stumble over Soder’s sophisticated lines during the high-paced moments of this show. A tiny projector screen with sponsor logos bouncing in the style of a screen saver attempts to create the environment of Tough Guy Mountain’s office space. Instead however of using projections to highlight the play’s action, these projections become repetitive and distracting from the brisk nature of the show.

Uncanny is the proper word to describe Iain Soder’s corporate wonderland; it alienates the audience in order to spark a conversation: do we need to re-brand the term “art” in order for it become more profitable, or do we simply need to change the way we think about art as being profitable? These are some great insights into the arts community, especially with the 2015 federal election coming up, but the production’s action has hiccups that prevents it from being a fully-fleshed out performance.