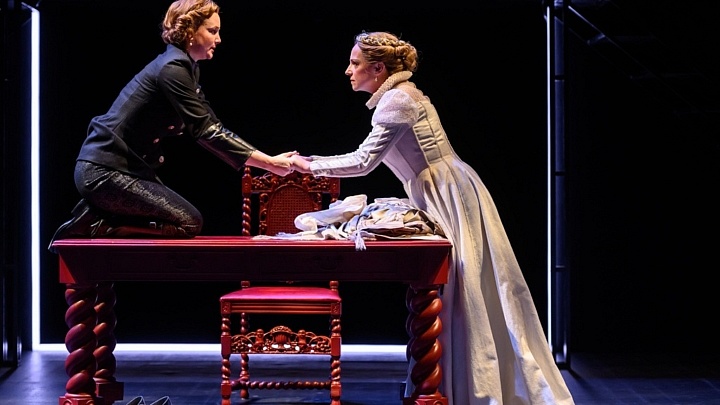 “You must take your rightful place as Queen.”

What a refreshing line to hear after countless stories about men murdering each other for a crown, men waging wars for royal power, and men pulling swords out of stones to become King. Kate Hennig’s Mother’s Daughter is the third play in her Queenmaker Trilogy that puts women at the forefront of plays about the Tudor period, but it is important to note that one need not have seen the previous installments, The Last Wife and The Virgin Trial, in order to enjoy this latest one.

Alan Dilworth’s production of Mother’s Daughter premiered at the Stratford Festival this past May before being remounted at Soulpepper in January. And I can see why – the show is good on every count.

Lorenzo Savoini’s set is striking. It’s much more minimalist than one would expect for a historical drama. The only set pieces are a relatively simple throne-like chair and a table in front of it. Blue light illuminates across in an upper right corner of a wall behind the set. The lighting by Kimberly Purtell as a whole deserves special mention. Besides the subtle attention given to the cross, there are three entranceways outlined with almost fluorescent lights. Every time Catherine of Aragon (called Catarina in this play, potrayed by Fiona Byrne), the mother in the show’s title, walks through an entrance, the lights flicker. Probably because she’s a ghost. Unless she’s just a figment of her daughter Mary’s imagination. 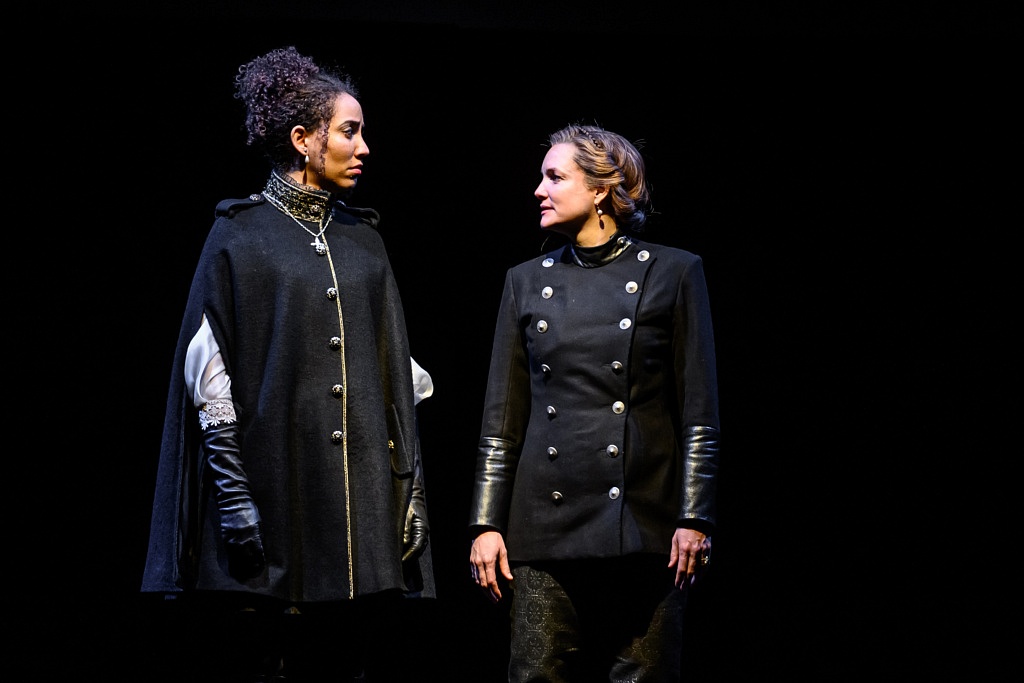 Jessica B. Hill (left) as Bess and Shannon Taylor as Mary in Mother’s Daughter. Pictured above: Taylor as Mary (left) and Fiona Byrne as Catarina. All photos by Dahlia Katz.

The play follows Mary Tudor (Shannon Taylor) – known as “Bloody Mary” – as she struggles to keep her crown while her mother periodically appears to convince her to get rid of her rivals, Elizabeth (Jessica B. Hill) – or Bess, as she’s often called – and Jane Grey (Andrea Rankin).

Overall the performances were strong, but I had some struggles with Rankin’s Jane Grey. Maybe I saw her on an off night, but I could tell she was acting. Her facial expression rarely shifted, often staying in a pleading expression with her brow furrowed; she wasn’t driving through her lines all the time (for example, there were lines where she would start yelling and then trail off, but it did not sound like a conscious character choice), and when she acted with Taylor especially these problems were highlighted against the latter’s seamless acting through her complete commitment to the character.

But this is the only minor flaw in an otherwise solid production. Hennig has written a play that is clearly historical in its characters and plot, but interspersed are much more modern expressions in the dialogue, such as “gee whiz,” and “fiddlesticks,” and talk of King Henry VIII having “sex with a porn star.” The characters wear both modern and period clothes, and sometimes change from one to the other (costumes are also by Savoini). The nods to both time periods are subtle but still clear, such as Catarina’s Elizabethan ruff orBess’s modern black hoodie with fishnet sleeves. I would have to watch the show again to note the importance of when characters change from period to modern (or the reverse), but one moment that sticks out is when Mary changes from her period skirt and blouse to a military style jacket and pants, while Bess stands above her, also wearing pants. This occurs right before Mary’s successful revolution, and the choice to have Tudor women dress in a traditionally masculine way reads to me like the designers were trying to point to the fact that both Mary and Bess were ahead of their time as women. 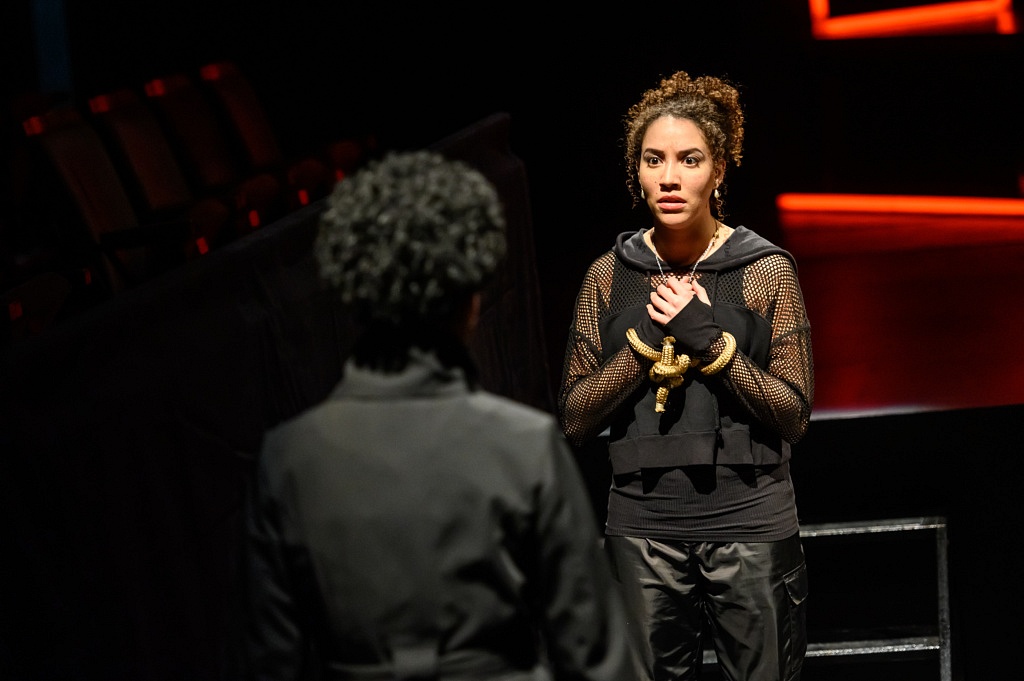 This integration of the modern and contemporary via both the costumes and language reminds us how relevant the play is today. Under the right circumstances, these events could absolutely unfold now – women are gaining more power, religion is always an influence on political situations and decisions, and there’s nothing to say history cannot repeat itself. I also found the modern elements made the characters feel more real. It’s easy to see them as mythical historical figures that we only read about in books, but hearing them use the words we would use or see them in outfits I have seen in store windows brings them back to reality and reminds us that they were real people, just like us (minus the royal crowns).

The play does important feminist work. There is only one male character in the play (portrayed by Gordon Patrick White), though there are other males referenced. This is not at all to say that feminist stories should not include men, but seeing so many women onstage depicting a time period and “rightful heir” trope that is often dominated by stories about men is refreshing. It’s also refreshing that they are not perfect, fighting for what is right, or particularly nice people all the time – they’re not written to be the women we should aspire to be. It’s new for me to see women onstage being depicted aspowerful and strong not because they’re women, but because they’re human. That being said, there are clear feminist moments in the play. The double standard for men vs. women when it comes to marriage is touched on when Mary calls out the council for trying to pick a husband for her: “do you think Henry would allow his council to choose his wives?”, and I got chills when Mary is told that she undersells herself and responds with “I am not meant to be sold.”

But beyond these overtly feminist moments, the fact that these characters are women doesn’t define them. They are fully fleshed out characters that create an interesting story regardless of their sex. This is a different type of feminism than I usually see in the theatre since it’s not painting all women as good people or celebrating womanhood in an effort to prove that we can do what men do, but rather proving that strong women have always existed and that they can be cutthroat and driven not because they’re women, but because they can. Mary is not really a villain, but she’s not a hero either – and I think somehow that’s exactly what makes this play feminist. She was a strong, powerful woman who did some bad things to innocent people and her sex has nothing to do with it. The women in this play are portrayed as flawed, complicated, fascinating human beings.

This show is overall expertly done. Even if you know how the history unfolds, it’s still dramatic; it manages to be a historical piece that still feels very modern and relevant; and it’s unique in concept and execution. It’s the type of showthat you can’t immediately talk about right away because there’s so much to process. And through the process of unpacking of it all, I realized what a rich production this really is.