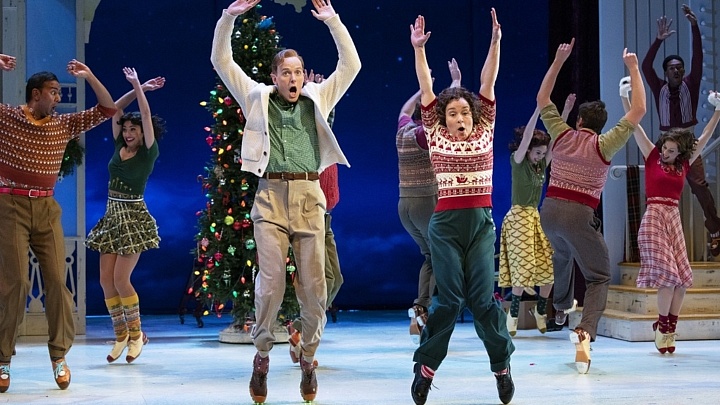 Sometimes, what you really need is to see grown adults dressed as turkeys dancing with pilgrims. It’s good for the soul. As is the rest of Holiday Inn – a feel-good Christmas-y musical now playing at the Shaw Festival for the holiday season.

Based on the 1942 movie starring Fred Astaire and Bing Crosby, Holiday Inn is about a man named Jim (Kyle Blair) who leaves a career in show business to try and operate a farm in Connecticut, in pursuit of a simpler life. As he struggles to find the money to keep the farm going, he comes up with the idea to turn the farm into an inn that will put on shows featuring his old actor friends, open only on holidays. Along the way he meets one of the farm’s original occupants, Linda Mason (Kristi Frank), a schoolteacher who used to dream of becoming a performer. As he helps her return to the world of performing, the two develop a romance that is threatened when Hollywood producers try to pull her away to create a movie about the inn. 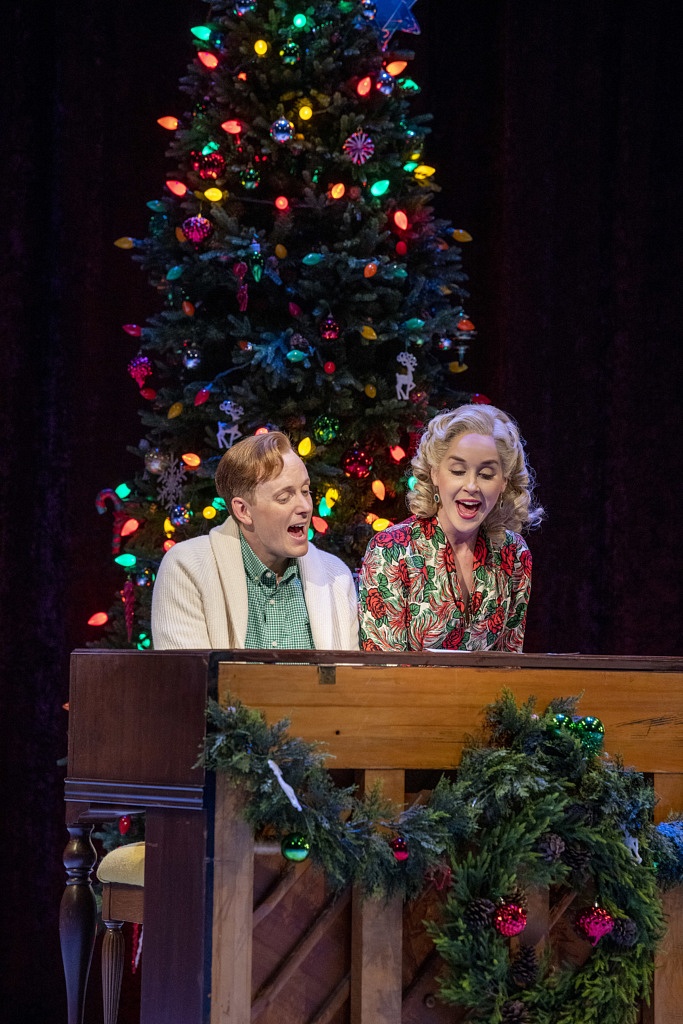 This show made me remember why I love musicals. Does it make sense that random dance and song breaks happen for absolutely no reason? Should I question why Jim can afford to put on these lavish shows without another source of income? If there’s only 15 bedrooms, how do the guests of the inn and cast all have enough room to sleep? It doesn’t matter! It’s a musical! Things don’t have to make perfect sense to be enjoyable. We can’t expect to take everything too seriously, and I love it.

Even though the stage musical itself is only a few years old – it premiered on Broadway only three years ago – it still has an old timey feel. The musical book (by Gordon Greenberg and Chad Hodge) is not the same as the filmscript, but like the film, all of the songs are by Irving Berlin, and the show takes place during the late 1940s. This makes it reminiscent of the great old musicals from the golden age, like The Sound of Music or My Fair Lady. The songs aren’t belted out, but rather crooned, and the dancing is sweet and romantic.

The performances are fantastic, which I have come to expect from Shaw productions. Blair as Jim is a charming leading man, with a voice like silk. I would pay for his Christmas album should he ever make one. Kimberley Rampersad commands the stage and certainly knows how to flaunt it as Lila Dixon, Jim’s sexy ex-fiancée and ex-dance partner who tours across the country. The most standout performance is Jenny L. Wright as the farm’s handyman, Louise (pictured in the top photo with Blair and the company; photo by Emily Cooper). She’s a scene-stealer with her perfect comedic timing and complete embrace of the character’s loudness, boldness, and heart.

The costumes (design by Judith Bowden) are to die for. Every single outfit Lila wears is a showstopper: sparkly and sexy and fierce, everything a star could dream of. Linda’s costumes fit her character perfectly. They are glamorous, but classy, and something you would imagine the leading lady in a Hallmark Christmas film would wear. Each ensemble member goes through maybe a dozen costumes, and all bring with them a warm holiday feel – they’re colourful, fun, bright, and exude the 40s.

The show does exactly what it wants to do, and that is to give the audiences a bit of joy during this holiday season, especially given the difficult times we seem to always be in. Despite the huge sets (also by Bowden, such as a giant clock as the backdrop for a New Year’s Eve number), big dance breaks, and fancy costumes, Holiday Inn encourages us to appreciate the simpler things in life, like going for walks or spending time with loved ones. Director Kate Hennig writes in the program, “Holiday Inn has no neurotic reaction, no nastiness, no anger… We bring you this play filled with LOVE.”

I think that oftentimes, especially within the theatre community, theatre for the sake of entertainment and escapism is undervalued. There’s a real push for theatre that has a “message,” theatre that will incite change, start a revolution, and make us ponder the big questions about life and why we’re here. That type of theatre is definitely important – but so is theatre that just makes us smile and feel all warm and fuzzy inside. There’s a lot that’s wrong with the world, and life often throws us curve balls and stress and anxiety. Having a two-and-a-half-hour break from that stress to just sit with a loved one and be dazzled by perfectly in-sync tap dancing, or get hit with a wave of nostalgia and Christmas-feels when Jim and Linda sing “White Christmas” together… like I said, it’s soul food. We can’t underestimate the power of something that makes us happy during dark times, and Holiday Inn absolutely fits that bill.