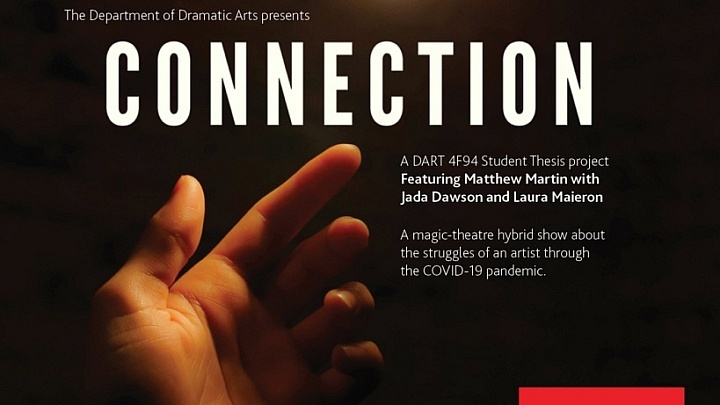 “The magic of theatre” – a common descriptor of productions and a personal favourite explanation as to why I love the arts. Theatre has an ability to compel with such a force that the result is sometimes unexplainable. Whether it be the lights, the performers, or the set, when a world onstage is created that presents marvel after marvel, I cannot help but give into the imagined world before me.

But what happens when practical magic enters the theatrical realm – when there is an intersection of illusion, performance, and live production? Fourth year Dramatic Arts student Matthew Martin approaches this topic through his DART 4F94 Honours Thesis Project, Connection.

“The DART 4F94 Honours Thesis Project course is a great opportunity for highly motivated and focused students to work closely with a faculty member on a project,” said Karen Fricker, DART’s Undergraduate Program Officer and Martin’s 4F94 supervisor. “It’s been exciting and enlightening to work with Matthew on his project, which really brings DART’s praxis philosophy to life.”

Matthew Martin in rehearsal for Connection. The image is a still from Brock TV footage.

Martin began with a research paper in which he proposed three principles as to how magic and theatre can intersect. “The first one was influencing audience memory,” he explained. “Magic has a really interesting knack for playing with how an audience remembers a show and I wanted to see how theatre can do the same.”

The second was blurring when a show begins and ends. Martin offered an example: “If I were to do a card trick… For you, the trick started when I said, ‘pick a card, any card,’ but I could have had an hour or two hours earlier someone pocket that card… So, for me, the trick started two hours ago.”

Finally, the third principle was misdirection: “It’s a very common technique in magic, being able to control audience attention, which I believe theatre is doing in certain ways and I wanted to see how it can be further applied,” he said.

Following the paper, Martin dove into the development of his production. Wanting to bring together the past year and a half of isolation with his three principles as the show’s narrative, Martin spoke to friends and fellow artists: “I asked them about what they were going through with COVID-19,” he said. “I wanted to tell a story from that, that was both personal but also universal.”

Storytelling may imply a considerable amount of language, especially given that magic shows very frequently involve monologues. However, Martin wanted to explore the possibility of disrupting the conventions of his craft: “I wanted to tell a story differently and not rely on a monologue-type delivery… how do I tell my story with my body? How do I tell it with my facial expressions, my reactions, my everything?”

Lia Strazzeri in rehearsal for Connection. The image is a still from Brock TV footage.

Martin brought in fellow DART student Lia Strazzeri to help answer these questions through her work as assistant director and stage manager. Strazzeri has not only has been working on the logistics of the show but also serving as a creative associate. The two worked in tight-knit collaboration on the script and continue to do so as they prep for opening night on December 17.

A main piece of preparation has been the technological aspects. While still keeping a few tricks up their sleeves, Martin and Strazzeri discussed the difficulty of accessing some technical elements that will amplify the show. One thing they made sure to point out was the weight their finale holds, and the hard work they’ve done to achieve a desired effect.

“Our final scene,” Strazzeri began, “we were like, this is the image we want to present. What are ways we can we do this?” Strazzeri and Martin bounced idea after idea off the other. “There was a whole list of things – that doesn’t work, we can’t do that, this won’t happen, out of our budget. We were exhausting a lot of options.”

Thus, the revelation of how to end the show came with celebration. “If you looked into my computer, you would see like seven different endings that I had,” said Martin. “So, when I finally came to the realization of what I ended up choosing… there was a beautiful, Eureka!, lightbulb moment.”

Matthew Martin in rehearsal for Connection. The image is a still from Brock TV footage.

This isn’t the first time Martin’s magic has been featured at the Marilyn I. Walker Theatre. Just under two years ago and a few months prior to the first pandemic lockdown, Martin created an independent DART production called Illusions, which “was about the illusions that we experience in everyday life, and how it’s okay to be fooled by them, but we need to be aware of them as well,” Martin explained.

Independent projects are opportunities for student-led projects with the support of the Dramatic Arts department in terms of rehearsal and performance space, technical and production resources, and/or small budgets. Martin made the most of this opportunity: Illusions was a precursor to some of his work on Connection, though in a number of ways the shows are quite different. Connection is less reliant on narration and has a different storyline, and is 30-40 minutes long, while the earlier show was double that. “Whilst short, packs a punch,” Strazzeri said of Connection.

Martin noted there is an emotional rawness to the show, one that “really breaks us down to the bone marrow of who we are.” He put a great deal of emphasis on this point as he opened up about his hopes for the production: “COVID-19 has been incredibly isolating for all of us… but the thing I wanted to communicate with the show is find what makes you feel connected to yourself and connected to other people. For me, that was magic.”

Martin and Strazzeri described to me an emotionally turbulent piece filled with passion and fuelled by emerging the pandemic’s seclusion. Asked to describe the show in three words, Martin said Connection is “intimate, magical, and hopeful.”

Connection runs from December 17-19 in the Marilyn I. Walker Theatre. Tickets are available here: https://brocku.universitytickets.com.