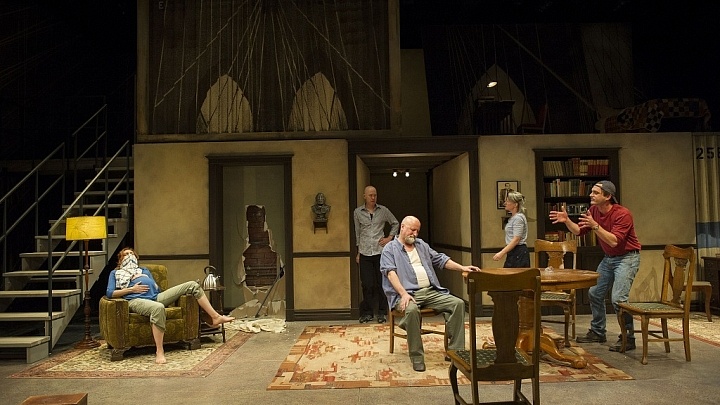 What happens when the uncertain future does not comply with our ideal way of living? Eda Holmes, director of The Intelligent Homosexual’s Guide to Capitalism and Socialism With A Key To The Scriptures at the Shaw Festival this season, tackles this and other questions in Tony Kushner’s four-hour epic. IHO is a riveting production that stimulates the thinkers and infuriates the believers as we follow 72 year-old Marxist Gus Marcantonio (Jim Mezon) on his personal search for the “ideal” American dream in the final chapters of his life.

A member of the American Communist Party since 1952, Gus has become increasingly aware that in the present day (rather, 2007) his ideals do not match up with the current political state and decides to take matters into his own hands. The show opens with Gus’ eldest son Pill (Steven Sutcliffe) rushing off the phone with his paramour Eli (Ben Sanders) to attend an emergency family meeting concerning his father’s adamant desire to commit suicide. Gus wants to liquify the family-owned brownstone Brooklyn estate and kill himself before the housing-market crashes, in order to get the most payout for his three children Pill, M.T. (Kelli Fox), and Vito (Gray Powell).

Now don’t let the lengthy title, the running time of almost four hours, or the political nature of this show deter from seeing IHO; Kushner’s play is mainly about love, and the delicate and difficult relationships that exist in a close-knit family. This show has so many unexpected surprises: Powell’s rash demolition of his home keeps the audience on the edge of their seats, and, even being a gay man myself, I was shocked by the steamy intimacy between Sutcliffe and Sanders (well done, Shaw!). Peter Hartwell’s design of the Marcantonio household is somehow able to contain and weather the ungodly fast-paced arguments that the family is constantly having (coming from an Italian background myself, I can relate). Keeping up on everyone’s individual perspectives on Gus’ suicidal plans is exhausting, but rewarding. Holmes directs a powerful game of carrot-and-stick, letting the audience get caught up with the family’s arguments but never making these extremely delicate and emotional scenes between family members easy to follow.

You don’t have to understand IHO to enjoy it, which is good because you mostly likely won’t understand all of it. Let the show wash over you; it’s okay to sometimes be bombarded with opinions. I confidently call my self an unintelligent homosexual. I can’t say I have any firm political standpoints, but I’d like to see myself as a thinker. I was thinking a lot as I left the theatre, and I think a lot of IHO itself.