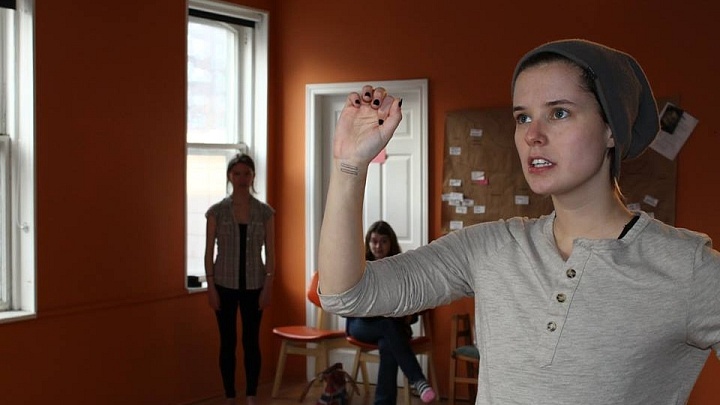 Well that’s all folks! In The Soil is wrapped up and the shows are over.

Or are they? Yesterday Hayley and I sat down with some artists from In The Soil to discuss the future life of projects that premiered in this year’s local arts festival. Among them, still sporting the beanie of her favourite hero, is Dragonfire Players’ actor and partial creator of The After Year: Tanisha Minson.

For those of you who unfortunately missed the production, The After Year chronicles the life of seven survivors who bravely escape the near annihilation of the human race (you can read my preview piece here). In this crazy world of super viruses and genetically modified human beings, it is up to unstable genius Jackson (played by Minson) to protect his new family from the horrors they encounter in a post-apocalyptic world.

Dragonfire Players chose to self-direct this production, so yesterday Hayley and I invited Minson for a cup of coffee at Mahtay to reflect on obstacles that the company’ unique approach presented. The After Year has secured a spot in this year’s London Fringe Festival this June, and need to have a neat, clean 55 minute show. So, with only a month to remount the production, the company is negotiating feedback they have received from In The Soil audiences to improve their story; Hayley and I were happy to lend our opinions and assist in the piece’s evolution whilst preparing to travel to a new city.

As of today Dragonfire Players have already begun rehearsals and, on top of training another actor, they are performing serious edits on their script. “We’re hoping that by trimming down some of the exposition we can really start focusing more on plot,” Minson explained; the company felt that excessive description, particularly the show’s opening voice overs, muddled the timeline of their actual story. Minson articulated that, “There are things we got attached to early on in the process, things that we cut but still held onto little bits of that still made it into our final script,” and she repeated throughout our discussion that there is difficultly in navigating the complex world they created. Knowing how much information to give an audience is tough, and Minson acknowledged readily that, although backstory and exposition can inform an actor’s character, “It takes away from time that can be spent on developing other characters and their motivations.”

Another piece of audience feedback the company has taken advantage of is the recommendation to center the story on one protagonist. As writer Anna Macalpine articulates in our previous interview, the play’s world provides enough potential to write a separate play for each of the seven characters. Minson agreed and speculated that without a central hero audiences were unsure of how to feel about each character. Minson announced that the team wants the audience to follow Jackson’s ‘moral compass’ and how it conflicts with the reality of his world.

Minson also questioned whether Jackson’s position as transgendered was properly articulated to the audience; she concluded that “[the audience] felt we brushed over the fact that Jackson was trans and this is something people don’t see onstage very often, so they wanted some more time with it.” Hayley and I agreed that this was definitely an interesting part of the character we missed out on, and Minson added that with their new edits they “want to allow [Anna’s] writing some time to say something good about the representation of trans individuals onstage and in the Sci-Fi genre.” It’s an interesting position that should give the company plenty of fuel for rewrites over the next few weeks.

Rewriting the script on top of training their new actor – Geoffrey Heaney, who was a blast as the Narrator in a-PIE-calypse NOW!! – to replace Dylan Mawson in the role of Nathaniel West will be a challenging task in the weeks to come. However, armed with the knowledge of fellow In The Soil artists and the feedback they received from their audiences, I have no doubt that Dragonfire Players will rise to this occasion. It is my hope that what started out as a seed here at In The Soil will sprout and grow into a unique and clever take on the post-apocalyptic story. Minson concluded our interview by saying “You have to accept your mistakes and relish in improvement.” It’s a great attitude to have, and I hope it brings them much success in their future endeavors. After all, art is never a finished product, only a process to which we can improve on.