Behind the scenes at Shaw 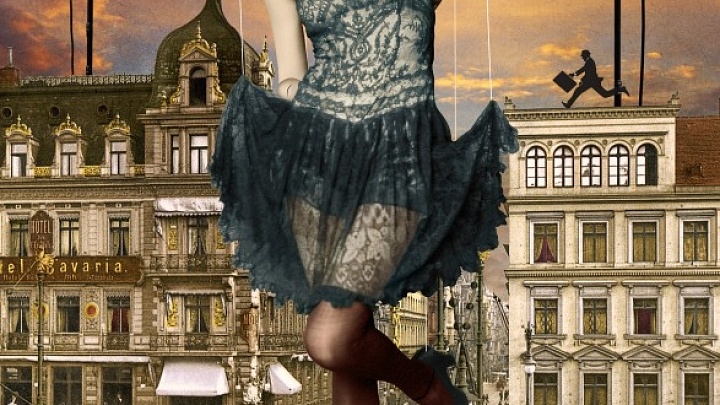 Early Saturday morning on March 8, a group of five of us #DARTCritics headed to the Shaw Festival Theatre, to sit in on a rehearsal of director Peter Hinton’s production of Cabaret. With little idea of what to expect, and the buzz of coffee-charged chatter filling the small car, we made our way to the beautiful Niagara-on the-Lake.

As soon as we arrived, our jaws were dropping – we couldn’t believe what we were being shown. We were given a sneak peak into every aspect of the play’s production, including a backstage look at the show’s elaborate set piece, which will act as a multi-story playing surface for the actors. How amazing was it? You’ll just have to come to the show to experience it for yourself, but in that moment, the scale and sophistication of this production was absolutely clear to us.

We immediately saw just how intricately every aspect of this production has been planned, and the extent to which Peter Hinton goes to create his productions – not just within the directorial process with the actors, but within the concepts he explores and extracts from the play’s text to create this multidimensional performance.

As we were guided into the rehearsal hall, we were informed that we were about to enter the Shaw Festival’s largest rehearsal space – and large it was: the set was taped off in the very centre of the room, and was surrounded by high ceilings, huge windows, and theatre lights. The walls, we were thrilled to discover, were covered from the ground up with hundreds of photos, illustrating in a room-sized collage the exact artistic direction that Hinton has been taking with Cabaret. He had made the entire space into a giant inspiration board, allowing the actors – and us critics – to have a visual reference for how his directorial, thematic and design choices have influenced the style of the production. The photos were mostly ’20s-era images, showcasing everything from raw sexuality to theatrical spectacle. As theatre students used to rehearsing in whatever space we can get our hands on, the room wasn’t just impressive – it was extremely inspiring.

The atmosphere itself was very focused, and our giddy excitement dropped to a level of quiet appreciation as things began. The few people in the room were all busy doing their jobs; from the assistant director to the stage manager – everyone had a purpose and was absorbed in their own processes. It was a mixture of professionalism and a vast amount of respect for each person’s work. It was still early as we were shown around the space, but the energy was high, and we were fascinated to see the different people that are involved in even a small rehearsal such as this one.

We could have spent the entire rehearsal exploring the room itself, but the rehearsal began, Deborah Hay and Gray Powell took to the floor, and we took our seats.

Questions started to fly between Hinton and his actors before the scene even began, in which Sally Bowles gives Cliff Bradshaw, her current lover, some news that involves both of them, and which then leads into her singing “Maybe This Time”. It was a scene they had already worked on, but Hinton was hoping to rework it. He pushed Hay and Powell to look at the scene differently, using full and rounded examples to further their understanding. The conversation was a back and forth discussion between actors and director, and gave us all the sense of collaboration and cooperation.

Then the scene began. Hay and Powell showed their incredible talent and range; in take after take they tried new things and explored their characters’ motivations. They seemed completely free to experiment and deviate from anything that had happened before.

The relationship between Hinton and his actors is one we wish anybody could witness. The curiousness and playfulness on both sides is encouraging for young actors and his nurturing tone was pleasant to hear.

When Hay began to rehearse “Maybe This Time”, a song about a woman unlucky in love at the start of something that might finally go her way, the level of engagement shifted. Shockingly, it became even more close and personal. With Hay standing only a few feet in front of him, Hinton had the perfect opportunity to motivate and push her into certain directions of emotion and passion. As her voice filled the space, you could hear Hinton giving Sally Bowles the chance to find what she has been waiting for: “See the possibilities, right there in front of you.”

The rehearsal was very intimate: just Hinton, Hay and Powell working together on the scene. The room that had seemed so large when we first walked in now was small and personal. We were flies on the wall – spectators to the moment shared between the three of them. We weren’t a part of it, but we were honoured to be there to experience it. – Angie Colosimo, Misha Harding, Jesse Heichert, Amanda McDonnell, Alanna Stewart

On February 13, 2014, students in Brock University’s Department of Dramatic Arts had the pleasure of listening to director Peter Hinton talk about his shows, past and present, and have their burning questions answered in person.

During his two-hour visit, Hinton discussed his recent projects, which include a production of Wilde’s Lady Windermere’s Fan at the Shaw Festival in 2013, and a new version of Chekhov’s The Seagull at Montréal’s Segal Centre in February 2014. Perhaps most exciting, we were able to hear some of his thoughts about his upcoming production of the 1966 musical Cabaret at Shaw.
Based on Christopher Isherwood’s 1939 book Goodbye to Berlin, Cabaret is set in Weimar Germany in 1931, as the Nazis are rising to power. It focuses on the nightlife at the Kit Kat Klub whose star performer, 19-year old Englishwoman Sally Bowles, enters a relationship with young American writer Cliff Bradshaw, as the Emcee oversees all the action.
Many will know the classic 1972 film version starring Liza Minnelli and Joel Grey, but Hinton is planning on tackling the difficult subject matter with a fresh eye. He intends to avoid the good versus evil trope that tends to arise in works treating the Holocaust. “What drew me to it was the challenge to present a swastika on stage with characters who have not seen it before, or see it with freshness – not with 60, 70 years of history that we see it with. Characters who don’t know what will happen at Auschwitz.”
Hinton does not want a story that romanticizes history, with audiences cheering for the good guys, and booing at the bad as soon as they approach the stage – he wants to present a show that communicates the seriousness and complicated nature of what took place in Nazi Germany. “’The Nazis are my neighbours and friends,’ Fraulein Schneider says. I like that. I’m interested in that story more than I am the ‘lest we forget’, victimized story.”
Hinton continues: “Cabaret is not about those crazy wild artists who get victimized by the mad Nazis. [Cabaret] is about the Nazi within each one of us.”
Hinton made reference to the Sochi 2014 Winter Olympics to illustrate these conflicted feelings, as students watched the Games in Brock’s own Guernsey Market only yards from the theatre where we were speaking with him. “Is anyone afraid to see the Olympics on the TV, and what is supporting that? Is anyone conflicted about that? Are we supporting Putin, or our team? Our players? You know, that same argument took place in 1936.
“I don’t judge anyone who is sitting in there and watching the Games. But I can’t join them. I can’t be enthusiastic, because it is terrifying to me too. I feel fear, and I don’t want it to be real. I want, ‘Oh, it’s just exaggerated, Putin. Oh, that’s extreme to compare it to the Nazis. That’s extreme.’ I don’t know if it is. So, that is what I am trying to do in Cabaret – evoke that feeling.”
Hinton wants the to prompt such a moral debate in his audience. He doesn’t want to provide easy answers, and have the audience know exactly what to think. “It’s confusing. That is what’s interesting about it. It’s about a moral confusion.”
As might have been expected, Hinton was fantastic to listen to – especially for a group of budding theatre-makers. Moving on from discussing his own shows, he provided some inspiring words for everyone to take with them: “I always thought that theatre was an elite club to get into, but theatre already belongs to you.”

Cabaret plays this year in the Festival Theatre at the Shaw Festival from 10 April to 26 October.