Our Shaw embedders stepped into The Horse and His Boy‘s rehearsal hall for the first time.

The Shaw Festival is one of Canada’s most prestigious theatre companies. The four of us have all seen shows at Shaw before, and now we have the privilege of stepping behind the curtain to see how its productions come to life as we follow the creation of The Horse and His Boy from behind the scenes. The team is halfway through the overall rehearsal process, but today is the first time we are observing a rehearsal. As we sign in and make our way to Rehearsal Hall 3, we cannot help but be excited and nervous for what we will discover behind the door. The hall is bigger than we expected, full of natural light thanks to giant windows. We see that there is a table of props lining the back of the room (but we have no real knowledge as to how they will work just yet) as well as colourful, mystical trees; purple mountains; and a life-sized cat puppet. We see a circle of chairs with music stands in front of them, which we theatre people recognize as a sign that a vocal rehearsal is about to go down. We are given chairs at the back of the room from which we can observe the rehearsal. The cast trickles in as the four of us silently freak out from being in the presence of these talented industry professionals we have admired from previous shows. When Brubaker introduces us as embedded critics, one of the actors, George Krissa (who plays Rabadash), asks,“are you here to criticize us?” which prompts an explanation that we are just there to observe, enjoy, and report rehearsal happenings. Once we get over the initial excitement of seeing people we’re in awe of, we are ready to focus.

Cover for The Horse and His Boy by C.S. Lewis, published by HarperCollins.

After a break, the rehearsal resumes as Ryan deSouza, the Shaw’s associate music director, introduces the music the cast will be working on. The pieces are new iterations of songs they have worked on before, this time with added harmonies to make them more complex. Deanna H. Choi wrote the music and Anna Chatterton, who is adapting C. S. Lewis’s text for this production, is also the lyricist. Brubaker explains it was a bit of a “chicken and egg” situation when it came to melodies and words: Chatterton’s initial script included some lyrics, and once Choi started to compose, she and Chatterton played off each other in a mutual cycle of inspiration. There are many pieces that sound more like chants, full of onomatopoeic words to create a specific atmosphere (for example, “clippity cloppity” repeated while horses are running). One of our favourites is “snap, snap, follow the map” which we feel is a good reflection of what Brubaker wants people to get from the show – to listen to the voices in our hearts and take risks. The chorus sings this at the beginning of the show, setting up the theme of taking the journey to find where you belong, which is represented by a map that serves as a symbol of the quest.

Once they have established groups for harmonies and practice the first song many times, they get on their feet and go to the trees that they move on stage during a scene change. They must practice this to make sure their voices will still be heard from behind the trees as they will not be wearing microphones.

After an hour and forty-five minutes of vocal rehearsal, there’s a break, during which Brubaker gives us a little tour of the rehearsal hall and answers our questions. She shows us the drawings of the sets (designed by Jennifer Goodman) and mentions that every location has its own colour scheme: Tashbaan is gold, the mountains are purple, Calormen is Blue/Teal, the forest is a green-blue, and Archenland is pink. We are very curious about how they will represent the horses who drive the story forward: Hwin (Kristi Frank) and Bree (Jay Turvey) are close friends of the two lead human characters Aravis (Madelyn Kriese) and Shasta (Matt Nethersole), transporting them throughout their adventure. She shows us a saddle and explains the design concept: there will be one person playing the head and one person playing the tail of each horse with a saddle in between them on rollers, so that an actor can ride on the back of the horse. The heads of the actors will be seen under the horse heads. The costume sketches are up on the wall right beside where we sit at the back corner of the rehearsal hall. It is a gratifying experience to be able to see the sketches and then look at the actors to better visualize their characters. At times, actors including David Ball (Tumnus) and Julie Lumsden (Ensemble) come and look at the sketches before a scene to help them get into character. 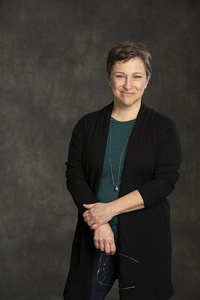 When everyone comes back from break, they dive into scene work. Many of the notes Brubaker gives the actors (for example, “don’t anticipate”) are the same kind of notes we are often given here at Brock, reaffirming our faith in the professional level of instruction at our school. Brubaker’s style of directing is lovely to watch – she is very open to offers from the actors, laughs even when watching the same scene for the sixth time in a row, and asks good questions to help the actors get at the heart of their characters. We see some script changes happen, when lines don’t work with the characters, or don’t feel right. The actor will ask if they can reword lines so that they flow more naturally for them. The company has a copy of Lewis’s The Horse and his Boy on a computer to refer to when actors have questions about material taken directly from the book: for example, Drew Plummer asks if his character, Edmund, believes the desert is impassible, or if Edmund is asking Tumnus if the desert is impassible.

The rehearsal hall feels energized and like a safe space. None of us are made to feel like outsiders, but rather that are welcomed to witness (not judge) the work unfolding before us. As we watch Act 1 getting locked in, we can’t help but look forward to our next visit, in which we’ll see the company work on Act 2.