Getting Comfortable With The Uncomfortable: Tackling Taboo Head-On in This is the Point 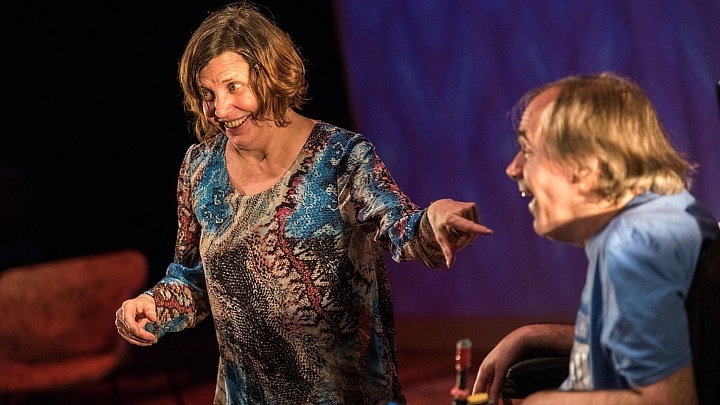 “Are you scared to have another baby?”

This is a question Christina Serra gets asked solely because her son, Bruno, has cerebral palsy. She used to perform in Ahuri Theatre’s This is the Point, but then made the decision not to anymore. Her husband Dan Watson explains during the show that she felt like she was standing in front of an audience having to justify why she loved her son despite his cerebral palsy, which she felt she shouldn’t have to say. 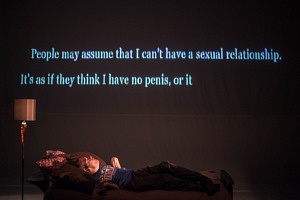 As he explains, Watson has continued to perform in this play because he thinks it is full of things we need to keep saying.

He, along with Serra, Tony Diamanti, Karin Randoja, and Liz MacDougall, wrote This is the Point, a show about de-stigmatizing those living with cerebral palsy, especially in regards to how society views these individuals’ romantic and familial relationships. Diamanti and MacDougall, both of whom have cerebral palsy, advocate for normalizing sexual relationships in particular).

Diamanti uses Augmentative and Alternative Communication to speak to the audience, which is essentially a letterboard he taps to convey what he wants to say. At times, the letterboard is supposed to be projected onto the screen so that the audience can see for themselves how it works, but there was a loose wire the night I went. The creators dealt with this problem beautifully – they invited audience members up to stand with Diamanti and read aloud what he was communicating, allowing for a special, intimate connection between audience and performance. This accident flowed very well with the casual, intimate feel of the production. The audience is regularly addressed, and Watson even mentions at the beginning that some things might run slower than people are used to – the letterboard Diamanti uses takes some time – but that that is ok. 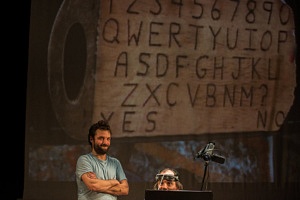 The stumbles and technical difficulties do not take away from the production in the least. I felt privileged to listen to the performers’ stories (the focus is more on personal story-telling than traditional plot) and watch them be so honest and vulnerable. I will say that I found myself feeling uncomfortable at times because the anecdotes are so personal and perhaps share a little too much information (the “Spanking Fairy” comes to mind), but this discomfort lines up with what the creators are trying to do with these stories: talk about intimate sexual relationships, which is not always a comfortable subject.

To put it simply, this is an important play. Disability or not, we are all just people, as This is the Point demonstrates. MacDougall sums it up the best during a passionate speech: “everyone deserves to be treated with compassion, dignity, and respect.”

Funny, sexy and disturbing, just like real life. This is the Point is a collaborative play about disability. This unapologetically raw production depicts how cerebral palsy shapes the lives of two couples. 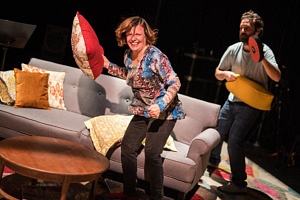 The performers walk into the theatre and explain to the audience that they will be depicting their real-life dilemmas and real conversations through theatrical re-enactments. Dan Watson, a father of three, has a son named Bruno with cerebral palsy. Watson and his wife Cristina Serra (who used to perform in the show), work to give Bruno everything he needs to succeed in life. Tony Diamanti is non-verbal and uses a letter board to communicate. Liz Macdougall, Diamanti’s long-term partner, is constantly confronted with judgement about their love and sexuality.

Audio description was available at the performance I attended, and the audience was introduced to two ASL translators.

Throughout the play, a video camera is used to project in real-time onto a screen that also acts as the upstage wall. The video camera is attached to Diamanti’s electric wheelchair, and his letter board is projected onto the screen. Watson often translates for Diamanti but there are moments when the audience is asked to participate and read aloud what Diamanti spells out. 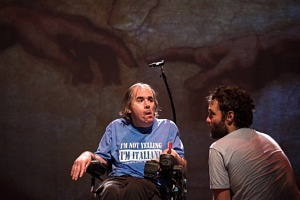 The play jumps around as each performer shares pieces of their story. A scene I found problematic was when Diamanti shares the first time he had sex. Watson comedically appears in a blonde wig and a dress giving Diamanti acid. He then proceeds to depict Diamanti being assaulted. The audience was clearly enjoying this moment until they realized what they were seeing. Watson asks, “So that was your first time having sex?” Diamanti replies, “It was more like rape.” I seemed to be one of the few audience members not laughing during this scene, as I had a pretty good impression of what was about to happen. Watson’s depiction of the woman was stereotypical and meant to be funny but it didn’t deliver for me the shock value that most of the audience seemed to get. It was unclear what the intentions were behind the scene and its execution was confusing, but the topic of consent is nonetheless an important one. Diamanti, as well as the rest of the cast, are brave for sharing such a personal experience in order to break down stigmas about living with cerebral palsy.

This is the Point challenges misconceptions about people with disability in a funny and relatable way. The performers create a bond with the audience by depicting real moments from their lives.  Their openness and unbashful humor are what makes this show important and memorable.

Technology has greatly changed the way humans interact with each other, and the performers of This is the Point use it in both familiar and unfamiliar ways to tell us their stories. The cast is composed of couple Tony Diamanti and Liz MacDougall, and parent Dan Watson. Watson’s partner, Christina, and their children feature in the play through the projection of video and text conversation. Audience members take the night to learn about people with cerebral palsy, as well as the people around them. 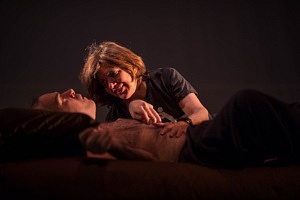 The play is made up of re-enactments of real events, playful discussions about technology, and audience interactions. Throughout the performance, we learn about Diamanti and MacDougall’s relationship from their first impressions to their deepest bedroom desires, whether or not we are prepared for it. Watson shares his stories about learning to work with Bruno’s cerebral palsy and the lessons he learns from friends and castmates Diamanti and MacDougall every day. The set is home-like and welcoming, but with just enough touches of projection and video (Melissa Joakim) throughout the show to bring us back to the theatre space. The mix of technology and coziness works in the company’s favour when Watson’s own home videos are projected to give the audience even more chance to connect to his story.

The experiences of people living with disability are all shown through the performance; However heartwarming the play may be, there are also moments of intense and almost unbearable violence to counter the possibility of getting too comfortable. 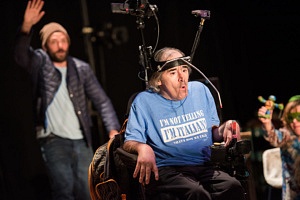 On February 14th, the first night of Ahuri Theatre’s performances at the FirstOntario Performing Arts Centre, the ensemble experienced some technical difficulties. A live camera intended to show the audience how Diamanti uses his letter board was unusable for the night due to a loose wire. However, Watson thought on his feet and instead brought volunteers from the audience onto the set to stand next to Tony and share what they saw with the rest of the audience, bringing a different level of interaction to the performance. This was extremely successful and gave yet another chance for us to be with the performers in that moment, blurring the divide between audience and performer.

This is the Point intends to challenge the stigma of talking about and to people with disability. It covers love, abuse, sex, and more in an hour and a half. Technology can only go so far, and it is obvious when you realize that hours of online research on disability cannot compare to the stories shared by this cast, and the result is incredible.