For their final review of the term, the DARTcritics class of 2017-18 caught Machine de Cirque at the FirstOntario Performing Arts Centre. This is the group’s first time reviewing a touring show – and a circus show, to boot. While individual responses varied, none were without passion:

Hugh Jackman may have played the greatest showman on film, but that title truly belongs to the five performers of Machine de Cirque. Featuring incredible acrobatics, hilarious comedy, and a bizarre looking set that serves as their Circus Machine, this show is incredible. 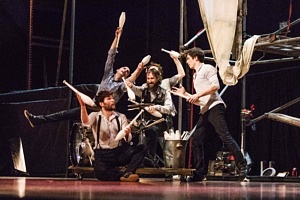 The majority of the show’s music is handled by musician Frédéric Lebrasseur. Following an opening piece that used improvised instruments reminiscent of Stomp (but with more back flips), Lebrasseur mostly uses a drum set and ukulele throughout the show. At some points, he goes comically over-board with his drumming and the other four performers rush to interfere, going so far as to lift him and his drums into the air as he continues drumming without missing a beat.

The other four performers each have a chance to display their own unique skill sets throughout. The first is Maxim Laurin, who displays an incredible amount of skill with the trapeze. Not only does he swing seemingly effortlessly from it and do flips, he also hangs off of it by his feet, dangling upside down like a bat. Ugo Dario breaks the fourth wall and performs mime as he brings a woman from the audience on a date, using his fellow performers as movie theatre seats, a table, and even a surprisingly convincing motorcycle. Yohann Trépanier does amazing tricks while riding a bicycle – backwards and upside down, and even treating it like a unicycle.

This leads up to Raphaël Dubé riding around on a series of unicycles, each one taller than the last by absurd amounts, and played for as much comedic effect as possible. The four also take turns juggling and launching each other into the air – sometimes simultaneously – with a teeter-totter, an excellent grand finale to a show that had already delivered a large series of impressive acts.

You may have seen a video circulating on social media over the last few years of a pair of men called Les Beaux Frères performing tricks with towels while naked. Well ladies and gentlemen, those two are Yohann Trépanier and Raphaël Dubé and the towel trick now includes four of the five performers (the musician stays out of it), and is even more hilarious live than it is in the video.

Words cannot express how exciting Machine de Cirque is. If you are looking for something unique to entertain you for an evening, then this show is perfect for you.

This past Wednesday, the rescheduled performance of Machine de Cirque’s self-titled show went on to a full house at the First Ontario Performing Arts Centre in downtown St. Catharines. 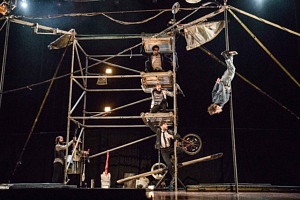 Machine de Cirque is a Quebecois circus company dedicated to creating interdisciplinary circus centred shows. Machine de Cirque is the company’s first and only show since their creation in 2013, written by Artistic Director Vincent Dubé. It features the talent of circus artists Raphaël Dubé and Yohann Trépanier of Les Beaux Frères, and teeter-totter acrobatic duo Ugo Dario and Maxim Laurin as well as a live musical score composed and performed by Frédéric Lebrasseur.

Machine de Cirque centres around five men living in a post-apocalyptic junkyard where they’ve created a machine, which serves as a backdrop for their acrobatic acts. The set is a looming metal pipe structure, outfitted with window frames that drop and slide across pipes like monorails, a drop curtain for projections, a swing, and a dynamic percussion set.

In between group acts, each artist takes a turn in the spotlight: Laurin displays his talent as an aerial artist with the swing; Trépanier demonstrates his acrobatic ability on a moving bike; Raphaël Dubé takes centre stage on several unicycles, each increasing in height; and Dario… makes women uncomfortable? 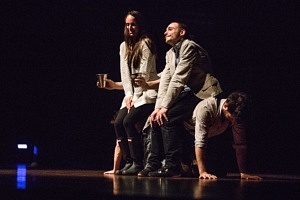 In his solo segment, Dario selects an audience member to be his “date.” The woman he chose at the St. Catharines performance was fairly shy, and reluctant to even join the cast on stage, but played along nonetheless. At the end of his segment, Dario and his date reached the well-recognized moment at the end of a date where they aren’t sure whether to kiss or just hug. An iconic romantic comedy moment—I’ll give it that—but the audience member was clearly unwilling. She turned away repeatedly when he puckered his lips at her and continuously tried to kiss her despite the consistent rejections. Eventually, he gave up and allowed her to kiss him on the cheek before saying good-bye, but the whole situation left a sour taste in my mouth.

We’ve reached a cultural moment where the topic of consent is at a forefront in the media and people’s minds. I have to ask: Where does consent factor into audience participation and performance? Does getting on stage mean you consent to whatever the show throws your way?

Machine de Cirque is a fast-paced, high-energy show led by the wit and talent of its artists. It keeps its audience on the edge of their seats. Unfortunately, Machine de Cirque does that at the expense of furthering the narrative that it’s okay to push women’s boundaries for entertainment.

What goes up, must come down, right? So you would think. Or how about: they won’t go there, there’s no way— yup. They just went there.

Those are just a fraction of the thoughts I had watching this wonderfully skilled Québec City troupe effortlessly bounce their way up to incredible heights, dazzle audiences with all sorts of acrobatic stunts, and yes, even go nude at one point, juggling a set of towels around their… areas with a rare mix of humour and skill.

After some minor rescheduling, Machine De Cirque finally takes on St. Catharines, downtown at the FirstOntario Performing Arts Centre’s Partridge Hall, and was very much worth the wait. Having its humble beginnings in Québec City, artistic director and founder Vincent Dubé premiered this hit production in May of 2015, which has been touring the globe ever since. According to their website, performers Yohann Trépanier, Raphaël Dubé, Ugo Dario, Maxim Lauren, and Frédéric Lebrasseur have performed Machine de Cirque in some twenty municipalities across Canada, and nearly 50 cities in countries all over the world. 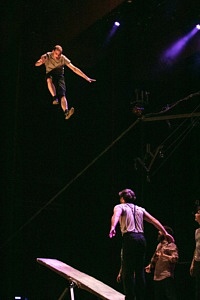 The show itself is a living, breathing spectacle. What kicks off as a series of impressive acrobatic feats, mingled with Lebrasseur’s wild drumming, gradually transforms into a heavily physical yet theatrically entertaining performance that is playful, daring, and exciting to the very end. I especially love watching shows that dare to risk, where so much can go wrong, but it never does. Two moments really encapsulate this feeling: The first was when performer Ugo Dario brings a member of the audience onstage, and does a speed-dating routine with her as the other performers shape-shift into chairs, motorcycles, and various other objects. The other was watching all the performers go nude onstage, tossing towels back and forth to each other in a comedic attempt to cover themselves. My heart dropped to my stomach every time they came close to dropping the towel. That was the brilliance of their risk.

Bottom line: the crowds are frantic with excitement, the tension rises, I’m at the edge of my seat, the two drunken women sitting behind me exchange some commentary to each other while a mother and her two children run out of the auditorium— the theatre has come to life.

This isn’t your typical circus show. Far from it. Forget performers in leotards swinging off a baton or through a hoop. Every acrobatic stunt is pushed beyond its limits and amplified into something greater in each moment. These guys defy the laws of physics in their agility, daring, and poise. Their next performance is in Rivière-Du-Loup, Québec, at the Centre Culturel Berger. See it to believe it.