The Welland Canal Plays with History, Heritage, and Heartbreak 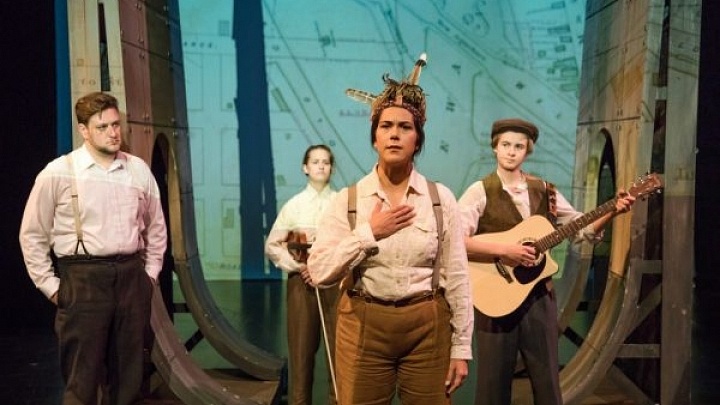 In celebration of this year, Canada’s 150th anniversary, Essential Collective Theatre (ECT) recognizes the most paramount industrial trade route in Canadian History. Guiding ships from the shores of the St. Lawrence River into the vast openness of Lake Ontario, this monumental canal travels through St. Catharines, across the Welland River, and into the heart of Lake Erie. It is a route that has continually shaped Canada’s economy, presence, and identity since 1829.

On October 18th, at the FirstOntario Performing Arts Centre, I had the pleasure of watching ECT’s production of Kevin Hobb’s The Welland Canal Play. Directed by Monica Dufault, Hobb’s play invites us to travel through time from the early days of the Welland Canal, heeding the tale of businessmen, working class families, immigrants, and the Mètis. Their experiences inform their influence that had shaped the Canal’s history and the ongoing Canadian spirit.

Original musical accompaniment and songs, composed by Landon Doak, combined with the choreography drives the aesthetic foundation of each story. The shift in time periods, depicted by the onstage projection of each year in question, provides visual aid that keeps me at pace with the story at each critical moment. Keeping up with such swift changes is oftentimes, personally, a difficult feat, especially with those productions that shift from multiple time periods as frequently as this one does. Though this artistic choice may seem obvious, it does not intrude the overall dynamic of the play. This creative decision involving projections would not be possible without the collaboration between the production’s Technical Director, Tommy Hurst, and Video Designer, James McCoy. Without their intervention, the rather overwhelming changes in scenery – and the fact that six actors each played five characters or more – would obscure many critical moments.

Additionally, the museum-like quality of the theatrical space itself compliments the historic theme. During intermission, I made my way to the concession to get a drink. On my way out I noticed pictures of the canal and the people of the time; various facts accompanying them, and I find myself learning about things only briefly mentioned in the play itself.

The Welland Canal is ingrained within a rich history of both economic prosperity and socio-political turmoil. As the self-titled Welland Canal Play, every aspect in ECT’s production represents this dichotomy thoroughly honestly and athletically, and with respect to the diverse ancestral chains that influence its historical weight. 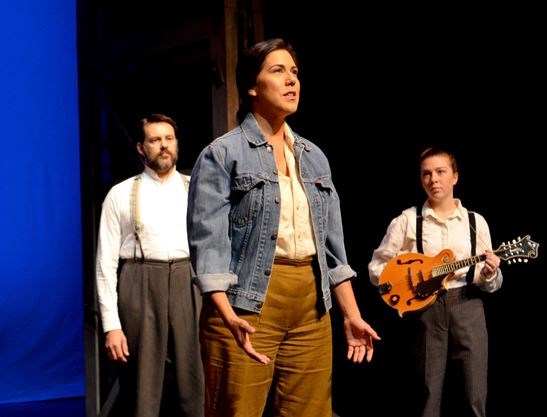 It is quite clear from The Welland Canal Play’s opening scene that this play is for the Niagara Region home crowd. The audience’s agreeable laughter when a woman is stuck in traffic as the Welland Canal bridge closes to let boats through makes it clear that almost everyone in the audience has been in this frustrating situation.

Essential Collective Theatre’s artistic director and director of The Welland Canal Play Monica Dufault has carefully accentuated the play’s non-linear story from a variety of different viewpoints to stress the importance the Welland Canal has had for its surrounding communities. The episodic nature does start to get frustrating by the end of the first act, however. With so many different storylines, many of them feel sharply cut off. This is particularly frustrating when trying to understand the historical side of the play. The play redeems itself during the second act, when the storylines do not feel as though they are chaotically jumping around, rather presenting an opportunity for these plotlines to tie themselves together into a conclusion.

The ending of the play really stuck with me. We are brought back to the first scene of the play where the woman stuck in traffic – Marissa, played by Nicole Joy-Fraser – ends up being late for her first day at a new job. We discover that this new job is actually at the Welland Canal. Marissa and her boss Roy, played by Darren Keay, hold out a rope in which she unfortunately gets tangled in. In the confusion, Roy falls and nearly dying, but shakes it off fairly quickly, noting how this Canal has seen worse things; in this moment another scene taken from historical accounts, in which two young boys drown in the canal, comes to mind.

When first sitting down in Robertson Theatre, I was skeptical of how much I, as someone not only new to St. Catharines but to Canada as well, would be able to understand or relate to a play to close to its local community. I was pleasantly surprised. Whether it be the non-linear approach to history, or nostalgia for home, everyone will be able to take something away from this play.