A complex web of secrets: Stratford’s “All my Sons” sometimes entices, sometimes confuses

While viewing the Stratford Festival’s production of All My Sons by Arthur Miller, at one moment I found myself on the edge of my seat, the next on the brink of sleep. Though the script is chock-full of gripping tension, shocking deceit, and skeletons in the closet, the structure of the show is like that of a ping-pong match between enticement and dryness. 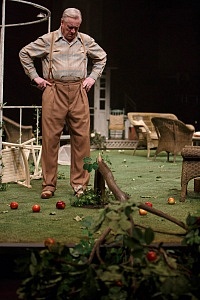 The arc of the story is an unravelling of haunting, painful truths. We are introduced to Joe Keller (Joseph Ziegler), a successful businessman living in a cozy American suburb with his wife Kate (Lucy Peacock) and their son Chris (Tim Campbell). Outwardly, they have only one unhappiness — the loss of the family’s elder son Larry, who went missing in WWII. Kate still clings to the hope that he will be found but everyone around her, including Larry’s fiancée Ann (Sarah Afful), has let him go. Chris has secretly arranged for Ann to visit the family home and upon her arrival, Kate becomes suspicious of her reasons for coming, as Ann’s father went to jail for a crime while working in Joe’s factory. What follows is a profound test of the family, prompting the question: just how tight are the ties that bind when faced with past sins?

Set designer Douglas Paraschuk paints a vivid picture of the Keller’s lush green backyard where the action of the play takes place. The simplicity of the set elements, such as the quaint white gazebo at the edge of the stage and the faux back entrance into the Keller home, contrast the intense emotions conjured by the play’s major themes. Staging this show in the round at the Tom Patterson Theatre was an exceptional choice: being able to see other audience members across from me made me engage more with what was happening onstage. There was a feeling of being an outsider looking in on the life of a seemingly ordinary family, which becomes discomforting when things start getting sour.

The connections between scenes threw me off balance — one moment Kate has it out for Ann and berates anyone who tells her Larry isn’t coming back, then not even five seconds afterward, the family and Ann talk of going out to dinner and reminiscing about the old days. This back and forth is jarring but I recognize that this may be due to the script itself and not Martha Henry’s directing choices. The actors are impressive in being able to maneuver the emotional hoops that Miller has them jumping through, especially Peacock. She communicates a strong motherly aura and convinces in navigating the complex emotions and situations that Kate is forced to cope with: losing a son, keeping her husband’s secrets, and protecting her family at all costs.

While the ending had me weeping for the folly of man, the character relationships and interactions in this production are an emotional and chaotic dance that sometimes confuse rather than entice.