The Intelligent Actor’s Guide to The Shaw Festival: A Chat with Ben Sanders 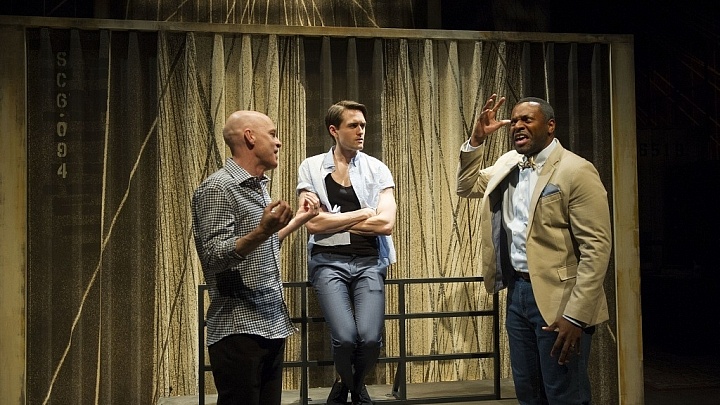 The Shaw Festival is coming into the last few months of its season, but it is not too late to experience the energetic and captivating ensemble work of the casts of both The Intelligent Homosexual’s Guide To Capitalism and Socialism and the Key To the Scriptures (my review of which you can read here) and The Divine: A Play for Sarah Bernhardt (reviewed by my co-critic Elizabeth Amos here). What a marvellous experience it was to see iHO earlier this summer, made all the better by being able to sit down with actor Ben Sanders and discuss his work in both iHo and The Divine.

ALEX: Thinking back to your first season with the Shaw Festival, how has your Shaw experience evolved over the past six seasons?

BEN: Shaw is wonderful for a young actor because they invest in the company members; they invest time and resources in developing their company. I had the ideal experience: started out first holding a tray as footman with three or four lines; then the next year they gave me a few more lines and then the next year quite a few more. It’s sort of cyclical here. Shaw really develops you into being apart of a true ensemble, so when the time is right then you’re playing the central role and then another year you’re doing your absolute best in a very small role. Last year I did a non-speaking role and a smaller role but they are both roles that I was really passionate about, things that I really wanted to get involved with.

ALEX: What shows were they?

BEN: It was Cabaret, and The Sea by Edward Bond. I’ve had a fabulous mix of plays – I’ve gotten to do a few classics: three Shaw plays, an Oscar Wilde, Somerset Maugham, a Terence Rattigan, and I’ve also gotten to do some newer Caryl Churchill. Now I’m working with Tony Kushner with iHO. It has been a really exciting journey since I’ve been able to do work with plays that are at the center Shaw’s mandate and also the stuff that’s on the fringes.

ALEX: Can you describe Eda Holme’s directing style? How was it working with her?

BEN: Oh I love working with Eda, she’s the person I’ve worked with the most in my life. She has a great mind – a real intellect – and also a real sensitivity to the work. The research she did for iHO was really tremendous, as she read most of things referenced in it: from Marx to Mary Baker Eddy, to the theology of Marxism, and the history that is inherent in that. Eda came into the rehearsal space with a huge wealth of knowledge about the play, so she’s a great resource for actors in that sense. She loves to learn, loves to challenge ideas, so working alongside with Tony Kushner – it’s a perfect marriage. Eda’s really great at having all that intellectual and social perspective, and being able to let that go and make action out of it. It’s all there to inform the action of the play and the relationships between the characters. She’s very sympathetic to actors, she very good at facilitating performances. You can’t just tell actors how to do it on stage because you won’t get the same result; you have to lead them on the way, and lead them on a task and towards their best a version of their role. Eda’s very smart about that the work she does; and for Jim Mezon and Fiona Reid it was some of their best performances.

Steven Sutcliffe as Pill and Ben Sanders as Eli in The Intelligent Homosexual’s Guide to Capitalism and Socialism with a Key to the Scriptures. Photo by David Cooper

ALEX: iHO has a heavy emphasis on homosexual and polygamous relationships. What sort of parallel is the show trying to illustrate between these two “tabooed” identities?

BEN: Capitalism has changed relationships – and it’s not entirely clear to us how – but the hyper capitalist society that we live in now has affected everything. Gus says in the play “Money is the air and the water”; everything out of there has monetary value now and it has certainly changed the way we that we love people. The conundrum that Eli presents is that on the one hand he is selling what is arguably the most precious thing to him in the world: showing his body and selling his love. On the other hand, he’s in a way – from a Marxist and Neo-Marxist perspective – he’s taking control of the means of production. He has liberated himself from an old view of love and what it means to him. My character says to his romantic lover Pill, “Marry me, it doesn’t have to be forever”. The meaning of marriage not so long ago was “forever”; that was the only point in getting married, to make a permanent commitment, and it’s really interesting in the play that it doesn’t draw any easy conclusions about relationships. None of the characters, expect for Sue who’s very practical, seem very grounded in reality – their hearts are on an idealistic plane. They are either dreaming of a post-revolutionary state, or in Empty’s case she wants to be a Democratic president. Even Adam is a real idealist, he’s the ex-husband romantic in the basement. With relationships, our idealism often gets in way of us really just seeing each other.

ALEX: Did the show enforce or challenge any of your ideals? How did they change before and after rehearsal?

BEN: It sure did! I spent a lot of time doing research, specifically into sex work and leading up to the show I read a lot about modern sex work and how it has changed so rapidly, really thanks to the Internet, in the past ten years. Even in iHO, we – Pill and Eli – met on Craigslist. Now you probably wouldn’t get find someone on Craigslist, you probably need just need an app for that.

It has changed so rapidly and, in some ways, empowered sex workers – or it’s started a new breed of sex workers, especially amongst men. For whatever reason most of the guys are quite educated, quite talented in many ways, and don’t present the image of the desperate streetwalker we might have in our heads. There’s not a lot of options for this generation in the sense that it’s a lot harder to get into nice jobs, and it’s the men who find it less demeaning to have sex with a couple people a few times a week than to work on minimum wage job that it doesn’t mean much to. In fact, people can find sex work rewarding and helpful; but on the other hand I personally feel that there are still a lot of people who are very vulnerable who are taken advantage of through sex work. I don’t like our current legislation on sex work at all; I think that it endangers sex workers, which should never be the goal.

Yes, iHO has changed my perspective in terms of money. Politics is a tough one; it’s going to stew in me for a long time. Kushner talks about there being a moral obligation to hope. We have a duty to be hopeful for the future, and at the end of the play there is a tremendous amount of hope. It’s really interesting because I know a lot of people in the arts and in Canada who have soft Leftist views, so it was really great to encounter hard Left politics as well as the hard Right-Wing politics that are in our day to day lives. iHO drives the point home, in what the difference is between having a political opinion, then taking political action, and what it means to the individual person.

A fabulous way to book-end my experience with iHO, as well as my work this summer with DARTcritics. You can see Ben Sanders at the Shaw Festival in The Intelligent Homosexual’s Guide to Capitalism and Socialism with a Key to the Scriptures (closes October 10) and The Divine: A Play for Sarah Bernhardt (closes October 11).