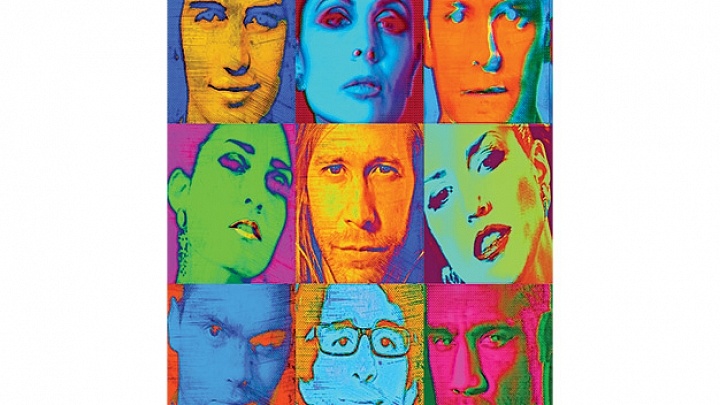 The title Love + Hate sums up my feelings towards the brightly costumed but darkly delivered doomsday pop-musical at SummerWorks this season.  Performing in the Factory Theatre Mainspace, The PepTides deliver their upbeat take on what is wrong with humanity in the form of a five-part harmony interspersed with quick, quirky scenes.

Made up of singers Olexandra Pruchnicky, Deedee Butters, Rebecca Noelle, Dale Waterman, Claude Marquis and band members Alex Wickham, Andrew Burns, Scott Irving, and Juan Miguel Gomez Montant, The PepTides deliver high energy performances and exaggerated dance moves.  The intent of the performance is to highlight the hypocrisies and uncomfortable impulses that humanity seems incapable of escaping. I gathered this from the four short scenes dispersed among the music which include a young girl’s prescription for rose-coloured glasses from a concerned eye doctor, a job interview more concerned with sex than skill, and a retired primatologist’s theories on the origin of the human drive.

The music may have been related to the stories told throughout these scenes, but it is hard to tell as the performer’s lyrics are inaudible.  Whether this is the fault of poor diction on the part of the singers or a flaw in the sound design, the result is the same.  Though the singers are extremely talented and handle difficult riffs, harmonies, and powerful notes with ease — each accomplished soloist as well as group members — the distraction of not understanding them makes the entire performance hard to follow.  While the music is fun and upbeat, it is difficult to comment on the success of the production, or the congruity of Claude Marquis’ music and Scott Irving’s script, when I was unable to understand so much of it.

The scenes themselves are unable to make up for the shortfalls of lyrical clarity.  While they achieve a purposeful unsettling quality, transitions from song to scene are clumsy; the strength of the performers definitely leans towards singing over acting.  Ultimately, the frustration resulting from an already ambiguous premise inexplicably linked to ultra-loud party tunes leaves me regretfully disappointed about a production whose vocal talent I have so much appreciation for.

Sending mixed signals — some intentional, some not — Love + Hate and the PepTides are getting an equally mixed message from me in return.