Shrödinger’s Magazine: “the marquise of o-” Is Tabloid Pulp With Purpose 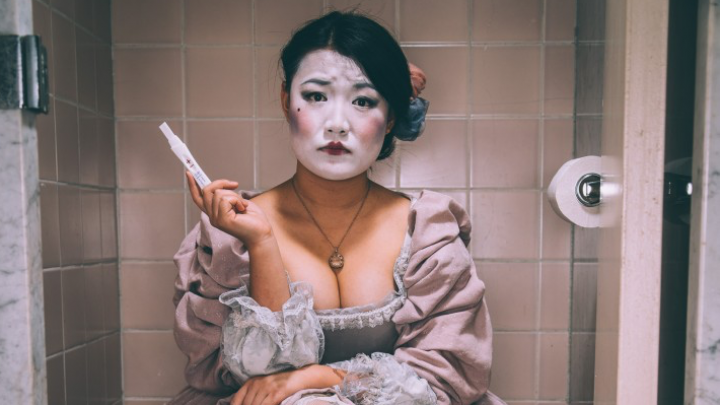 Is Shrödinger’s rapist still a rapist if the box hasn’t been opened yet? That’s the question the red light district is looking to answer in their updated take on Heinrich von Kleist’s 19th Century short story, the marquise of o-. Playing in the Factory Theatre Mainspace during Toronto’s SummerWorks Festival, marquise is a multimedia collaboration from adapters and directors Lauren Gillis and Ted Witzel that explores the (dubious) life of the 19th Century Marquise of O and her mysteriously conceived pregnancy. Through the lens of the tabloids – complete with camera close-ups and bleeped out names – marquise examines the incident through the eyes of each of the Marquise’s family members, and leads audiences to question whether reality can ever be more than mere perception.

Attacked by a group of men during a palace raid, Marquise Julietta (Rong Fu) is saved from assault by a dashing Russian Count (Kaleb Alexander). He rushes her to safety and, upon deliverance, she promptly blacks out. Reunited with her family, Julietta is moved by the Count’s declarations of love for her but remains concerned that things are moving too quickly. At her family’s request she agrees to consider the offer; she soon learns, however, that she is inexplicably pregnant. Julietta’s mother (Eve Wylden), father (Richard Partington), and brother (G. Kyle Shields) initially feel betrayed, certain that she’s being untruthful about her unknown impregnator. Through a series of plots and tricks, the family is reunited and Julietta vouches, through a newspaper ad, to marry any man who comes forward as the father of her baby. To her horror, it is revealed that the Count she placed so much trust in is responsible and she grudgingly marries him, eventually finding happiness with the man she called a monster.

Told in a fragmented, meta-theatrical style that pushes against a semblance of theatrical “normalcy” – even equipped with a complete departure from linear narrative in the form of a Kantian philosophy lecture – this reinterpreted production of an 1808 short story, already obscure in its original era, is delightfully imaginative. Camellia Koo’s set design is clean and full of limitless possibilities: the same three-doored panels effectively transform into multiple locations and a versatile mattress serves as warp point between them. Video design by Wesley McKenzie in combination with sound and lighting design (Christopher Stanton and CJ Astronomo respectively) evoke images of high-media pop culture, using live-camera feeds and textual projections to capture the “source-confusion” of a technological age in which anyone with a cell phone has the ability to make their personal truths public.

An updated approach to storytelling does not an updated story make, however. The inability to pin the count as a rapist, the desire of Julietta’s family to see her married to him, and his eventual success in convincing her that what he did was all for his love of her is a timeless (and deeply problematic) tale. Despite wonderful performances from cast members and an excitingly creative production, I was still unable to find enjoyment or catharsis in the ultimate futility of the Marquise’s plight. Perhaps that is the company’s intent; when everyone is saying something, nothing is concretely anything. In the case of Schrödinger’s rapist, like the cat, he both is and isn’t until you look inside the box. In the marquise of O-, the opening of the box is left to us.