Much Closer to the Fringe: “Much Ado About Nothing” at the Hamilton Fringe 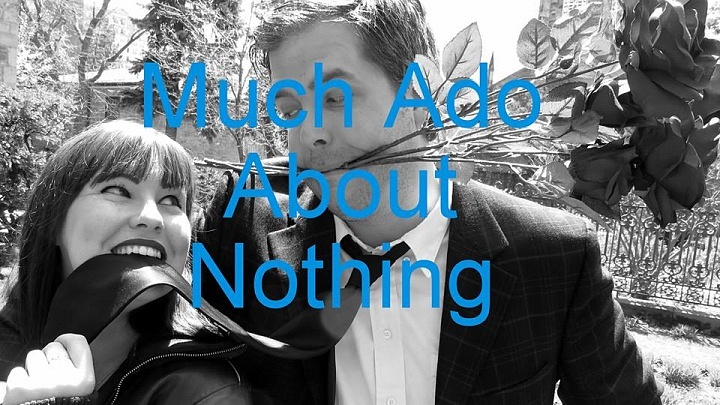 If you hate having fun, don’t go see Much Ado About Nothing by Make Art Theatre at the Hamilton Fringe Festival. This show is stuffed with good times, including villainous capes, ‘50s style greasers, and a really funny bit with some popcorn (spoiler: it ends up all over the floor). A condensed and updated version of Shakespeare’s play, Much Ado is full of great ideas, although they don’t always work together cohesively.

Shakespeare “modernization” is pretty common, particularly in smaller companies; this isn’t what makes this show unique. What does make it interesting is Make Art Theatre’s embracing of a more robust and thorough de-Shakespeare-izing of the piece. Other than the words, it’s barely Shakespeare, not through the lens we normally see it under. It’s Shakespeare for a fringe festival: choppy, lively, and a little half-baked. Characters range from contemporary “maidens”, to 1950s gangsters, to classical buffoons and the world they inhabit is just as far-reaching.

The play feels like a patchwork quilt of ideas, time periods, and styles, and it almost all works. There’s just a bit too much going on for it to feel like a fully realized adaptation. I kept wondering what the point behind many of their theatrical choices were; I’d like to see Make Art Theatre take a hatchet to the piece and cut away all the excess to find what their central opinion or commentary on the source material is.

The true strength of the production lies in its secondary characters. Esther Huh is particularly hilarious as Dogberry, an honest-to-goodness cop with a serious chip on her shoulder; I’m not sure if her harping on about being called an “ass” is plain annoying or comedic genius, but it gave me a serious case of the giggles. Ryan Sero and Steve Siemens are a pair of cartoon villains as Don John and Conrad, accompanied by evil claps of thunder. While Don John may be Much Ado’s main antagonist, in this condensed version his role is rather marginalized, only adding to the production’s humour.

I only wish the central romantic story were as strong as these borderline moments. In the case of Beatrice and Benedick, played by Laura Ellis and Tyler Brent, the company’s move away from a more “traditional” Shakespearean style has also included a removal of the built-in back and forth between the lovers. Beatrice and Benedick entice each other with wordplay – not unlike Kate and Petruchio from another of Shakespeare’s plays – but their somewhat slapdash delivery of their many argumentative scenes gets repetitive and doesn’t seem to build to any point of emotional climax. As the title suggests, Much Ado is essentially a play about nothing – a minor misunderstanding and bunch of frivolity followed by a wedding. This means the success of the main story, and the audience’s emotional connection to it, hinges on the performance of the lovers.

Despite (or perhaps because of) its problems, Much Ado About Nothing by Make Art Theatre is what fringe theatre is all about: a rough-cut, original idea that needs polishing but still manages to entertain audiences and engage them in a unique world. Much Ado is by no means a great show – far from it – but it possesses such an infectious air of fun that I couldn’t help but laugh along and jump on board. I’d love to see the piece again – perhaps a little more streamlined and with the assistance of an acting coach – and get caught up once more in its crackpot and surprisingly refreshing world.

“Much Ado About Nothing” is playing at the Theatre Aquarius Studio at the Hamilton Fringe Festival on July 26th at 6:00pm.