Deliverance: “The Postman” Travels Through Generations of Discrimination and Emancipation 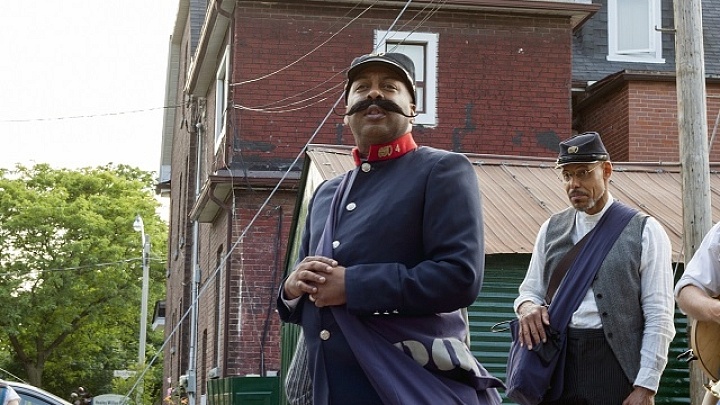 “This river I step in is not the river I stand in,” postal worker Albert Jackson reads from a sign on his daily route; what feels like a misplaced line of poetry soon sets up an entire performance. The Postman, based on the trials and tribulations of Toronto’s first black postal worker Albert Jackson, is a show that offers much more than a history lesson. The Postman draws attention to the idea of multiculturalism, racial inequality, and what it means to be a black person living in the city of Toronto.

Let me explain: at the top of the show a young girl asks Jackson if she can accompany him on his route; we then move through the memories of Jackson and his parents’ past. The story not only follows Jackson’s journey navigating the institution of Canada Post, it also follows his parents’ journey to freedom as they travel to Toronto through the Underground Railroad. Flipping between generations, we see the hardships both Jackson and his parents endure. This framing device creates a dialogue between three generations: Jackson, his parents, and the young girl who accompanies him.

It’s fascinating to watch the generations of the past mingle; this show displays black men and women fighting inside systems of vast inequality. The kind of oppression Jackson’s parents faced as slaves is different than the kind of oppression he faces as a “free man” working inside a postal office, and no doubt the oppression Jackson faces will be different than the young girl accompanying him throughout the production. As runaway slaves, Jackson’s parents struggle physically: lost in the forest, slave traders in hot pursuit, Jackson’s mother places her hand across her youngest daughter’s mouth, hushing her daughter’s cries of starvation and dehydration. Jackson too experiences physical torments, but in a different way: while facing a mob of angry white postal workers on his first day of employment, Jackson is slapped in the face. Jackson doesn’t fight back, but neither does he give up his postal bag. Later, when Jackson meets another marginalized postal worker from India the show makes reference to Jackson’s practice of nonviolent resistance in the pervious scene. These scenes make me wonder, what type of fight is the next generation facing?

Blues music performed with immense spirit by the ensemble breaks up the story. At one point, audience members are pulled from their seats to dance onstage, celebrating Jackson’s parents’ escape to freedom. I must admit, at times I felt the music slowed the story’s progression and impeded the audience’s ability to feel the movement of the story. Then again, I must also preface this critique by stating that the performance I witnessed was held indoors due to rainstorms. The Postman is meant to be a site specific performance outside, travelling along Jackson’s old postal route. Perhaps if I were outside, touring the streets of Toronto with a band accompanying me, the musical intervals would have assisted the story by maintaining the suspense and tone of the previous scene. Indoors, they unnecessarily broke up the story.

Regardless of these limitations – it’s not like they could control the weather – The Postman provides key insights into how oppression has been combated by generations before, and raises questions on how new generations will continue to fight discrimination in all its evolving forms. This production has earned the right to say that – in rain or shine – it has an important message to deliver.