Made for TV: Flogging “Commercials for Hamilton” 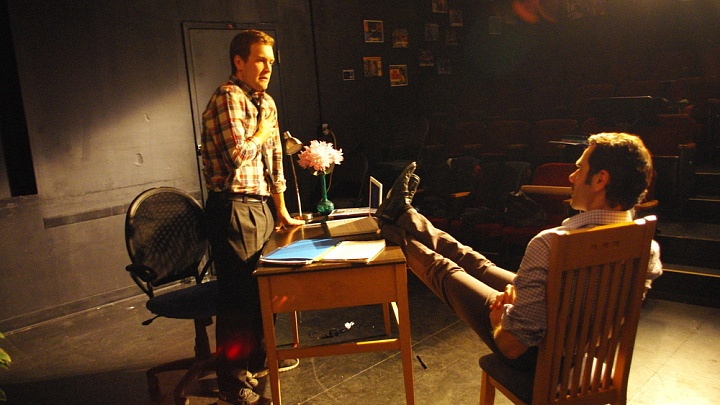 Advertising versus “humane marketing;” head versus heart; the big city versus the smaller city. Commercials for Hamilton, what are you selling?

On the surface Commercials – written and directed by Sky Gilbert – appears to be about two advertising employees (well, one employee and one intern) going head to head about the merits of Hamilton in an obtuse attempt at regionally “relevant” theatre. Beneath this smug surface, however, is something important – I just don’t know what it is. Frankly, the script is bad; angry yelling attempting to pass as gritty realism and violence attempting to pass as comedy drowns out anything valuable the production could say.

The story is as follows: a suave and trendy advertising executive is instructed to head an ad campaign that shows the merits of Hamilton. The only problem is, he hates Hamilton (cue goofy trombone music) for a reason I won’t spoil, despite it being staggeringly obvious ten minutes in. He is paired up with an intern – an eager and grinning Hamiltonian who looks and talks like he’s straight out of a high school production of Avenue Q. The odd couple duke it out over the ethics of advertising, the value of Hamilton, and their own worth as people. Then they find out they’re both gay and sleep together. A “commercial” plays for the audience: the two men wrapped in a rainbow flag proclaiming, “Hamilton: where the people are real.” Lights down; the end. Like the big “secret,” the romantic content is simultaneously painfully obvious and completely out of left field. There’s no real tension between the characters – romantic or otherwise. Actors Andrei Preda and Duncan Rowe scramble to make something out of the pseudo-witty repartee they have been given to work with, but to no avail. I just couldn’t bring myself to care about their characters.

Now I have to stop here for a moment. This is a Fringe Festival production – it’s not meant to be polished, and it’s supposed to be a little off-kilter. I’m an actor in the Niagara Region, and I’ve come to understand how smaller arts communities can feel overshadowed by a larger urban centre like Toronto. Isn’t that then all the more reason to prove to audiences that your community has something important to say? Perhaps that’s why I’m so frustrated by the way Commercials for Hamilton tries to hock a two-dimensional and ultimately un-insightful and unfunny take on Hamilton gay life. I’m simply not buying it. The whole thing reads more like an attack on Toronto’s queer scene than a real look at queerness outside of major city centres. Add to this an overwhelmingly insensitive and undeveloped view on “the working class;” Gilbert all but calls them “good, simple folk” and praises them for their simple, working class honesty. The preoccupation with bashing Toronto and this take on the working class ultimately works against any progressive stance the play may be attempting to take. My criticism of Commercials may be blunt, but Gilbert, I think you need to hear it.

The script is stammering to say something, and I’m not deaf to this. It comes from a very real place – a desire to showcase the “alternative” aspects of other Canadian cities and dismantle notions of class that hold back queer individuals – but it does nothing effective with these desires. Chock full of knowing references to Hamilton icons and not much else, Commercials for Hamilton fails to make its sale.