An Open Dialogue: Letters on “The Watershed”, Part One 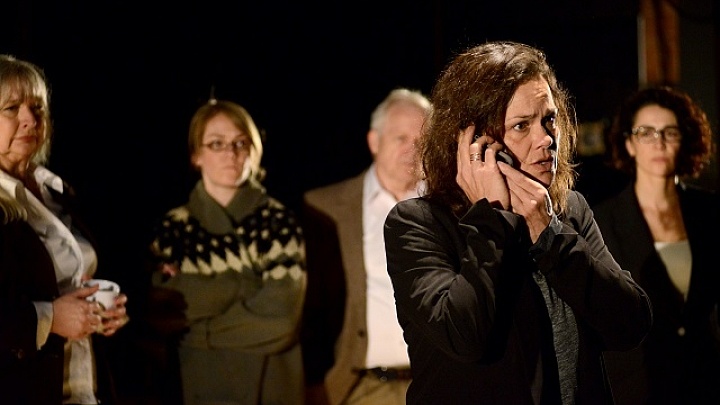 A note from Hayley: Nick and I have wanted to do a joint review for a while now. We were fortunate to both be free last week to see Annabel Soutar’s new piece The Watershed, playing at Canadian Stage as part of PANAMANIA. Keeping in kind with the play itself, which played with the use of Skype, Facebook chat and emails, we thought this was the perfect opportunity to engage in a more traditional type of dialogue and a less traditional type of criticism: letter writing. Here is Nick’s letter to me.

It was great to see The Watershed with you on Thursday. We haven’t be able to talk about the show much, and I have some ideas I’ve been meaning to share with you. So, here we go.

First of all, let’s talk about the script itself: the entire show reminds me of investigative journalism. Like the CBC’s fifth Estate, or the American equivalent ABC’s 20/20, it feels like we are getting access to backroom government dealings, or undercover admittance into the boardrooms of corporations. The show is set up as a series of interviews, projections display the name, time, and place of each interview, and this places The Watershed into the world of investigative journalism.

I don’t usually see this genre onstage, and I think that’s because there’s an implication that journalism doesn’t belong on the stage; the stage is a place for stories – set in magical forests or castles – anything “real” must be boring. And to a certain extent this is true: stories advance towards a type of conclusion, and reality doesn’t.

What makes The Watershed work is its story progression. We see a hero take on an unthinkable task: Annabel (Soutar, the playwright, who is also the protagonist and played by Kristen Thomson) wants to address Canada’s commodification of natural resources by writing a play about water. The hero gains control of her situation: Annabel discovers that there is already a political battle going on in the media between scientists at the Experimental Research Area (ELA) in northern Ontario and Conservative ministers – a battle that she can lend her pen to. This happens only in time for a monkey wrench to be thrown into the mix that complicates everything: Annabel realizes that the closing of the ELA is connected to a greater plan by the Conservatives to liquidate (get it?) environmental restrictions regarding natural resources such as water and oil. So, the hero takes a risk: Annabel travels across the country with her family (and for some reason Watershed director Chris Abraham’s daughter) to see Alberta’s oil sands and interview Conservative party members – and others connected to the sands – along the way. The hero falls and eventually hits rocks bottom: any member of the Conservative party she contacts refuses to comment and Abraham threatens to pull the entire production. It seems like our hero has given up the fight. Then, she decides to risk it all: she writes a play that doesn’t give any definite answers, but rather attempts to start a conversation with the public (since the Conservatives won’t).

What I’m saying is, The Watershed has all the qualities of a well-made play (you know what I mean, but for those who need a refresher here’s a link to a definition). This, combined with our belief that everything being presented is factually accurate, presents a theatrical character journey that one might not get from a cinematic documentary. Is everything presented indeed fact, however?

I have a question about accessibility, and it’s a question that isn’t full formed, but I’m going to attempt to articulate it anyway. The purpose of the show is to create a dialogue, but does the show really do this? Let’s be real, The Watershed is about a lot more than water. The characters of Annabel’s children say this: a watershed is a series of water bodies that drain into the same place. The Watershed asks questions of capitalism, democracy, and the state of the environment in Canada, but it gives us no real tools to navigate these bodies (of water?) by ourselves. Is it the responsibility of theatre to makes itself accessible? I tried doing some research into water before writing this letter, but quite frankly I have no idea where to begin. So, where does the dialogue start? Are the facts Annabel presents – and the accompanying politics – accessible to just anyone?