Stories, A Beer, and More Stories: “A Tension to Detail” in the Hamilton Fringe 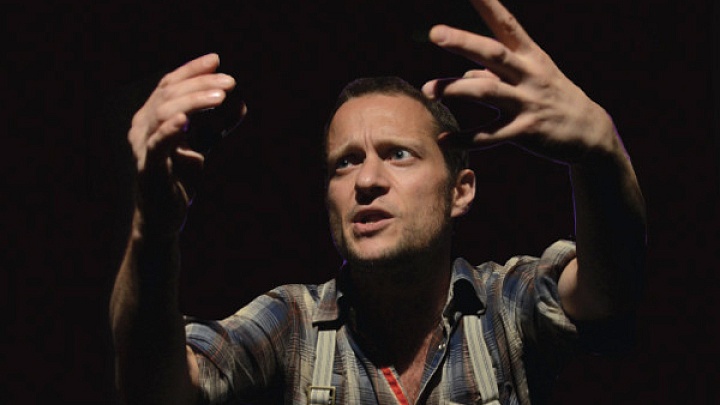 On Thursday night a man with beer on his breath tells me about his troubles.  Broken hearts, broken bones, burned bridges, and a burning building – in a dimly lit room I hear it all. Gerard Harris is the man in question; I am not his friend, his confidante, or his therapist and neither are any of the other 30 people in the room.  In the intimate Theatre Aquarius Studio I am his audience, and his life is my entertainment.

This unquestionably comedic evening is broken up by more sensitive stories.  While no part of the show makes me feel entirely comfortable — Harris’ material is embarrassing and awkward in the best possible way — almost everything is rounded out with a good laugh.  However, details about narrowly dodging sexual assault as a child and a contemplative discussion on the benefits of meditation are not so easily dismissed. Harris is upfront about the fact that although his stories are entirely true, they are not entirely whole, suggesting that the picture left unpainted is darker than the one on display.

Harris carefully and consciously crafts the impression he makes on the audience: quick-witted, quirky, and nonchalant right down to the colourfully labeled beer he casually sips throughout the show.  He also informs us that we do the same in our own lives.  The stories we choose to share make us who are to the world, and this reminder makes the difference between an enjoyable evening’s entertainment and a work of art that will remain with me for a long time.

I am not Gerard Harris’ friend or therapist, but by the end of A Tension to Detail he almost feels like mine.

A Tension to Detail is playing July 23-26 at the Theatre Aquarius Studio in the Hamilton Fringe.