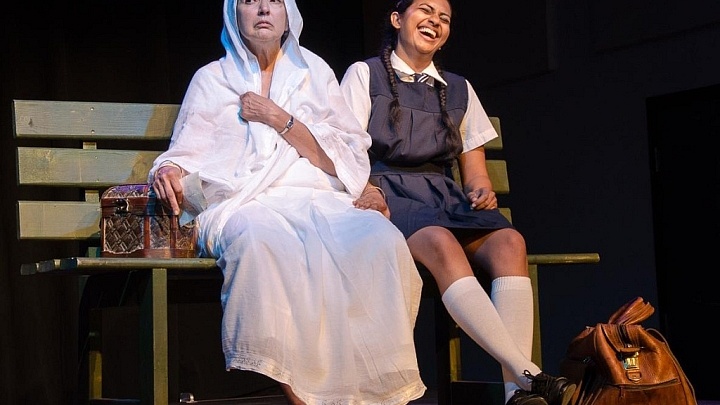 All aboard the Rukmini’s Gold train, stopping now at the Hamilton Fringe Festival. Their next stop? Perhaps a tune-up at the train yard is in order. Radha S. Menon’s play, winner of the 2015 Toronto Fringe New Play Contest, is playing at Mills Hardware this summer in Hamilton.

Presented by Red Betty Theatre and directed by Wes Berger, Rukmini’s Gold imagines what it is like to come face to face with your heritage. It has all the makings of a deeply meaningful piece – a trendy concept, strong characters, passionate performers, and a political agenda to boot – but aspires to hit so many meaningful marks it ends up missing most of them. Rukmini (Dia Frid) sits at Samsara Station in 1960, her worldly possessions packed into two small bags, and awaits the arrival of her train. Arriving instead is a young girl (Maya Huliyappa-Menon) who the audience soon recognizes as being Rukmini’s younger self. Rukmini loses her bags on the tracks, but the girl reminds her she will not need them where she is going. The rest of the nonlinear play follows Rukmini as she observes her ancestors and descendants at various moments of transition in their lives and ultimately comes to the realization that her most valuable treasure – her true gold – is her family.

The piece challenges its performers, as throughout the play most of the cast becomes multiple characters from different time periods and different parts of the world. Clearly aiming for a degree of regional accuracy and authenticity in their accents, there are issues of clarity and consistency throughout the ensemble’s dialect work. The standout performance of the show belongs to Ellora Patnaik, who plays two estranged sisters. Patnaik delivers a stunning and emotionally charged monologue with perfectly balanced suffering and stoicism.

Where the play falls particularly short is in its treatment of the political and social issues it touches upon – and there are a lot of them. Rukmini’s Gold is clearly a play with a message, but the message itself is less than clear. Everything appears to be fair game: class wars; racism; aboriginal affairs; suicide; mental illness; familial expectation; a quick nod to LGBTQ stereotyping; and a questionably brief comment suggesting but never revisiting the possibility of one character being transgendered. Taking on too much, the attention paid to each subject is inadequate to the point of insensitivity and several excerpts that would otherwise be hard-hitting come off as extraneous in a production with a 90-minute run time which already feels lengthy. Picking a more specific focus would increase the meaning to be found in these moments as well as the resolution.

Presented with an air of confidence – they did win Best New Play after all – the tracks have been laid for a far more successful piece to develop. In the meantime, however, I will be holding off from booking my return trip.