Weightless: “Air” is Expanding Horizons at the Hamilton Fringe 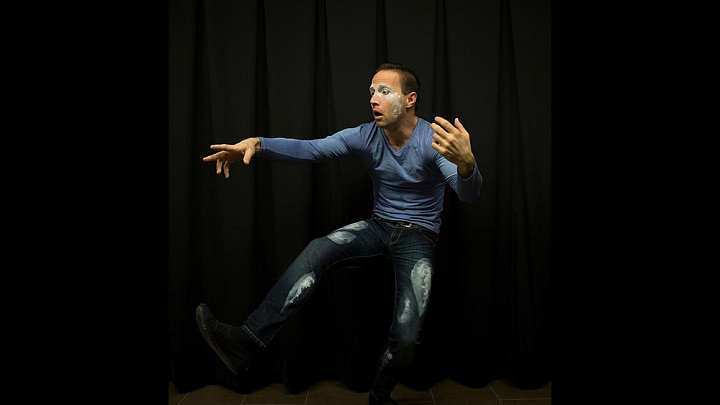 Walking out of the theatre after seeing Air at the Hamilton Fringe, I hear a woman say “Incredible. It’s just him up there!” While she’s technically correct, and means this as high praise, I have to disagree. True: actor and artistic director of Tottering Biped Theatre Trevor Copp performs solo, with no props or set pieces other than two black blocks; but to see this series of vignettes as “just him up there” ignores the multitude of rich characters and worlds created by Copp’s mastery of mime and dance and the intensity of his presence onstage.

I admit, I am perhaps a little biased; I have followed Copp’s work with Tottering Biped Theatre for a number of years and I edited this interview with him, conducted by DARTcritics Nick and Alex, where Copp discusses the decline of mime and physical theatre as a part of Canadian cultural capital. It seems to me that Copp is attempting to call back a type of physical performance that is lost to mainstream theatre audiences. If that is the case, I hope he succeeds, because I want to see more artists doing work like Air.

There is no escaping the fact that mime is barely more than a dead language in Canadian theatre culture; as a result, Air’s audience is learning to “read mime” as we watch the show. Copp recognizes this language barrier, and takes us through a series of pieces that teach us but also challenge us. 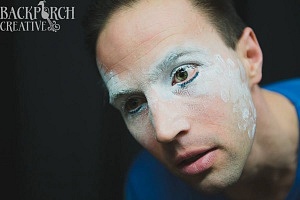 The opening piece, The Novice Swimmer, is accurately titled. Copp introduces us to the conventions he will use throughout the show: he labours over putting on imaginary flippers, making sucking noises as they “hit” the ground. His descent into water is also easily spelled out for us by a clear shift in lighting.

As the pieces progress, however, Copp begins grappling with bigger worlds and larger concepts. The Stupendifying Gigantism of Mr. Small tells the story of an inconsequential man growing large enough to move mountains and reach the stars he loves to watch. It is a mark of Copp’s skill that through simplistic gesture and full-bodied attention to detail he can create an average apartment onstage, shrink it to suggest that he himself has become gigantic, and return it to normal once again.

By the final vignette – a truly masterful piece titled The Stag Hunter, which I was fortunate enough to see previously as a part of In The Soil’s RHIZOMES back in April – we as an audience are fluent enough in mime to decipher the complex and heart-wrenching story unfolding before us. In one hour, Copp goes from teaching us the alphabet of mime to writing poetry with it. As the lights dim on the final piece, there is a weighted silence in the theatre; then, the small audience erupts – the elderly women in front of me actually stamps the ground – both in admiration of Copp’s performance and in thanks for the pains he has taken to teach us this theatrical language.

A slight hiccup occurs with the piece titled That Time I Asked God A Question. Perhaps I looked away for a second and missed something vital, or maybe I’m just not familiar enough with the layout of a church, but I couldn’t follow the story. At one point Copp appears to be the ghost of a freshly deceased man, and there is some wonderful play with the idea of intangibility (how does one indicate intangibility through mime?!), but I admit I was lost. At the risk of using a cliché, it feels a little too “high concept”. And yet, Copp seems to be aware of this particular piece’s challenges: in its final moments the lights warm from blue to yellow and he mutters “…Hunh”, almost as a pre-emptive remark in anticipation of the audience’s response.

Nevertheless, Air is an exceptional body of work. Copp, director Robin Patterson, and the number of artists influencing the work (read more about that here) are bringing a unique and powerful piece of theatre to the Hamilton Fringe this year. As Copp says to the audience following the show, Air is a piece in workshop and needs feedback. I can’t wait to see how Air evolves, and I will be back to see its next iteration equipped with the phrases of “mime language” this performance has bestowed upon me.