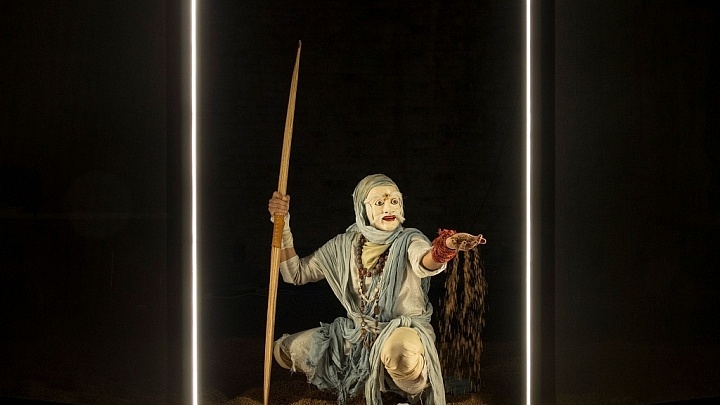 “This story is not going to be real, but it’s going to be really felt,” Ravi Jain, Artistic Director of Why Not Theatre, says in a hokey Indian accent, imitating his grandfather. Dropping the accent Jain goes on, “Stories help us discover our future, and connect us to our past.”

Gimme Shelter, playing at the Young Centre for Performing Arts as a part of PANAMANIA, uses the ancient Indian epic Mahabharata to generate a discussion on climate change, misplaced persons resulting from globalization, and the big question underlying these issues: “What can I do?” While Jain’s story may not be “real”, the connection his show asks you to make with complete strangers in the audience definitely is. Jain doesn’t give any easy answers – quite frankly, with issues such as these, there aren’t any. Instead, he leaves you with a new acquaintance and a new dialogue to take up.

Jain begins by recalling his childhood memories of India: in the evening, his hometown would gather around a fire to listen to his grandfather’s stories and watch as he makes the shadows dance to the beat of his tale. Designer Ken Mackenzie recreates this image for us: the stage floor is covered in dirt, larger than life shadows are projected onto two rotating screens, and the audience is divided in half, seated across from each other in an arena style configuration. It is as though we too are watching a storyteller around a fire – I could see the expressions of those across from me as Jain danced amongst the shadow screens, and lights hit his mask like the flicker of a slow burning ember.

It’s a beautiful show packed with a multitude of dramatic forms – live action narration, mask work, voice-overs, dance, shadow play, even audience interaction – and it blends together a variety of theatrical styles. The story Jain tells of two brothers battling over a kingdom, one a selfish king and the other a naive boy in exile, is broken up with movement and mask performances. This movement and mask work is subtle and slow, and ultimately not that interesting to watch. No matter how hard I tried to focus I found myself looking not at Jain’s performance but at the audience members sitting across from me. “Is this mixture of theatrical styles getting in the way of cohesive storytelling?” I ask myself. “Has Jain’s huge theatrical appetite made him bite off more than he can chew?”

Then the story reaches its climax. After spending years in exile, the brothers see each other from across an ocean. The house lights come up and Jain asks us to bridge the story’s fictional ocean by making eye contact and coming together with a person from across the theatre. I felt like I’d been slapped in the face – in a good way – as everything became clear. This one simple moment answers Jain’s question of “What can I do?” in the face of overwhelming obstacles: you must try to connect with other people, even though it feels like they are oceans away.

Ravi, my advice to you is to take your own advice! Let your story connect us to the past and move us towards the future. At the top of the show Jain gives a curtain speech that, while it informs us of his intentions, tells the story rather than shows it. Jain needs to trust that his beautifully crafted moments – slowly allowing the audience to see each other and then asking them to connect – will prompt the audience to ask the question he asks of us: “What can I do?”

Despite this, Gimme Shelter is a theatrical journey that gives a lot to those that embark upon it; the connection it creates between each spectator, Jain, and a complete stranger is a truly unique and elegant gesture. Who knows, the experience might make you brave enough to continue the conversation with another person, asking together “What can we do?”