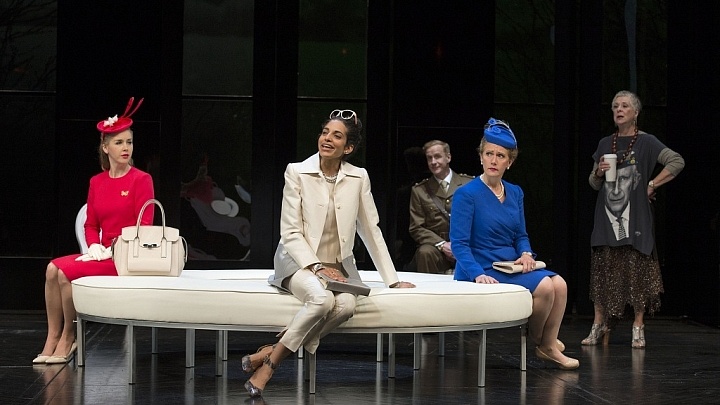 Director Peter Hinton knows how to walk the walk when it comes to revitalizing George Bernard Shaw’s Pygmalion for modern audiences, and his stellar ensemble knows how to talk the talk.

Eliza Dolittle (Harveen Sandu) displays her lower social class standing with terrible pronunciation and articulation that Henry Higgins (Patrick McManus) and Colonel Pickering (Jeff Meadows) take notice of in the busy streets of London. As professors in phonetics, Higgins and Pickering take it upon themselves (on Higgins’ part, in the pursuit of research) to raise Eliza under their roof for 6 months and train her in the ways of an upper-class duchess. Wanting to open up a flower shop one day, Eliza goes along with Higgins’ and Pickering’s plan; she endures Higgins’ eccentric personality and adopts modern fashions provided by Mrs. Higgins (Donna Belleville) – Higgins’ mother – in order to fit the style of a well-mannered lady.

Not only do McManus and Sandu have dynamic chemistry, they also stand alone as powerful performers. When Higgins barks orders at Eliza to fetch his slippers she does so by throwing them square in his nose to assert her dominance as a human being (in a most “unladylike” fashion).

The costume design by Christina Poddubiuk echoes the production’s theme of class separation; in a daring move, Prince Charles’ face is worn as designer apparel by Mrs. Higgins. The set design of Higgins’ studio by Eo Sharp immediately establishes his social standing through wall to wall bookshelves and a plethora of sound-capturing device tools. Even the sound design’s varied playlist by Fred Gabrsek – ranging from pop-star Janet Jackson, to Canadian composer Richard Reed Parry, to Sam Smith – shows that even the kind of music you listen to contributes to your social standing. All of these theatrical elements encapsulate Hinton’s emphasis on class separation in a subtle and effective way.

During set changes BBC segments inform audiences on the qualities that define class division today. Variables such as the amount of friends one has on social media, genres of music one listens to, and one’s relation to teachers or professionals all help to define one’s specific social class. Through the assistance of both the BBC segments on class and a modernized 2014 setting, the audience can relate to Eliza’s struggle in adapting to the world of the upper-class.

The play’s action is centered on the interactions between a man and a woman from different social classes, so the question of how class struggle relates to gender inequality is a crucial one. Hinton begins to address the gender inequality in Pygmalion, but his highlight of growing class separation seems to usurp any debate on gender. Questioning how gender – and even race, seeing as Sandhu is the first woman of colour to play Eliza in a North American production – intersects with class division might be the push this production needs.

Despite the lack of attention to gender or race, Hinton does an incredible job incorporating contemporary class issues and updating Shaw’s Pygmalion for audiences today. What makes this production great, however, is Eliza: she takes the stage by force – we cannot get enough of her – and she remains the same powerful woman both before her transformation and after.