Just the Tops: “Top Girls” is the Shaw’s Best 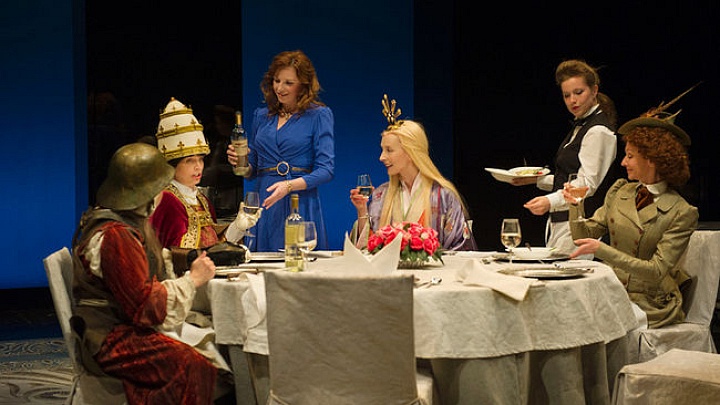 A corporate executive, a female pope, a 13th Century Japanese concubine, a warrior peasant, a turn-of-the-century world traveler, and an obedient Renaissance wife sit down to dinner.  The ensuing conversation is the iconic set up for Caryl Churchill’s feminist examination, Top Girls, playing this season at the Shaw Festival’s Court House Theatre under the carefully crafted direction of Vikki Anderson.

We are invited into the characters’ dressing room as observers of the various ritualistic preparations women throughout history – and in our own time – take part in.  The transformation from physical neutrality – courtesy of wig caps and white robes – to the distinctive dress of each character’s class, time, and function brings to mind the ways in which women can be both empowered and oppressed by a choice as seemingly simple as what to wear.  Characters and costumes shift throughout the piece, seeming to indicate each woman’s ability to choose who she will be to the world. Through the imaginative set design of Sue LePage, the dressing tables transform into office desks and bridge the gap between the private and professional sectors.

Meeting to celebrate the recent promotion of the inspirational and career-focused Marlene (Fiona Byrne) at a 1980’s employment agency called “Top Girls”, it soon becomes apparent that the successes of these exceptional women throughout history are not without sacrifice, as each realizes the misery that has become the product of their success.  Their worlds are not designed for a woman to excel without consequence.  The coarse and lower class Dull Gret (Laurie Paton), educated Pope Joan (Claire Jullien), and wistful adventurer Isabella Bird (Catherine McGregor) – among other guests – are unable to set aside their self-interests in order to relate to one another on a personal level.  Their overlapping dialogue, characteristic to Churchill’s work, reinforces the impression that the price to be paid for success as a woman is emotional isolation, as well as the rejection of qualities tied up in the female identity.

One regrettable choice is the casting of a Caucasian actress to play the Japanese Lady Nijo.  Frankly, the implication that a substantially “adequate” and ethnically appropriate actress could not be found to play this part is unacceptable. Hopefully this is not an oversight that will be repeated by the festival in future seasons.

The powerful opening scene is contrasted by the introduction of Angie (Julia Course), the juvenile 16 year old birth daughter of Marlene who has been raised by Marlene’s sister, Joyce (Tara Rosling) to allow Marlene to pursue her career.  The relationship between Angie and her much younger playmate, Kit (Tess Benger), provides yet another perspective on womanhood.  Benger and Course play rough in just the right way, perfectly capturing the capacity for cruelty that sits with girls on the brink of adulthood and struggle with the desire for, and fear of, autonomy.  Their rapidly roiling relationship is echoed by Rosling and Byrne in the stunning performance of a kitchen table conversation between sisters Marlene and Joyce.  With this exploration of a complicated and life-long relationship in just one scene, and a remarkable showcase of the range accessible to both actresses, I believe Top Girls achieved one of the most memorable moments of the Shaw season.

Dissecting the extensive possibilities of female relationships, and the pursuit of a wholly satisfying position for women in society, the production’s resonation with 21st century feminist ideals proves that Churchill’s play transcends its era.  This is a script for yesterday, today, and for the foreseeable future, but I am happy that the version I got to see is at the Shaw Festival.