Waiting for No One: DART Alumni Take to FringeTO with “Waiting for Alonzo” 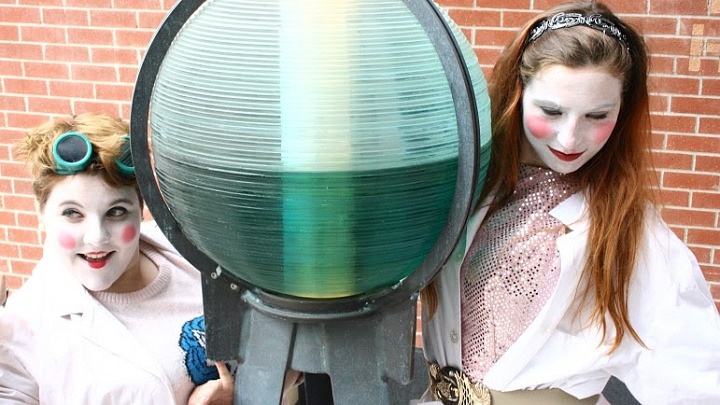 Three years ago, my friend and occasional director Keavy Lynch, artistic director at Empty Box Theatre Company, texted me saying she needed actors for a directing class assignment, and that she had “dibsed” me. That was my first encounter with the world of Waiting For Alonzo and my character, Bielke. It was a different beast back then: a five minute, semi-slapstick directorial project filled with tulle and teapots, in which I sashayed back and forth giggling and smeared fake blood across my own face. Many elements remain (the teapots and the fake blood, to name a few), but this resurrection of Waiting For Alonzo for the Toronto Fringe is something larger, glitzier, and more monumental than that directing class assignment three years ago: this Alonzo uses slapstick to slap the lipstick right off the viewer’s face and gets – literally – bloody doing so.

As an actor and a critic, I often find myself conflicted when it comes to reviewing the work of friends and colleagues. The way we have circumvented this problem in the past on DARTcritics is by sitting down for an interview with the creator in question and letting them speak for themselves.

I’ll confess, a rehearsal room with Keavy Lynch is so intense I found little time to sit down with her and chat about the piece, outside of getting notes on how to SPECIFICALLY attack myself with a hammer (you’ll have to see the show to get that one). Nevertheless, I hastily flung a couple questions at her, which she has miraculously been able to answer smack-dab in the middle of our Fringe run.

HAYLEY: Your title is a clear nod to Beckett’s Godot, and the master-servant dynamic between Zanita and Bielke is reminiscent of that of Endgame. Is there a conscious feminist intervention of these absurdist pieces in Alonzo?

KEAVY: I was so sick of seeing absurd/weird shows that I liked and wondering why there weren’t any women. I think the problem is that surreal shows tend to be more about abstract or universal concepts than individual character quirks, and there’s this construction that male = universal. This means that shows about “what it means to be human” are often just shows about white guys. Part of the show definitely came from wanting to challenge that.

HAYLEY: You could argue Alonzo is a piece of speculative theatre, similar to the post-apocalyptic sci-fi genre; what does this “not-too-distant-future” setting lend to the piece?

KEAVY: I‘ve never really thought much about the time of the play – it just felt inevitable to set it sometime in the near future.

HAYLEY: The play ends with a call to action, asking audience members to bring forward expired makeup and beauty products to be recycled by the cast. Can you talk a bit about why this is important to you?

KEAVY: I often feel so useless when I make feminist theatre or environmental theatre because the problems we’re facing are so huge, and it’s so easy for audiences to just walk out of the theatre, shake off the message and forget all about it. The makeup recycling gives the audience a small positive action they can make right away that hopefully breaks the tension of “I can’t fix this” and puts it into the context of “what can I do?”. It also helps to calm my own personal guilt for the environmental drain that putting on a production is.

HAYLEY: This is your second year in the Fringe – what have you learned on this second time around?

KEAVY: Every show I do is such a huge learning experience for me at this stage in my development, though I can’t really think of anything I’ve learned specific to Fringe. I will say that with this show I really focused on finding a team that works well together, and has fun, and is open to exploring in rehearsal as well as advertising at the Fringe club – there’s so much work involved in both staging a show and getting people out to see it, so having a great team that’s up for anything (like our team) is super important!

HAYLEY: What’s in store for Empty Box Theatre in the future?

KEAVY: I have a lot of projects I want to work on/am working on right now. I’m someone who’s constantly bored at the theatre so I’m always searching for the kinds of projects that interest me as an audience member. I’m working on some immersive and site specific stuff and I’m writing a few historical-ish shows at the moment, but I also really want to start a Toronto performance art group sort of like Improv Everywhere, but feminist. If anyone wants to get involved in this, get in touch!

It is important to me as an editor and a critic to keep this site as unbiased as any form of artistic criticism can possibly be. That being said, I wanted to share a few more thoughts on Waiting For Alonzo that can only come from the very biased position of being in the production. (I’ve numbered them so you’ll know when the bias ends).

Waiting For Alonzo is playing at the Theatre Passe Muraille Mainspace until July 11 as part of the Toronto Fringe.