Elevated Humour: “She Stoops To Conquer” Rises to the Occasion 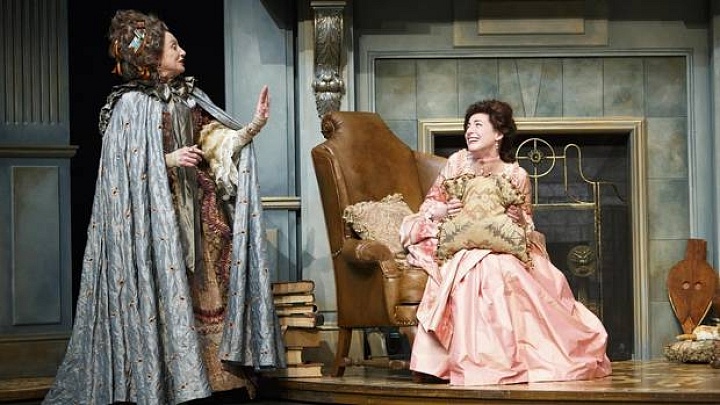 She Stoops to Conquer is a stellar success at the Stratford Festival. Opening on June 4, Oliver Goldsmith’s classic comedy is brought to life for contemporary audiences by director Martha Henry and her tremendously talented cast, who tell the story of genuine characters in an outrageous world.

Goldsmith’s comedy is set in a sophisticated pocket of countryside west of London, where Mr. Richard Hardcastle (Joesph Ziegler) and his wife Dororthy Hardcastle (Lucy Peacock) both try to maintain their sanity while dealing with the many eccentric personalities running wild on their estate. Mr. Hardcastle is trying to marry off his daughter Kate (Maev Beaty) to a London gentleman – Charles Marlow played by Brad Hodder – but runs into some complications when boisterous step-son Tony Lumpkin (Karack Osborn) twists the truth about the estate. Before the arranged meeting between Hardcastle and Marlow, Tony deceives young Marlow and acquaintance George Hastings (Tyrone Savage) into thinking that the Hardcastle’s estate is an inn, setting off a series of dramatic misunderstandings and miscommunications between Marlow and his soon to be father-in-law. A vivacious and witty ingénue similar to the likes of The Beaux’ Stratagem’s Dorinda, Kate Hardcastle strongly takes centre stage, changing her appearance in order to rid herself of her family status and win the heart of the reserved Marlow.

The servants of the Hardcastles – Diggory (André Morin), Alfred (Paul Rowe), and Roger (Gareth Potter) – are, hands down, the most entertaining part of the show. These loveable characters construct the unseen world of what is actually going behind the doors of the Hardcastle’s manor. From dropping Marlow’s luggage down the stairs to copying every mannerism of Mr. Hardcastle, the attempts of these three stooges to keep up with the antics of the more gentlemanly characters is hysterical.

The cast and artistic team of She Stoops To Conquer deserve high praise for this rollicking production. The Hardcastle’s estate works as a beautiful and versatile revolving set, designed by Douglas Paraschuk, and moves between various parlours in the mansion. It fills the proscenium stage of the Avon Theatre and creates an authentic atmosphere of the 18th century. The performers use the lies and mistakes of others to pursue their own personal motives, making for wickedly fascinating exchanges of power, and executing a fast-paced show that comments on the dichotomy between what we do in public versus what we hide behind closed doors.