A Shrewd Choice: The Shrew is Tamed but not Broken 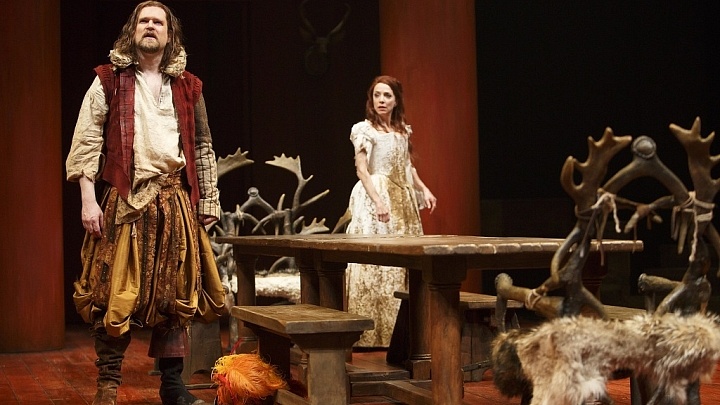 Shakespeare’s The Taming of the Shrew presents a delicate decision for directors of our time to make: either condone the inherent sexism and celebration of male-dominance in the text or condemn it. This season at Stratford’s Festival Theatre, director Chris Abraham has taken a third option; he has chosen to ignore it. While it may not be the most socially progressive choice, it was certainly a successful one. The focus of this production was instead placed squarely on the enormous possibility for both physical and linguistic humour and, performed by a stellar ensemble, not one punch line was missed.

The story follows the conniving Petruchio (Ben Carlson) as he attempts to woo the headstrong Katherina (Deborah Hay) who must be wed before her more pleasant-tempered and desirable sister, Bianca (Sarah Afful), can take a suitor. With mounting absurdity Petruchio confounds even the quick-witted Kate, whose transformation from demonic to demure culminates in a final speech promoting the subservience of women to their husbands.

The content of the play should feel demeaning to women, but so superior is the subtle layering of emotion and intent from Hay and Carlson that this is not the case. Hay’s delivery of Katherina’s final speech is so richly complex that a new interpretation of the text is teased out. Perhaps, while Shakespeare’s material is so often exalted for being rich with universal themes and “truisms”, Katherina and Petruchio’s story is not so universal. Perhaps this is a story about two very specific people whose unique courtship and marriage contain very specific rituals, which are not intended to be adopted or enforced by anyone else. Maybe we are being given the gift of a glance into a bedroom that, not unlike our own, only thrives when catering to the individuality of its occupants. It is a testament to the excellence of Shrew’s leads, and their ability to find this specificity of character and voice, that respect and appreciation were the qualities most present in what is often deemed an abusive and defeating relationship.

Performances from Tom Rooney (Tranio), Brian Tree (Grumio), Michael Spencer-Davis (Gremio), and the rest of the clown-like cast are more one-dimensional than Carlson and Hay, but no less charming. Under Abraham’s direction, they employ both classical Commedia dell’arte techniques and more contemporary comedy tropes to maximum effect. With very little distraction in the way of set and lighting (designed by Julie Fox and Kimberly Purtell respectively), the strength of the actors is showcased and even more impressive.

Abraham’s production of Taming of the Shrew is not seeking to impose an opinion. It is not passing judgment on Shakespeare’s text, nor does it attempt in any large way to adapt it for modern audiences. Instead, it offers the fullest possible interpretation of one couple’s relationship and reminds us that to be tamed is not the same as to be broken.

Tags: Chris Abraham•DARTCritics•Elizabeth Amos•Shakespeare•Stratford Festival•Taming of the Shrew
OlderSailor’s Delight: “Lady From The Sea” is Anchored in the Here and Now
NewerElevated Humour: “She Stoops To Conquer” Rises to the Occasion