Sailor’s Delight: “Lady From The Sea” is Anchored in the Here and Now 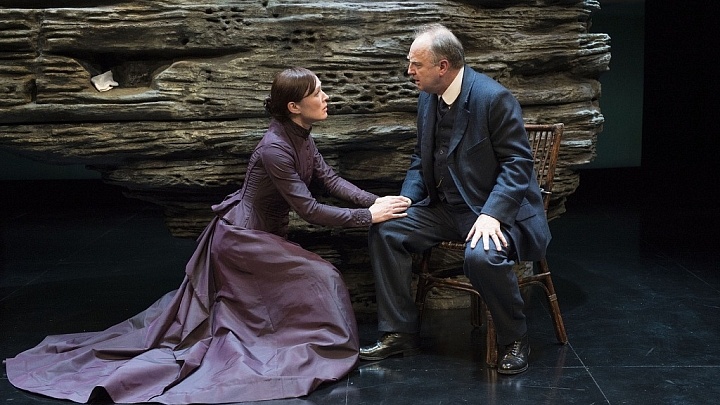 Lady from The Sea by Henrik Ibsen plays at the Shaw Festival this season, reminding audiences of a type of love that is all consuming, just like the open ocean. As the titular character, Moya O’Connell captures the very essence of that once familiar feeling of lovers gone by.

Jenny Hval and Susanna’s “I Have Walked This Body” fills the Court House Theatre with elemental, almost hymn-like sounds, transporting audience members to the howling fjords of Norway. Camellia Koo’s set design is simple yet effective: a cliff sits centre stage, an anchor between the fjord and the isolated mountain village where most of the drama unfolds.

The ensemble shares a symbiotic energy that powers the dramatic tension between their intricate relationships. Ellida Wangel’s (Moya O’Connell) heart is in a constant state of flux, torn between her current marriage with Dr. Wangel (Ric Reid) and her mysterious “illegitimate” marriage to The Stranger (Mark Uhre) years earlier. Ellida longs to break free from her current marital bonds so that she can face her past, not just as a woman but as a free individual.

Parallel relationships develop alongside Ellida’s dilemma: both endearing artist Hans Lyngstrand (Kyle Blair) and Professor Arnholm (Andrew Bunker) pursue the Wangel daughters – played by Jacqueline Thair and Darcy Gerhart. Lyngstrand and Arnholm attempt to use their respective professions to persuade the stepdaughters to marry them – or at least “think” of them romantically. Ibsen’s keen assessment of marriage traditions – translated for this production by Erin Shields – is called into question by elder daughter Bolette (Thair), who longs to leave her hometown and sees marriage as her final option.

Director Meg Roe conducts a powerful current through this production, pulling and pushing the envelope of what it means to be in a “lawfully” bound relationship. The dramaturgical work by Joanna Flack, partnered with Shields’ translation, maintains the authenticity of the 18th century – with references to Darwin’s works on evolutionary theory – while at the same time providing inklings of contemporary feminism: namely, women achieving their own ambitions without the financial stability of a man. The text allows the women in the play to subtly subvert the traditional patriarchal ideas of the man being the breadwinner and central figure within a family; defiant younger sister Hilde (Gerhart) in particular shows up Lyngstrand in a hilarious and satisfying debate of art and love.

The climatic showdown at the end of the play is too short, I’m afraid. The first two thirds of the show build up with such gravitas, but the reunion between Ellida and the Stranger, as well as her final decision, leave little impact. We gain powerful insights throughout the play into The Stranger’s unconditional love for Ellida, as well as his almost-magical power over her, but when he arrives on stage it does not meet that same level of intensity. Uhre’s performance is not compelling enough to convince an audience that he has that much of a hold over Ellida; O’Connell does all the work in this encounter, but without the same amount of effort from Uhre these pivotal moments become sadly predictable for such an otherwise powerful production.

Nevertheless, Lady From The Sea provides a satisfying estuary threshold between land and sea, between past and present, and between love and freedom. Freshly translated, Ibsen’s work makes astute commentary on the marriage institution, which still resonates in the here and now. Whether we are in 18th century Norway or 21st century Canada, we continue to question the complex relationship between freedom and love as Lady From the Sea does so elegantly.

Tags: Alex Jackson•DARTcrititcs•henrik ibsen•lady from the sea•Niagara Theatre•Shaw Festival
OlderFar From Stardom: “Peter and the Starcatcher” Misses Its Mark
NewerA Shrewd Choice: The Shrew is Tamed but not Broken