A Vivid Exclamation: Zuppa Theatre’s Pop-Up Love Party is a Love Story for Everyone 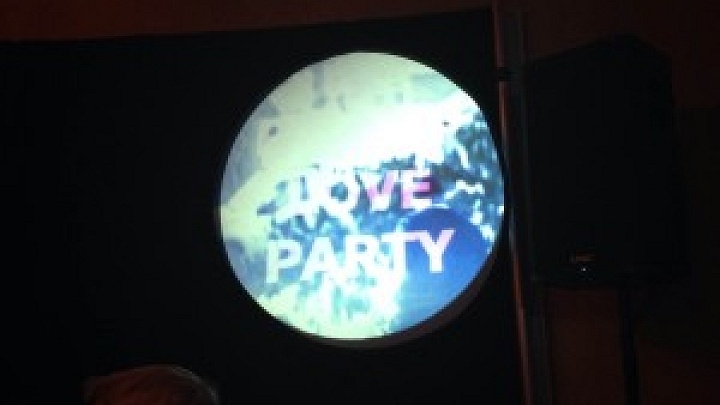 On a frigid April night, La Scala Ristorante burned hot with talk of love: Zuppa Theatre Co.’s Pop Up Love Party is the kind of ‘dinner theatre’ that makes each mouthful feel like a meal, and each uttered thought feel like a magic spell. Our four critics saw the show on Thursday night. Here are their thoughts:

Nicholas Leno writes: Loves comes in all shapes, sizes, and chains. Zuppa Theatre’s Pop Up Love Party is an inclusive, elusive, and adventive discussion of the philosophical concept of love. Based on Plato’s Symposium, the production pits three actors against each other in a battle of ethics, morals, and logic to see who can best describe the thing we all know as love. Discovering the meaning behind such a romanticized word isn’t easy, so accompanying Zuppa theatre’s brilliant performers are the delicious inventions of chef Daniel Burns. Seven different snacks transport the production’s words inside your mouth for a tasty experience that brings a whole new meaning to the term food for thought.

Elizabeth Amos writes: Different from any other theatrical event I have had to date, Zuppa’s Pop Up Love Party took the already sensory experience of theatre of sights and sounds three steps further with taste, touch, and smell. Food and drink were incorporated into the evening, not as an accessory, but as an extension of performance to further engaged guests already involved in the central conversation on love. Thoughtful and thought-provoking, Zuppa Theatre Co. was able to balance hilarity and heartbreak to breathe new life into Plato’s Symposium and make it accessible for modern audiences. Between the intimacy of the space, the audience interaction, and the casual comfortability of the actors, the show felt completely fresh and original. While the piece flowed smoothly, it didn’t feel rehearsed or performed and it is clear that each run of the show is a unique experience. What a great way to kick off the weekend!

Hayley Malouin writes: “A broken heart is an illusion. The heart doesn’t break; it bends.” What’s a pop-up love party? A vivid, all encompassing feast of a show – literally. Zuppa Theatre’s Pop-Up Love Party is the definition of philosophical theatre, in the sense that its point of departure comes from within Plato’s Symposium, a dense text in which a drinking party make dissenting toasts to the concept of Love.

Accompanying these passionate, energetic, and oftentimes hilarious toasts is the strangest assortment of foods I’ve ever eaten; the delicate smoked salmon and pop rocks sandwich comes to mind. But Michelin star-rated chef Daniel Burns has tailored each course specifically for each toast – as the ensemble says, “Each snack literally food for thought”.

I did find it odd that a piece paying tribute to Plato’s alcohol-fuelled philosophical text didn’t have an open bar (especially since the audience was asked to raise a glass so frequently). My advice for the show: bring cash – you’ll want to drink along.

Whether you’re a theatre enthusiast, a fan of philosophy, or just a determined drinker – you’ll dig this show.

Alex Jackson writes: The night is young, so fill your glass and your stomachs, and cheers to love, as Zuppa Theatre Company’s Pop-Up Love Party takes audiences on a sensual adventure in search of not what love does, but what love is.

Hosted at La Scala Ristorante in the heart of downtown St. Catharines, this queer positive performance is supported by a 7-course meal created by contemporary Chef Daniel Burns, served alongside the updated dramatized version of Plato’s Symposium: a philosophical drinking party on the nature of love. Actor Stewart Legere encourages safe drinking to the audience while the night takes off at the speed of love with Susan Leblanc’s kegel exercises and Ben Stone’s conspiracy theories of the aliens that split us all from our “other half”.

The most beautiful part of this performance is the integration of queer love into this ancient Greek conversation, occurring over 2000 years ago. It’s empowering to see queer-relationships being showcased at the same philosophical value as heterosexual relationships, especially being incorporated in a piece of literature that was written thousands of years before ‘queer’ took on its current connotations.

Being a lover of love and of Plato’s works, I was disappointed not to hear the usage of damion, a Greek term that define one’s inner potential that one can never understand or reach. With all the talk of contemporary love, I yearned for the old philosophical terms Plato and Socrates spoke of and stood by; the terms that declare love starts off with loving oneself, not an egotistical love of actuality, but the potentiality of someone that is hidden underneath the skin and invisible to the eye. One can never see the gold underneath their skin, but that’s the journey that everyone must go through to gain self-love and in-order to love another.

Zuppa Theatre should be congratulated for their inspired attempt to find the contemporary meaning of love through the ancient words of Plato and Socrates. I can only hope that more productions like this will be created, trying to solve the mystery of Eros and their path through the universe.