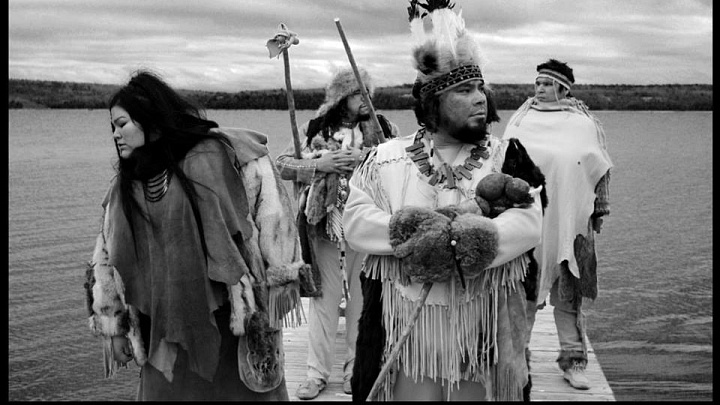 Sunday night on the hillside just behind Rodman Hall, seated around a fire boiling cedar tea, Manitoulin Island’s Debajehmujig Theatre Group will present The Global Savages – an experience that blurs the lines between performance and storytelling; myth and history; theatre and ceremony. What is sure to be this intimate and captivating event actually started five days ago, when the members of Debajehmujig arrived to collect local histories for their performance. Their final product will be an amalgamation of stories from the Anishinaabeg people and locals alike. Exploring the Niagara community, and bringing an Aboriginal perspective to our local history, The Global Savages are a group you don’t want to miss.

On Thursday I met with artistic director Joe Osawabine to discuss the unique nature of Debajehmujig’s artistic work and process. After starting with the company at age twelve, Osawabine has spent his time as a theatre practitioner building creative methods and material that honour the Anishinaabeg people’s world view.

The devising process coined by Osawabine and his colleagues – the Four Directions Creation Process – is essentially holistic in nature, and stems from the Anishinaabeg foundation teachings. “It recognizes that we create with our entire selves: our emotional, our intellectual, our spiritual, and our physical selves” Osawabine explains. “You bring your whole self to the creation process and you don’t omit any part of those.” For actors and creators like me, who have been taught to check their baggage at the door, this attitude is new and refreshing. Osawabine chuckles, “It can’t work like that, obviously you can’t separate yourself like that. So within the process that we’ve developed you bring that in and use it as a resource for what’s happening in creation today. You let that affect what the art is for the day.”

But Debajehmuhjig was not always so well established in their mandate and philosophy. For many years they spent a considerable amount of time trying to make it in Toronto, never feeling fully satisfied that they were on the right track. “We were always trying to fit into the mainstream model of what theatre was,” Osawabine says. It was only when they turned to Northern Ontario and focused their creative endeavours closer to home that Debajehmujig started to take the shape it is now. “From that point we kind of saw ourselves as bridge-builders between the North and the South. We’re just in the key place to be able to do that.”

This is where their current project, The Global Savages, comes into play. Their changing in focus from South to North was also driven by the company learning the oral history of North America – or Turtle Island – from the Aboriginal perspective. With this 18 000 year old history as a wealth of resource, The Global Savages began sharing history and culture with larger communities. As Osawabine says, “Okay, we know the teachings, we know that they’re important, now we need to figure out how to incorporate them into what we do on a daily basis.” Finding this incorporation has become a lifelong journey.

What makes Debajehmuhjig so fascinating is their intersection between the traditional and contemporary; native and non-native communities. “It’s about education and sharing, really, and building the bridge that way between the two cultures” says Osawabine. “Through sharing our stories and finding where they intersect.”

So what can be expected from The Global Savages this Sunday? “From my understanding one of the tasks here in St. Catharines is to build a relationship with the Aboriginal community in the area” Osawabine says. Other than this small insight, he is purposefully mysterious. “We have a hard time defining it, it’s not really a theatre show” he says. But, if you’re like me and love a good story, then Debajehmujig’s creative process and unique position as cultural bridge-builder should be enough incentive to attend Rodman Hall Sunday evening – “theatre show” or not. Come along to the fire, and enjoy a cup of cedar tea and a story or two.