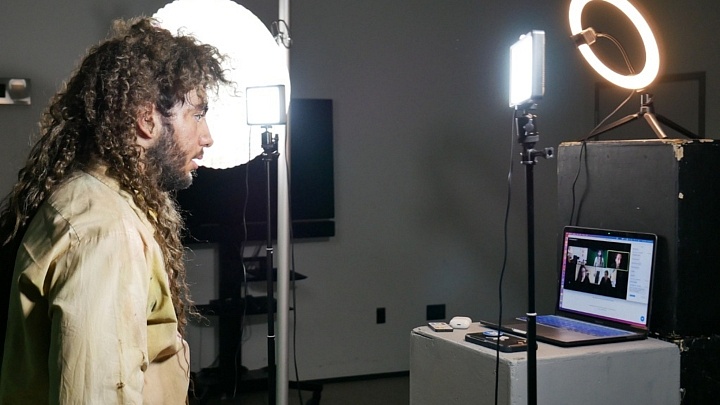 What’s the best way to describe Sheila Callaghan’s play Fever/Dream? Simply put by actor Joanna Tran: “like a fever dream.” Director Gyllian Raby expands on this, describing the show as a combination of “humour and the surreal, in a cocktail of magic realism.” Staging this buoyant, complex play online in the midst of the ongoing Covid-19 pandemic has come with its share of complications and rewards for Brock’s Department of Dramatic Arts (DART) these past months. An additional, unexpected tragic event has also become an indelible part of this production experience: the passing of dawn e crysler, a member of DART staff and a key player in the Fever/Dream production process, just a few weeks before the show was completed.

The show follows Segis (Luca D’Amico, pictured above; photo by David Vivian), who has been locked in a basement since being born on Black Monday during the 1987 stock market crash. He’s been imprisoned by his father, Bill Basil (Matt Martin), whose company suffered as a result of the crash, and who can’t help but associate his son’s birth with the loss. Assistant stage manager Alyssa Ruddock describes it as the “story of capitalism meets Spanish drama.” And it’s Spanish drama because Fever/Dreamis based on the Spanish play Life is a Dream, by Pedro Calderón de la Barca. What’s even more enticing – the timeline of the show has been transferred to present day, bringing current socio-political issues into the show’s dynamic, and embracing the Zoom platform on which it is being performed. 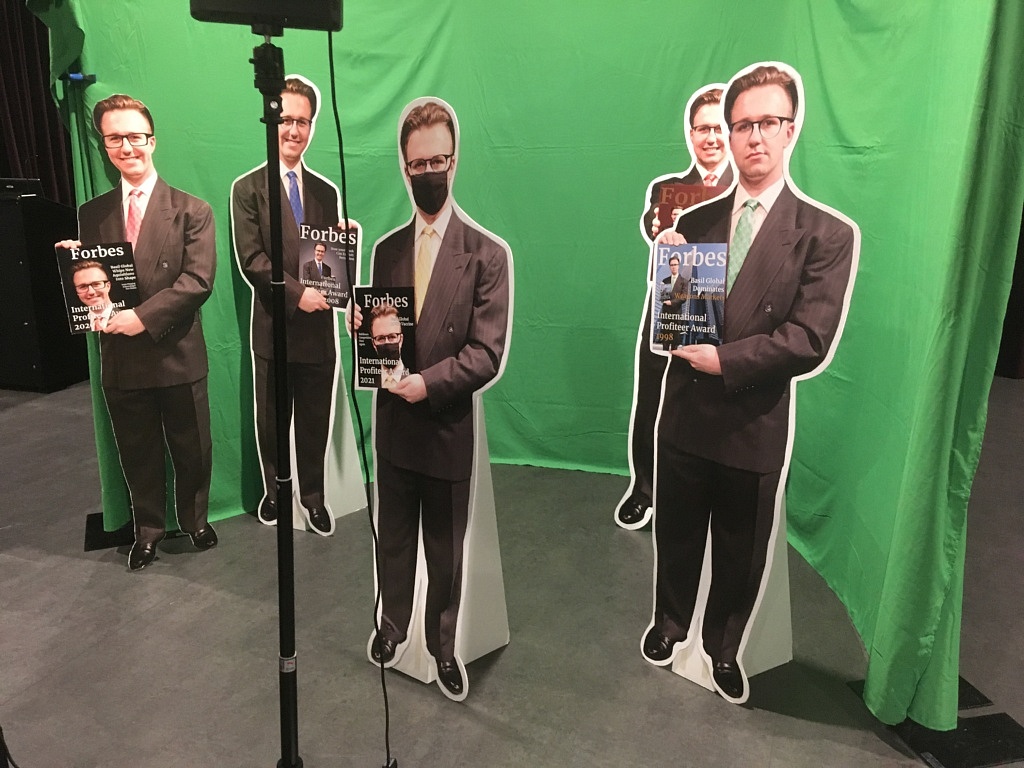 Matt Martin as Bill Basil, in a series of life-sized photographs used in the recording of Fever/Dream. Photo by David Vivian

The show – Brock University’s first pre-recorded Mainstage – will stream online in performances from April 7-11. A process that began over a year ago will take the virtual stage after months of re-routing due to the fluctuations of the pandemic. The initial 2020 lockdown called for the first set of changes in Fever/Dream’s artistic and production agenda. Having coped with that disruption, more was in store, as the 2021 January lockdown left studio spaces at Brock’s Marilyn I. Walker School “severely restricted,” says Raby, and rehearsals were “postponed two weeks to recalibrate and plan a third approach.” A plan ensued that enlisted costume designer Roberta Doylend to make a list of props and costumes to be delivered to actors at their homes; and the trio of set designer David Vivian, lighting designer Chris Malkowski, and production manager Brian Cumberland acquiring the items, with Cumberland making the drop-offs. 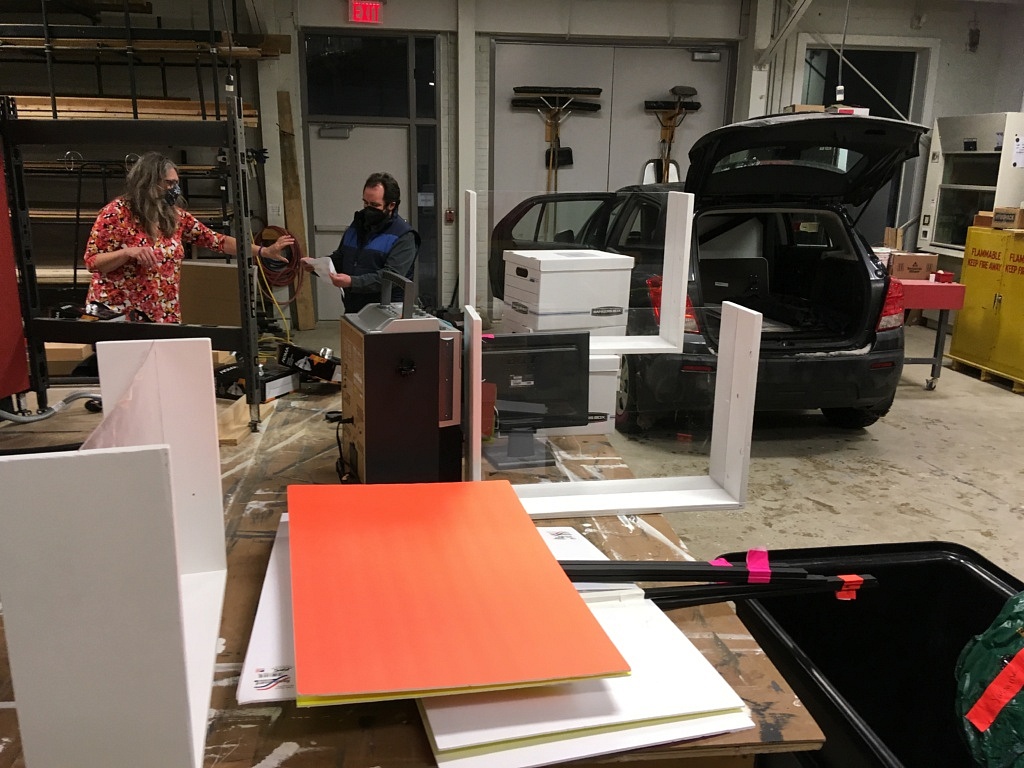 Costume designer Roberta Doylend and production manager Brian Cumberland working on the delivery of costumes and props to students at their homes. Photo by David Vivian.

However challenging the process had been so far, nothing prepared the company and the whole DART community for the passing of crysler, who was the theatre technician for the Marilyn I. Walker School and worked closely on Fever/Dream. During the Mainstage’s rehearsals and filming, crysler was inside the Walker building, setting up for the actors who had been granted access to individual studio spaces. Stage manager Diego Blanco recalls her “taking on everyone’s role; she was a stage manager, and assistant stage manager, and lighting technician, [and] sound technician.” crysler was truly an integral member of the Fever/Dream team, “the backbone of the show,” according to Ruddock. Regrouping to continue production work while beginning to work through this loss became a difficult part of the Fever/Dream journey. 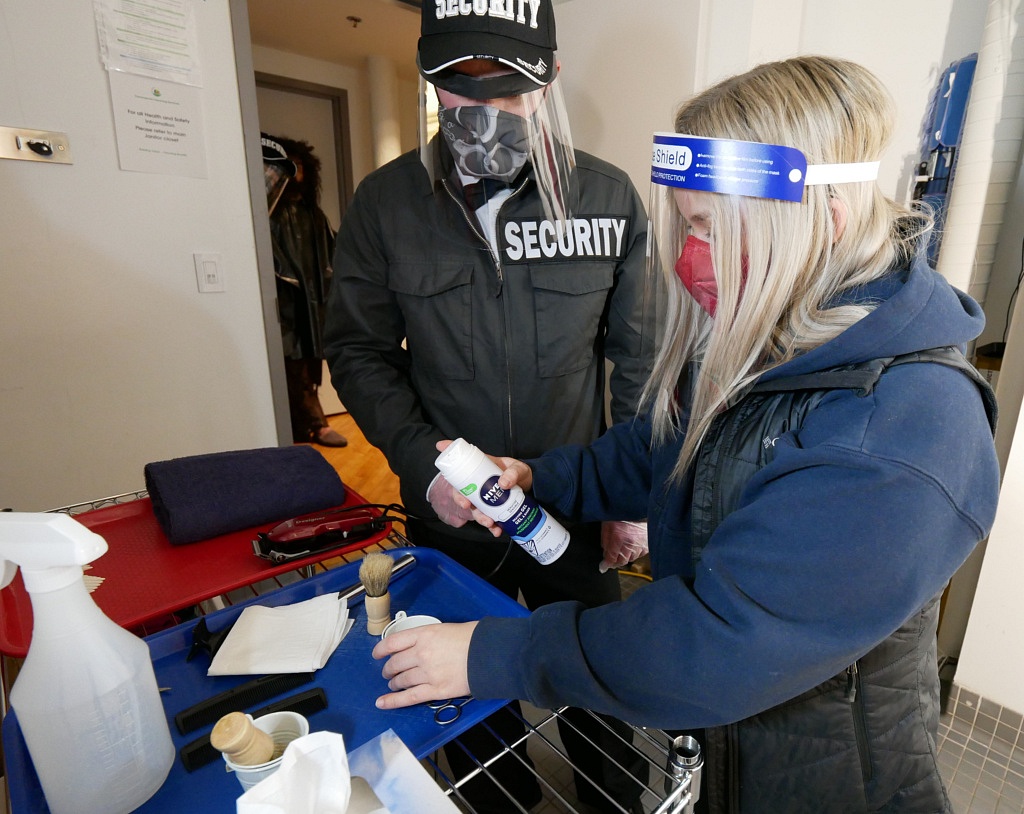 With their largest task gone, Blanco and Ruddock spent their time focussed on procuring what Blanco refers to as “soft skills,” meaning things like reading the atmosphere of a Zoom call or noting the mood of an actor during rehearsal. The fatigue of putting energy into a screen for long hours can tend to take a toll, and using their soft skills, stage management offered support and open communication “for actors if they didn’t feel like themselves that day, or they didn’t feel…like they can be present on Zoom due to personal or medical reasons,” Ruddock explains.

Blanco worked to foster a positive environment as, from his experience as an actor in last term’s Scenes from an Execution, he understands the challenges of acting through a screen. He notes the largest difference between actor and stage manager (in person or on Zoom) is when acting, “there’s a lot of questions that you have but you don’t have to solve them… when you’re a stage manager and you’re part of the production, you are fixing all those questions.” And there are a lot of questions: I’ll take the leap in saying no theatre production ever goes without queries from every member of the cast and creative team. Malleability for Blanco and Ruddock became a top priority; the duo truly had to embody what Ruddock calls the stage managers’ motto: “be prepared for anything.” 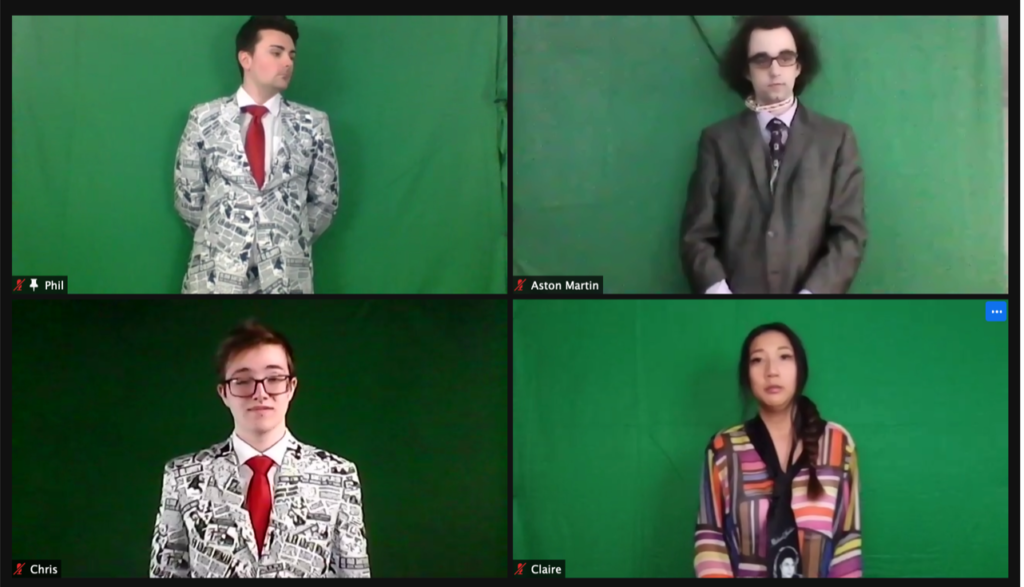 Clockwise from top left: Jonah Pace, Peter Herbert, Joanna Tran, and Lucas Irving in Fever/Dream. The image is a screenshot from a Zoom recording session.

The creative team weren’t the only ones requiring adaptability. Acting in isolation means that actors become their own stagehands. In Fever/Dream, each actor achieved their own lighting looks and camera angles, specifically experimenting with “another actor’s perspective on things… how they would see the play,” says Tran, who acts in the role of Claire, a character described by Raby as a “quirky” and “un-relatable wild card.” Playing this role, Tran says being on camera allowed her “to make more discoveries as an actor… things about my character that I’d never thought about before.” Shifting anyone’s environment can inspire new thoughts and, although theatre constantly encourages growth, Zoom theatre is especially a learning experience, and in my view, a great one at that.

After weeks of rehearsal and finally getting into the filming process, there were more things to get used to. “As a stage actor, I like to feed off the audience,” says Tran. “Now it’s one take or two takes and then you’re done.” Learning to find internal motivation for character depth becomes fundamental for acting on Zoom. A particular technique is looking off-screen so that characters can be edited together and seem to be looking at one another: “I’m looking to [an actor] on my right but I’m not. I’m not talking to anyone at all,” Tran says. She ultimately explains this pushed her creative skills further and it became “thrilling” as she continued to adapt and “[connect] through a screen.”

The adjustments made by every single member of this company showcase a divine persistence when faced with adversity. In the final days before Fever/Dream’s opening night, “memories of dawn laughing light the way,” says Raby. The company has dedicated Fever/Dream to dawn e crysler, an irreplaceable figure in the DART community, and it is hoped the show will be a fitting tribute to her. 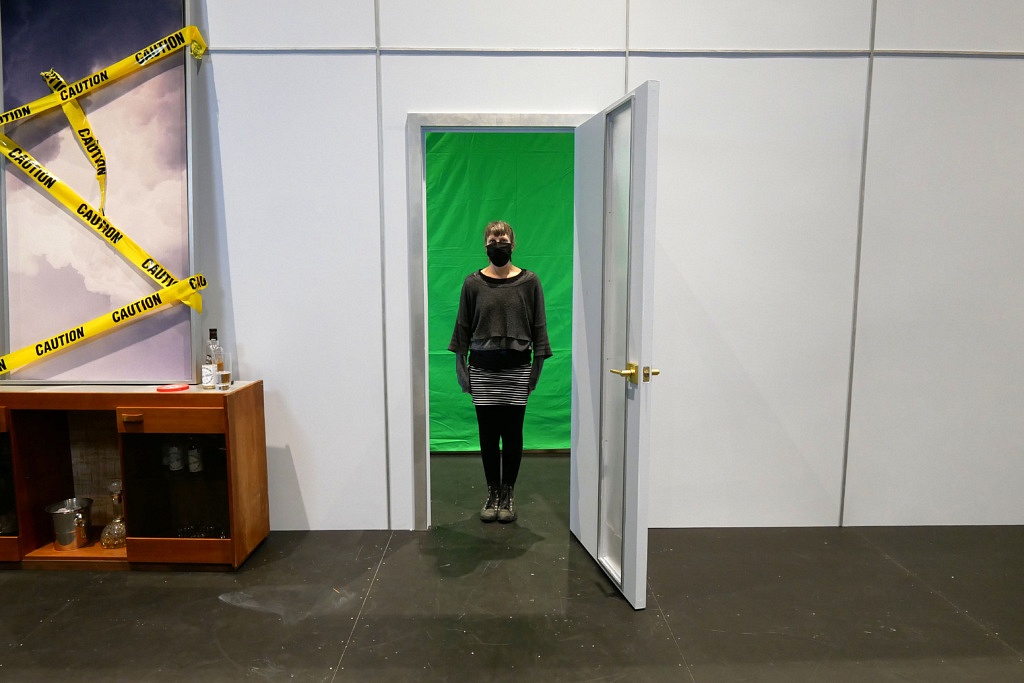