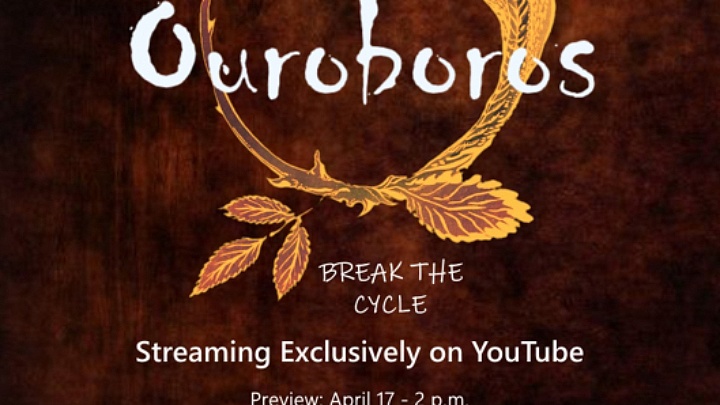 The Brock Dramatic Arts department’s fourth year students have been working hard on their final production of this academic year. Ouroboros is a piece of pre-recorded devised theatre that will be streamed April 17-18, with a matinee and an evening show on each day. Tickets are free (here’s a link) with a recommended donation to the Black Health Alliance. The production is one of two performance outcomes of DART 4F56, a course in which students form a theatre company and take on all aspects of production. This year’s 4F56 students, calling themselves Sandbox Theatre, staged Jordan Tannahil’s Concord Floral with heart and sincerity online in the Fall, and now the students have taken on the job of creating the material they will perform themselves, using the process of devising. This article outlines some of the thinking behind and background about the production, and a video included at the bottom of the article allows you to hear ensemble members speaking about and reflecting on the process.

Diego Blanco, one of the members of the Sandbox ensemble, explains that devised theatre is “starting a piece of theatre from scratch, and then using any resources that you can to inspire you to start creating something.” Mia Hammond builds on Blanco’s point by saying that “devised theatre also opens up opportunities to collaborate artistically, in really valuable and fulfilling ways that you don’t necessarily get with scripted shows.” The ensemble of Ouroboros gets to wear many different hats in the production, and it sounds like 4F56 put a lot of love into this show.

It was the video editor, Peter Herbert, who conceptualized the production’s title. An ouroboros is a ciruclar symbol depicting a snake swallowing its own tail, representing infinity. He wanted the title to highlight the cyclical nature of life, a theme that recurs in many of the scenes. Hammond highlights the specific perspective the ensemble’s work takes. She says “there’s something about the snake eating its own tail that shows that this cycle is self-damaging.” The main area where Herbert sees this self-perpetuating cycle is in social justice, where despite calls to action, the members of this ensemble feel nothing seems to change. He says he wants the audience to understand that “if anything, there’s a sense that the world is a beautiful place and worth fighting for” and that “the future is worth the fight,” after seeing this play.

In comparison to the previous term’s production, head of wardrobe Avery Delaney says, “If Concord Floral was like a peek into, you know, our bedrooms then Ouroboros is like a peek into our souls.” All of the pieces in the final production were based on assignments that individuals or small groups put together and then shared with the ensemble. Delaney says they appreciated how the ensemble could let their voices be heard in this show and that “all of us put in a little piece of our heart into this show, something that means a lot to us.”

Heidi Nickel is excited about the innovation of the production as a way for artists to express themselves: “It’s giving us the chance to show the audience aspects of us and more of our creativity as artists, and what we’re capable of creating.”

Sid Malcom is the director of this production. I ask her how she found herself in this role and she explains, “it really came out of my past as a technical director, and the fact that this is a…virtual show.” She was one of the assistant technical directors (ATDs) of the DART Fall 2020 Mainstage production Scenes from an Execution as well as being the departmental ATD in the Winter term last year. She explains how those skills applied to this project. “Each piece has its own director within the creation process,” says Malcolm, and her job was “to have somebody to give an outside eye.” This allowed her to see the piece as a whole when working on smaller components, and to give creative and technical notes to make all the pieces fit together.

She says the biggest challenge she faced was critiquing her peers’ work. The most important thing was “finding that balance between not stepping on toes but also doing what’s best for the end result.” Malcolm says that “this show’s probably not anything you’re expecting.” She says it asks hard questions and invites the audience to think about things that are usually dismissed as being too troubling to linger on.

The ensemble has come together to produce an original performance, which Herbert describes as an experimental art piece. Multiple members of the ensemble, which also includes James Dengate, Holly Hebert, Grace Martins, Nathan Rossi, and Jackson Wagner, commented on how it challenged them to create something outside of their comfort zone. It is really a combination of all of their skills and a last hurrah for the graduating class. After four years of working on a variety of productions, they get to put on a final show which brings together a variety of the theatrical techniques they have learned. Ouroboros may mark the end of their time at Brock, but it is the beginning of a new phase of their lives as artists. As one thing ends, another begins.

Here is a video made by Alex Sykes, which opens up the Ouroboros process even more: