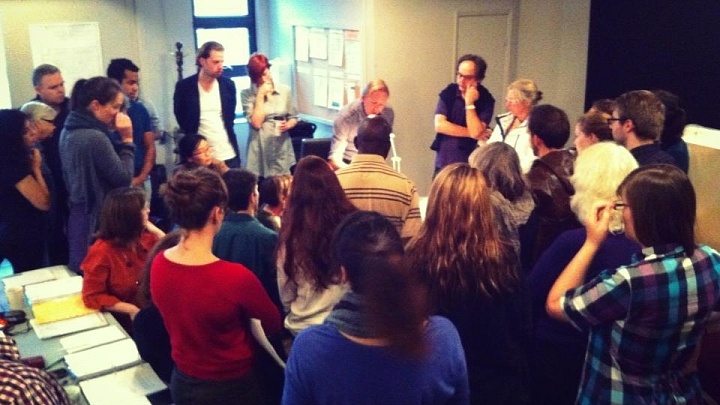 Embedded criticism involves an arts writer following a creative process closely and generating writing about the process that reflects this insider knowledge. The term was coined by London (UK)-based theatre critic and blogger Andrew Haydon in April 2012 and expanded on by the New York City-based arts writer and advocate Andy Horwitz in October of that year. A number of arts writers and organizations, particularly in London, UK, have been experimenting with the practice since.

In academic year 2013-14, groups of students in Brock’s DART 3P95/96 course, Studies in Praxis 1 & 2: Theatre Criticism, have been embedded in seven creative processes with companies in the Niagara region and Toronto. They have blogged about these experiences at dartcritics.com. The colloquium The Changing Face of Theatre Criticism in the Digital Age, held at Brock on 21-22 February, included a panel discussion on embedded criticism.

Following on from these experiences, a number of the DART theatre critics generated this document, articulating their ideas and questions about embedding, in the interest of improving and enhancing the experience for critics and artists/companies alike in the future. A new group of DART theatre criticism students will undertake embeddings in the academic year 2014-15.

The students expressed overwhelmingly positive responses to the experience of having been embedded. When asked what was cool about it, here were some of their responses:

— To see something from the beginning stages; to see how a director works with actors.

— To be behind the scenes and meet professionals.

— I love not being a regular audience member. Being an insider felt special; I felt privileged.

— It was a great learning experience as an actor. And I’m representing myself, not just Brock. It could be a networking opportunity.

— It felt like it does when we’re putting on a show. Everyone really cares; there was a buzz of uncertainty.

The current group is conflicted as to the job title “embedded critic.” Some find the word “critic” confusing as it confirms, to them, that the person in question will pass judgment on what they see — but whether or not embedders pass judgment is a contested issue. The alternative titles “embedded reporter” and “embedded academic” were suggested.

Here are the questions they raised about the practice, and some of their responses.

What is the relationship between the company and the embedder, and how is it established?

— Jackie Maxwell asked us to clarify what our role was when we went to see her at the beginning of our embedding in London Road. We said that it was an opportunity to make an informed critical response to a show by being a fly on the wall and seeing why and how decisions are made. Her response was that she wished more critics put in that effort before they wrote their reviews. The difference is though we are not evaluating how good the show was, but more asking if it achieved what it set out to do, and asking what kind of work it’s doing. I feel as though traditional critics write for the masses and embedded ones write for theatre junkies who wish to know more.

How do you ensure the integrity of the embedded experience?

— Clearly outline both parties’ roles from the beginning. You’ll run into problems if you are there in a critical function and the company thinks you’re doing PR. Also I wouldn’t engage socially until after the show is finished, to maintain the credibility of your response.

Who benefits from an embedded experience?

— Theatre companies: it’s important to have an outsider come in and comment on how you work; people tend to stick to their own ways and lose self-awareness. An embedded critic can bring up points the company never considered.

Critic: It’s a job! Yay! Also this will make them more informed and thoughtful as critics of other productions; they will know not to judge things at face-value.

Audience: They get a behind-the-scenes inside scoop! Some audiences want to know how the magic happened, what the inspirations were. I think it also helps people actively engage in the show as opposed to just watching it and leaving.

— I believe that both the audience and the theatre company have the potential to benefit. The company because it gets its name into the press in hopefully, a positive light. The audience becomes able to understand what is it like to put on a production. They will be less likely to ask the actors… “How do you remember all those lines?”

What is the point of an embedded experience?

— To create critical discussions and to make the public aware of the kinds of work that artists are doing in society, the benefits and consequences.

— To have a person who is able to be a “fly on the wall” in a creative process, sharing this information with the public to 1) increase publicity and 2) justify decisions and clarify themes for the audience.

— To provide a unique experience for the embedder.

Should (could) an embedded critic write a review after the embedding experience?

— I think so because it gives the embedded critic a purpose, and a reason to undertake the work. It can allow for a more critical analysis of the experience and the outcome of the show.

— I think in a perfect world, everyone would be able to handle the criticism of their work; however, people are defensive when they get a bad review from traditional critics, and I think having someone in their intimate space, watching their process, and then commenting on it and possibly disapproving would not work out very well.

I think a critical response to the content and form is important, but not necessarily one that comments on the actors’ abilities.

— I strongly believe this isn’t the point of an embedded experience. I think it compromises judgment if the person is embedded in a show. I think there is a difference between embedding and reviewing.

— This is a tricky question. I would like to believe that it would be possible for the embedder to write a final review. However, the review could come across as biased, especially if the embedder has a good relationship with the production team and/or if they are getting paid a decent amount and would like to maintain a relationship.

— I believe that the jobs of reviewer and embedder are different, and that embedders should not review the show in which they embed. I do feel however that embedded reports should be available to critics before they view the production, as this might help them respond to the piece they see.

— I don’t think the embedder needs to review the show. I think a reflection on their experience and comments on how some decisions affected the outcome would be nice and reasonable. Even responding to other criticism could develop a fair “critique”.

What is the difference between dramaturgy and an embedded experience?

— A dramaturg’s role is to work with the director and provide information for the cast on the show in terms of history and so forth. The embedded critic’s job is to respond to the production critically as opposed to contribute to the creation process. They offer a critical response to the theatre company’s creative work.

— The difference I can see is that the embedder is not a part of the production team or the company. They write articles from the outsider’s experience, while the Dramaturg works for the company.

— The embedder should not be opinionated and definitely should not be giving references or suggestions to the company/production.

— The embedded reporter should be an audience/dramaturg hybrid…. They may take note of areas that the dramaturg handles, but they should focus more on what the audience would be interested in reading.

Where is the line drawn between doing PR and being an embedded critic?

— As an embedded critic you are responding to work being done, raising questions etc. As a PR person you are only putting out the good news to the public. In my experience of embedding we reported on the challenges a show was having, and the director’s concerns. I don’t think a PR person would report on that.

Is the job of the embedder to represent the audience?

— I don’t believe that the job of the embedder is to represent the audience, because they witness decisions being made, and other things that the audience does not get to see.

— I believe the embedder represents the curiosity in the audience.

— I think the embedder represents the audience as a teacher would represent a class.

— I don’t think the embedder represents the audience, but their responsibility is to collect information for them and answer questions they might have about the show. They give the audience an idea of what the show is going to be.

— We are not there to judge the show, moreso to respond to it. I think the embedder doesn’t represent the audience, as they are privy to more information than audience members would have, but I think they are a liaison between the art and readers, to bring more understanding and raise questions.

Should an embedded critic’s research and perspectives be posted before the production, or after?

— I think we should post our information before the show, because it will help people go in with a more understanding and empathetic mindset, conscious of decisions made and the fact that productions involve a ton of research, and back-and-forth decision-making.

— I think the information should be posted after the show in order to not give away any spoilers and to avoid doing PR.

— I believe our research and perspectives should be posted after the show. Theatre should have an element of mystery, always to keep the audience on their toes. In exposing our research, we will be spoiling what the artistic team worked towards in the reception of their show. They have worked hard to create deeper meaning; who are we to step in front of that capability?

— I think the information could be posted during the process of the show (without spoilers of course) and then any information that may include spoilers or additional information collected after the whole process should be held off until the show is over.