Getting our Lepage fix 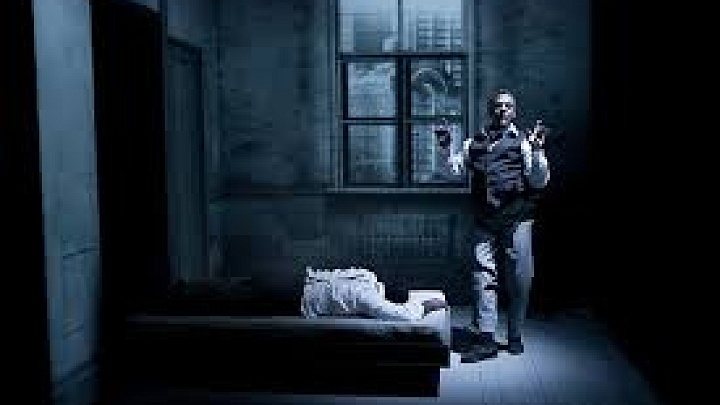 3 December 2013: The DARTcritics attended a matinee, on Sunday 25th October, of Robert Lepage and Ex Machina’s production of Needles and Opium at Canadian Stage in Toronto. Here is a selection of their critical responses:

Cassandra Moerman writes: “Please turn off your cellphones, even if you are expecting a call from your drug dealer. This performance is all the fix you’ll need.” These words echo through the dimly lit Bluma Appel Theatre right before Canadian Stage’s production of Needles and Opium by Robert Lepage begins. There is a ripple of laughter in the audience, but as with every good joke, there is truth behind it.

A Québécois actor, Robert, played by the extremely talented Marc Labrèche, is in Paris (“yes, Paris, France”) to record a voiceover for a documentary on jazz trumpet player, Miles Davis. However, he just experienced a difficult break-up, and as Robert narrates the story of Davis’s love affair, he chokes on his words, feeling suffocated by his feelings. The audience follows him as he tries to find a way through his hardships.

Wellesley Robertson III takes on the difficult, non-speaking role role of  Davis with grace and developed talent, through his movement and aerial acrobatics. Visually stimulating scenes transport the audience into Davis’ world as he falls in love with Juliette Gréco. Sadly, Davis is concerned about the racial prejudice that awaits them in New York, so he leaves her, subsequently falls into depression, and becomes addicted to heroin.

These two stories are seamlessly interwoven with via Labrèche’s other role as Jean Cocteau. His monologues forge a link between the two main characters’ situations. All three stories complement each other brilliantly, fitting together like puzzle pieces. They lend the audience different perspectives, allowing a connection to the action on stage.

The skills of Labrèche and Robertson are not the only things  to be  admired. Carl Fillion (set designer), Bruno Matte (lighting designer), and Jean-Sébastien Côté (composer and sound designer) create an experience that is unconventional and intriguing. A large cube-like contraption is on the stage, turning and morphing (with the help of exceptional, accurate projections and sound) into different scenes: from a dingy hotel room to the stars in the galaxy. These scenes come to life before the audience’s eyes smoothly in practically no time. Even small touches, like subtitles at the edge of the stage when Labrèche speaks in French, add a dimension for the audience, immersing them into Robert’s wavering world.

Even though the Cocteau letters go on too long, and information on the projection screen were difficult to see if sitting on the far left of the theatre, Robert Lepage and his company Ex Machina offer an incredible  experience. As soon as the lights went up, the audience exploded into discussion: people were asking questions, speculating, and offering opinions and interpretations. I have never seen such a reaction from spectators.

By showing his characters overcoming addiction for the sake of creation, Lepage has created an unbelievable show. This was an artistic fix indeed.

Kate Croome writes: Innovative use of lighting and set design elevate Robert Lepage’s perhaps otherwise unremarkable Needles and Opium to a visually stunning masterpiece. Toronto’s Canadian Stage is mounting the first revival of Needles since its 1991 Québec premiere. It is again directed by Lepage, and in terms of technical achievement, the show is wildly successful. Set and lighting designers Carl Fillion and Bruno Matte  have crafted a world on stage that alone is worth the price of admission.

Robertson as Davis, against projections of New York City

The set consists of a large, rotating cube with only three physical walls, in which most of the play’s action is placed. The walls are lined with multiple trap doors containing set pieces such as a hotel room bed. Most of the play’s action takes place on this cube, often while it is either rotating or at an angle, thereby endowing many scenes with added tension as the actors are forced to balance their weight on the ever-shifting set. The contained environment of the playing area adds to the play’s film-like feel, as the walls of the cube create a visual area not unlike that of a movie screen. This idea is further supported by an opening credit sequence that is projected onto the cube, and the use of projections of set pieces and props rather than the objects themselves. Such non-naturalistic choices are very appropriate for a piece depicting drug addiction and delirium. These are only a handful of ways in which the Needles crew plays with technology in order to craft a theatre experience that is bold, fresh, and thoroughly modern.

The cast features stunning performances by Marc Labrèche and Wellesley Robertson III, both of whom have worked with Lepage previously. Labrèche starred in the original production of Needles, and truly he seems comfortable in his role Robert, the heartbroken artist who is thought by some scholars to be an autobiographical character based on Lepage himself. Despite his familiarity with the role, however, Labrèche seems to be making continuous discoveries, and never once seems bored or uninspired by the role. A scene in which Robert pleads with his lost love on the phone is particularly moving for its emotional honesty in this very non-naturalist piece.

Robertson III plays Miles Davis, an unspeaking role which has been added to the piece for the revived edition of the play. Through movement and narration, we follow Davis’s story, from his love for French actress Juliette Gréco, to his spiral into heroin addiction. Robertson portrays the light and the tragedy of this role with effortless fluidity, and his background in acrobatics and breakdancing give him the strength and vitality needed to balance on the cube as he does.

In terms of script, Needles is hardly memorable. While the theme of heartbreak and lost love are universally relatable, the piece simply does not delve into the topics deeply enough to truly be moving. It is difficult to imagine Needles without the inclusion of Miles Davis as a physical role (as was the case in the 1991 version), as it is his scenes that prove the most poignant. It is hard to say whether or not Needles could rely on its script and be successful as a poor theatre piece; certainly, at Canadian Stage with an extravagant budget, it shines.