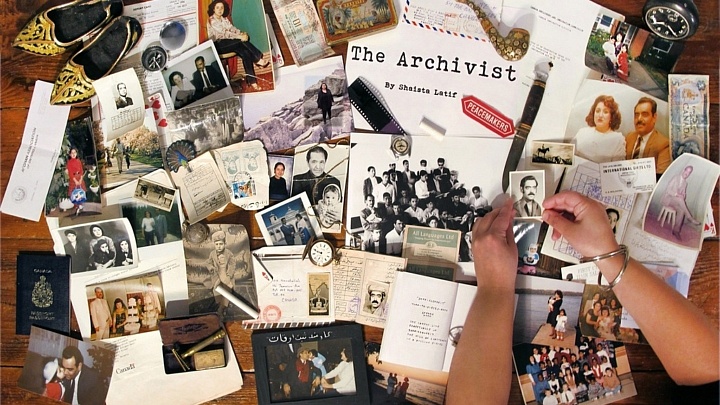 Shaista Latif’s one-person production The Archivist came to St. Catharines as part of a southern Ontario tour in late February, 2020, produced by Why Not Theatre. Via Why Not, Latif reached out to BIPOC in Brock’s Department of Dramatic Arts and invited them to respond to the production – one of several recent gestures by BIPOC artists to address the dominance of Canadian theatre criticism by white voices and perspectives. Here is what two DART students wrote in response to Latif’s invitation.

Jordine de Guzman writes:
I went to see The Archivist when it played at the FirstOntario Arts Centre, and let me first say that it’s an experience unlike any other that I’ve had in a theatre. I’ve been to shows where the actors/performers open up to me through the text they were either given or wrote themselves, but Shaista Latif’s The Archivist found a way to welcome me into interacting with her soul and her history. I’m honestly kind of unsure how to review it because for me, it felt like less of a formal performance and more so a very pure form of sharing who she is. What do I have to say about honesty? Let me just ramble for a bit.

Jasmine Case writes:
I saw The Archivist at its Saturday afternoon showing in St. Catharines. I discovered after the Sunday show that while there were plenty of similarities between the showings, they were also quite different. As a woman of colour I connected with Shaista’s words early in the show. She came into the audience and asked if there were any people of colour. We were all sitting by one another and she came up to all of us and asked us what we say when we are asked the looming question all white people ask people of colour: “Where are you from?” She asked me specifically what I say to that, and I said that I’ll tell them that I’m from Canada, until I get to the specificity of the city I was born in. It can get to the point where I will just say “screw you” because it feels so rude for this question to be asked five times and for them to not get that I was born in Canada.

The show continued and it was nice to not feel like the “other” in the audience for once. Shaista was clear that she was a woman of colour and that she supported the other people of colour in the audience. In the show that I saw, she came into the audience and asked people if they believed in war. She only asked white people this question, so it was interesting to see their reactions. I heard that during another show she asked people what trauma was to them, and this didn’t go over well, from what I heard. We talk about making people feel uncomfortable in the theatre but people shouldn’t feel unsafe. Because I was not in this show I’m not sure how the audience felt; however, as an actor I would never want to make my audience feel unsafe because this breaks the trust between audience and actor. I feel she could have approached the audience in different ways, or altogether not asked the audience what trauma means to them because we can never know what they have been through in their lives. She could have gone about it a lot better than she did, rather than forcing audience members to participate.

That being said, it was great seeing her take back her power and tell everyone in the room that was exactly what she was doing.

Tags: FirstOntario performing arts centre•Shaista Latif•theatre criticism in Canada•Why Not Theatre
OlderA new take, and a call to action: Watching Glory Die at the Grand Canyon theatre
NewerBehind the Scenes from an Execution