“Issues of power and privilege – who has it, who doesn’t have it, how is it shared – aren’t specific to institutions; they are being dealt with daily in the professional arts community too. If honest conversations are had in the community, with the intention of learning and creating safe spaces for everyone, then we can prevent situations – like the inciting incident of Pipeline – from happening in real life.”

These are the thoughts of Suitcase in Point’s outreach coordinator Marcel Stewart on why the St. Catharines-based theatre company teamed up with Brock University’s Walker Cultural Leaders series to produce a two-day series of events around power, privilege, race, and theatre. Called Pipeline to a Better Way, the series includes discussions with theatre professionals and community members at Suitcase in Point (on Saturday, November 9); and, in the Marilyn I. Walker Theatre on November 10, a staged reading of Dominique Morisseau’s 2017 play Pipeline, the title of which refers to the widespread perception of a school-to-prison pipeline for young African-American men; and a keynote address by Ravi Jain, one of the most dynamic figures in Canadian theatre, about innovation and leadership.

The questions these events are raising are very important, but they’re hard, and personally challenging for me. I still don’t have the confidence or the knowledge to know what to say or what to do. I’m a white woman – where is my voice in this? Should I even have a voice in this, or is it not my place? How can I make a difference without perpetuating the problematic narrative of the “white saviour”? This weekend may not be able to answer those questions, but at the very least we can start discussing things that, frankly, many of us have been too afraid to talk about.

That’s where we need to start – with an awareness of the issues going on around us and an openness to having those conversations. And audience members will get a chance to ask questions – at the Suitcase in Point events, and at a talkback and Q&A with Cox, Jain, and cast and creative team members of Pipeline, after the reading. 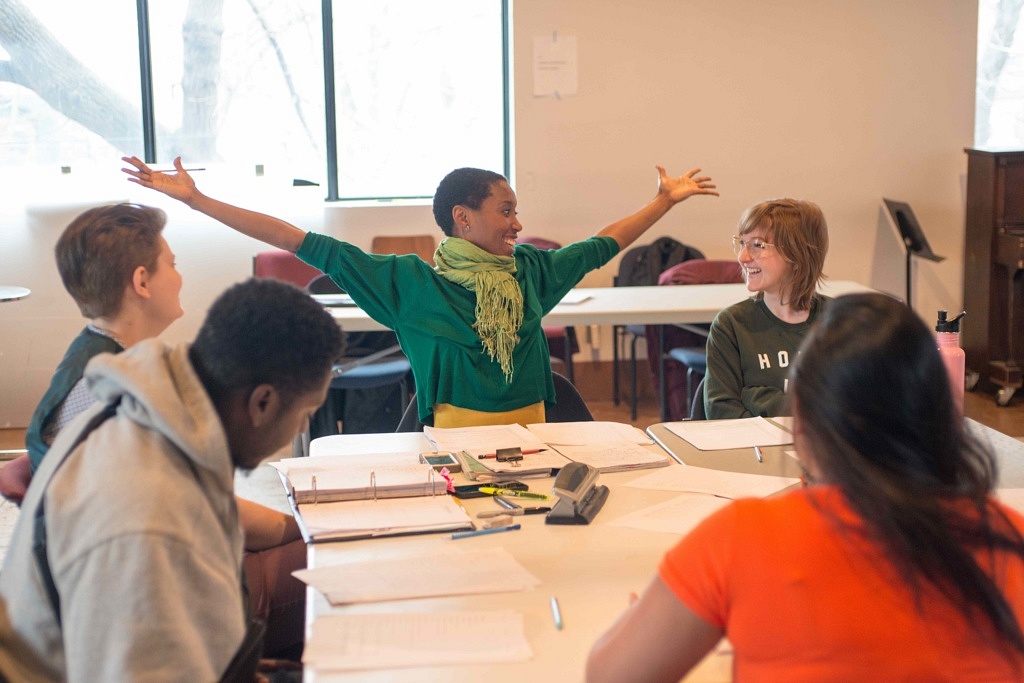 Lisa Karen Cox in a rehearsal process in Toronto. Photo by Jorjas Photography.

DART assistant professor Danielle Wilson is spearheading the event, which grew out of her interest in Morrisseau’s play and her awareness that it would be difficult to stage at DART, because it requires actors of evidently different generations, but also because the student population is mostly white. “I was interested in presenting a play about a specific population that is not often represented on stage in our department or our community,” says Wilson. “The Marilyn I. Walker School of Fine and Performing Arts is a place of both learning and artistic creation and I felt the play was a perfect fit as part of the Walker Cultural Leaders series.”

Pipeline is the story of a young Black teacher’s struggle to protect her son, Omari, after he assaults his high school teacher for aggressively singling him out to answer why a book character behaved like an “animal” and murdered a woman. Omari believes he was being asked to be the teacher’s “token responder,” and that there was a racialized subtext behind the teacher’s request. This spirals into a story of heartbreak, love, loss, the struggles of parenthood, and the struggles of the Black community.

The staged reading at Brock is being directed by Toronto-based actor, director, and producer Lisa Karen Cox, and features a cast largely made up of seasoned and emerging professional actors, with Brock students also participating onstage and behind the scenes. Of the six-person cast, five are people of colour.

Cox explains that to her, the play is about “the trauma of exclusion and ‘othering’” especially as it relates to Black individuals: “All of the characters are suffering from feeling helpless, hopeless and exhausted,” says Cox. “While their exhaustion is palpable, so is their fight to not to be helpless and hopeless, their fight to remain afloat. It is the fight that many groups of people may feel – but as a Black mother myself, there is a specific… pressure faced by Black people, by Black mothers, especially in the United States, where this play was written, but also here in Canada. Our Black boys are graduating at lower rates than the rest of the population; the expulsion and suspension rates they are facing is higher than the rest of the population. How do we ensure that our Black boys are successful? Well, we can start by ensuring that they receive the same compassionate treatment as everyone else. We are often driven to protect our babies out of fear, but how do you protect your baby from the system?”

In a separate conversation, I asked Ravi Jain what we can expect from his keynote address around these questions about race, exclusion, and power. Jain is the artistic director of Why Not Theatre and is nominated for the 2019 Siminovich Prize for excellence and innovation in Canadian theatre directing. Among his current projects is a major Why Not Theatre production of the Hindi epic Mahabharata, which the Shaw Festival commissioned and is presenting in its 2020 season.

Jain promises that his address (for which there will be ASL translation) is not going to be a lecture about how we’re failing as a theatrical community to represent people of various backgrounds, but will rather assert that different perspectives are what make art interesting.

Although the terms “equity, diversity, and inclusion” are popping up more and more in discussions around theatre and culture more broadly, Jain is not a fan: “I’m not interested in using those words any more… The words are really meaningless. You either do it or you don’t, and how you do it demonstrates to me how invested you actually are in the conversation. You’ve just got to read shit, you got to look around, you got to wake up to what’s happening and you’re either a part of that change or you’re the thing in its way.”

Terms he likes better are “innovation” and “future”: “Why do you ask Ravi to come and talk about equity, diversity, and inclusion? Why do you not come and talk to him about innovation, and the future of Canadian theatre? They have a very different sound to them. One is broccoli, and one is chocolate cake… Innovator is meaningful. Future of theatre is meaningful.”

An event like this – broaching such culturally hot topics and putting them into dialogue with an important contemporary play that treats those topics, involving our university population and the professional arts community – demonstrates DART’s praxis philosophy. It’s the first thing that happened like it in my knowledge of the Marilyn I. Walker School. Students, faculty and staff, and audience members will have the opportunity to engage with innovators in Canadian theatre who are thought leaders around questions of race, power, and privilege. As Jain says, it’s vitally important to be aware of different perspectives and experiences. I encourage you to seize this opportunity to ask questions, gain awareness, get educated, and be a part of the future of Canadian theatre.

The Brock-based events on Sunday, November 10 are free of charge but tickets are required: brocku.universitytickets.com. Information about the Suitcase in Point events on Saturday, November 9 is available at suitcaseinpoint.com. The Pipeline illustration was created by James McMullan and is used here with his kind permission. 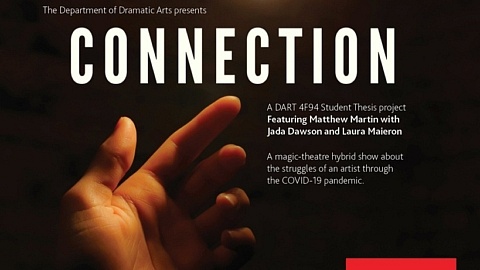