Back… and queerer than ever: Bold new performance at In the Soil 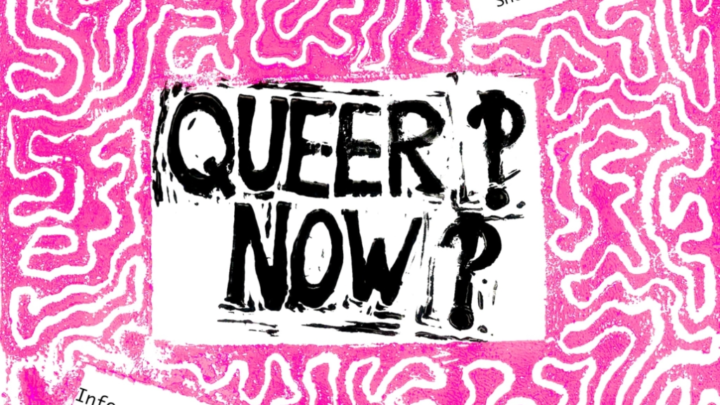 One year ago a group of students from Brock University presented QUEER‽NOW‽ to the world. It was a show that was not only the director’s undergraduate thesis project, but also an experience that was unapologetically queer. The team was comprised of Max Hunter, Ari Para, Dael M. Cooper and me, each of us taking part in devising the piece to tell our own stories and offer our own perspectives on queerness. QUEER‽NOW‽  began with Max Hunter’s original idea and they led the project as director, but it was emphasised to all involved in the creation process that the play belonged to all of us: ideas, moments, questions and fears were all shared in collaboration and hierarchies were pushed aside so all could work equally with their own experiences. It was unapologetic, provoking, and allowed   for myself as a young performer to be vulnerable and open; I found comfort in the audience’s willingness to encourage us on from their seats as well as tell us their thoughts after the show. Many agreed it was fun to watch, but there were critiques that it may have needed more time to come together into a cohesive piece. 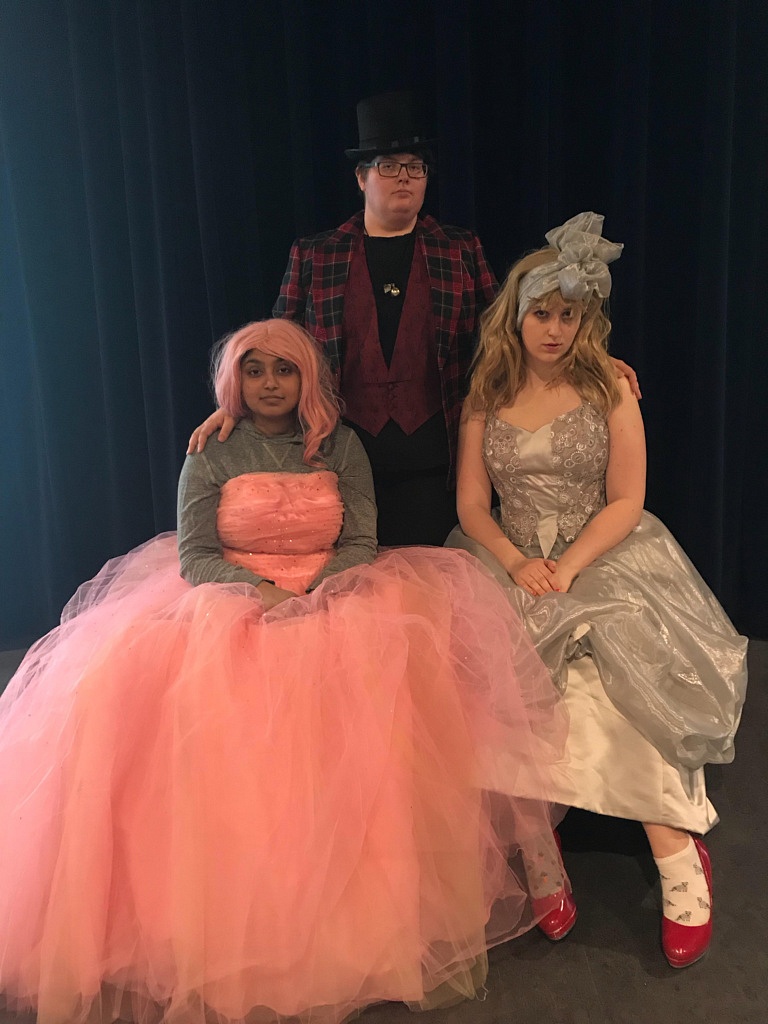 Ari Para, Heather Janser, and Max Hunter, who featured in the 2018 version of Queer?! Now?!

QUEER‽NOW‽ was a performance that did not prioritise plot. Instead it let personal stories and moments of creativity burst forth through monologues, movement pieces, videos, music, and small scenes between characters.

(foreground) Dael M. Cooper and Max Hunter; (seated behind them) Heather Janser and Ari Para in the 2018 Queer?! Now?!

And if you missed it that first time, and still want to hear all the dirty jokes and laugh along with awkward everyday queer moments, then don’t worry! Because we’re still here and still queer and ready to shout it from the rooftops. QUEER‽NOW‽ is coming back to the In the Soil Arts Festival in St Catharines to make a scene at the Odd Fellows Temple. This second production will have some differences from its first run. Max Hunter, now a graduate of Brock University’s Dramatic Arts program, will continue in their original director/performer role for this adaptation, but several of the other performers and creators have changed.

New participants in QUEER‽NOW‽ include Ashley Cackle, a trans performance artist and metal musician, who describes their work as “grounded in anarchist ideology, often intertwined with acts of deviant blasphemy.” There are also new guest performers and writers with a background in poetry. I have taken a step back and am contributing to the piece through review and reflection. Via my personal criticism blog, QPOV (Queer Point of View), I am offering an insider perspective on what QUEER‽NOW‽ was like in the past for queer performers and queer audiences, what has the potential to change in this new version, and what I hope it offers to the queer community. All of the content I create is public and has been offered to Max as a reference and tool as they devise the upcoming QUEER‽NOW‽ 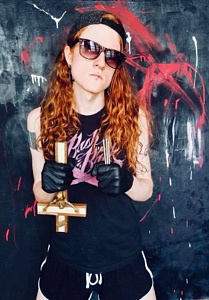 In addition to casting, the changes to QUEER‽NOW‽ also include a shift in the production’s message. While the initial show was about creating a queer experience for queer people by queer people, the intent has altered to be much more political. Through several online and phone interviews, Max emphasised their hope “to really focus on unpacking where and how we can push the boundaries between politics and performance… [the show] focuses more openly on transness a core theme.” These themes resonate with Max and Ashley closely as trans individuals, who live their lives “so incredibly influenced by experiences of gender and transness,” as Max puts it. Every day there are more and more discussions about trans issues and trans rights in Ontario –about individuals advocating for trans identities to not only be tolerated but understood and respected. Even though doors are beginning to open for recognition of the trans community, there are still moments where voices are not being heard, such as the Ontario government’s recent moves to remove references to gender identity from the sex-ed curriculum. Actions such as this have an impact on the trans community, and can unintentionally communicate to them what their government infers or thinks about their lifestyle. This can cause frustration and anger, and QUEER‽NOW‽’s  creators are coming up with ways to cope with that anger through art. They are using the show as a way to talk about what is important to them, working that line between seduction and provocation, literal and political, the audience who watch and the marginalised who are put under that gaze. 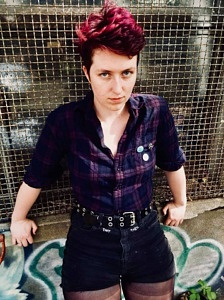 Another of Max and Ashley’s goals is to demonstrate the everyday life of queerness, and how such an existence is politicized by constantly having to debate one’s right to be heard and rights to safety that have long been ignored. By simply existing in the everyday as trans, one is made political. Max and Ashley intend to take advantage of the theatre space and the conventions associated with it to have their voices heard “in a way that is all too rare,” says Max. As the core creators of QUEER‽NOW‽ they are aware of the show’s potential to spark discussion, to bring up questions that are sometimes difficult to answer.

There are many things which spurred the re-staging of QUEER‽NOW‽: not only a one-year anniversary to reflect upon what has changed in the queer community, but also the need for activism in said community. How do we cope with resistance that makes us feel like we aren’t yet being heard? What can one do in the face of fear and anger? QUEER‽NOW‽ is stressing the importance of protest, as sometimes the creators feel that they are not even allowed to resist ideas that are silencing them. Max is bringing their personal experiences with such issues to the show: “If we aren’t allowed to protest in the traditional sense if we’ll be arrested for doing so and/or experience violence for doing so, we can still try and protest onstage.” They expand on the connection of such protest to larger questions of embodiment and gender identity: “Can we, as trans individuals and community members, ever really stopperforming?”

Music is another large element of the show, with punk and metal being prominent music genres that the creators have taken as inspiration. Other forms of performance, such as drag and strip shows, are also present in abundance, creating a show that aims to be comedic, raw, and thought-provoking all at once.

Max warns audience members to prepare to be feel unprepared. There will be a mash-up of many art styles and many forms of media, but they assure that the show is sensory-friendly. Even though the creators hope to make the audience uncomfortable and questioning, the space itself will be free for anyone to come and go and explore on their own terms. All are welcome to come in with an open mind as Max and Ashley are “here and queer to be your guides.”

The QUEER‽NOW‽ project has a Gofundme page to assist with production costs and support the members of the cast and crew, ensuring they have the means to continue the project through its run and creating the potential for more performances in the future. They are all working hard to make sure that QUEER‽NOW‽ can be brought into the now and exist in its present moment, forever changing and creating with different people and different relationships.

And if all of this queerness isn’t enough just yet, there will be more to discover and explore on QPOV! This is my Tumblr page dedicated to reviewing theatre from a queer perspective –which includes me getting very excited when the chance to talk about more queer theatre comes along. QPOV will follow QUEER‽NOW‽ through its run at the In the Soil Arts Festival… so get ready for the queerest start to a lovely summer.

Tickets and more information at inthesoil.on.ca.

Tags: Ashley Cackle•In the Soil Arts Festival•Max Hunter•queer theatre and performance
OlderEmbedding with Shaw: Adaptability and Precision in the Final Stretch of Rehearsals for The Horse and His Boy
NewerDopoLavoro Teatrale’s Inferno: Building the Fire