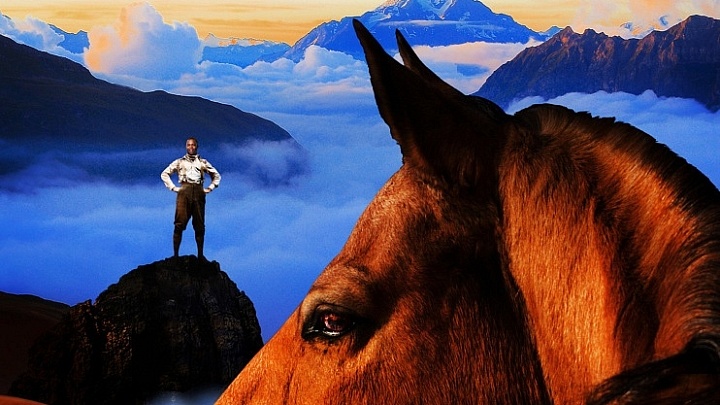 In their final post, our team of embedders at the Shaw Festival discuss their experience sitting in on a technical rehearsal and watching the world of The Horse and His Boy come vividly to life.

Well, readers, we have followed the map right to the end with our final trip to the Shaw Festival. For this last visit, we have the opportunity to view an onstage technical rehearsal. This is when the show is finished in the rehearsal hall and moves onstage for the technical elements to be added. During rehearsals like these, simple scenes generally take longer so that all of the lights, sound, and special effects work together seamlessly. 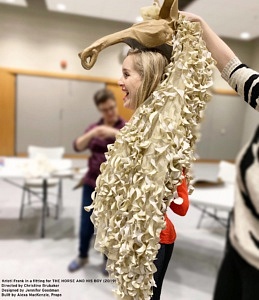 As we enter through the front doors of the Festival Theatre, we are met again by Suzanne Merriam, Shaw’s senior manager of education. She gives us a little tour of the Theatre and shows us how to leave at the end of the night since we will be there after hours. She shows us where we will be sitting in the theatre, in what they call the back-orchestra area, towards the back of the main seating area. We happen to be right behind where Deanna H. Choi (composer and sound designer) is set up for the run. From our excellent seats, we wait for the rehearsal to start. As actors start trickling into the theatre, the tech team is already hard at work, programming lights, working on projections, figuring out sound, and preparing for the rehearsal to officially begin. As Assistant Stage Manager Annie McWhinnie works on the set, she says “Hi” to us at the back of the hall. Merriam notes that McWhinnie is clocking our presence so that she can relay the information back to the actors that we’re in the audience for the night. The actors greet us before going onstage with a lovely “Hi Brock friends!” in unison.

The rehearsal is underway. The technical elements are stunning from the get-go: the stage floor is covered with fog for an intimate scene between Shasta (Matt Nethersole) and Aslan (Jenny L. Wright). Director Christine Brubaker requests more fog since there is a line about Shasta being unable to see his hands. The creative team politely respond that for the rehearsal, they do not want to use the fog to its full extent to protect everyone’s lungs. Even though the fog isn’t at its full capacity, it still creates an atmosphere of mystery that fits the scene, in which Shasta is unsure of who he’s talking to, leading to him to wonder if it is all a dream.

The scene ends with Shasta on the ground, and at first, Nethersole is lying down as if he is sleeping. Brubaker asks if he can instead cover his head in anxiety, and we are amazed at how Nethersole immediately receives and embodies the note. During this scene, a misty forest is projected using a leaf gobo (a metal square put into a light that then projects a pattern or shape onto the stage). To help enhance the atmosphere of a forest, four panels of trees are brought onstage like a construction worker backing in a truck. This is done in a humorous way: Jay Turvey, at this point playing a beaver, orders the stagehands to push the trees out while simultaneously having a conversation with Shasta. At this point in the show, most of the actors portray animals who hear of an invading army and attempt to help Shasta. Kristi Frank stands out as a goat because her vocal impression of a goat is impeccable to the point where we question if it’s recorded (it isn’t!). Costume designer Jennifer Goodman’s choice of footwear makes it look like Frank has hooves, complete with fur and a heel that clicks when she walks.

This scene transitions into one we saw in our second rehearsal visit, in which Prince Corin (Stewart Adam McKensy), Susan (Jacqueline Thair), Edmund (Drew Plummer), and Tumnus (David Ball), all decked out for war with their armor, come across Shasta. Once they’re alone onstage, Corin convinces Shasta to help him fight in the war despite everyone else’s orders not to. The last time we saw this scene, there were issues brought up around the armor (mainly about which performers will carry various pieces of equipment onstage). It is interesting to us that the same problems still exist: they’re still determining who’s going to hold what weapon, how items are passed between them, and how the armor will be divided between characters. 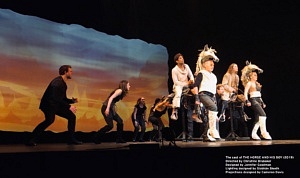 The rehearsal then moves to arguably the most heightened moment in the show – the battle between Susan’s army and the Calormene army. Lighting designer Siobhán Sleath works to ensure that each actor is lit properly, given that many have solo moments during the battle, including a corridor of light for Shasta at one point. Alexis Milligan, the movement director, is right in front of the stage coaching the actors as they work through the choreography. When the creative team decides to run the scene with tech, Ball requests on behalf of the actors that they take it at half speed until they feel safe with the choreography since the weapons are fairly new and the actors have never run the scene with lights and sound. Choi also gets involved in her capacity as sound designer, running back and forth trying to make sure the speakers are working so the actors can hear the music cues through their helmets for their entrance march. After multiple runs focusing on different elements (spacing, sound, lighting, and so forth), they wrap up the rehearsal with a final run of the battle, combining all tech elements. We are excited to see the final product — this scene in particular and the show as a whole, when it goes into previews! Even after the rehearsal is over, Brubaker checks in with the creative team to make sure they’re on the right path moving forward.

We Chroniclers of Narnia are beyond grateful to have had this opportunity to witness the creation of The Horse and His Boy. Experiencing the courage, love, adventure, and friendship among the characters has been inspiring and we cannot wait to see the full story. We also cannot wait to see the horses in action (finally!). Now snap, snap, and follow the map down to the Shaw Festival to see the world premiere of The Horse and his Boy, playing in the Festival Theatre through July 21!