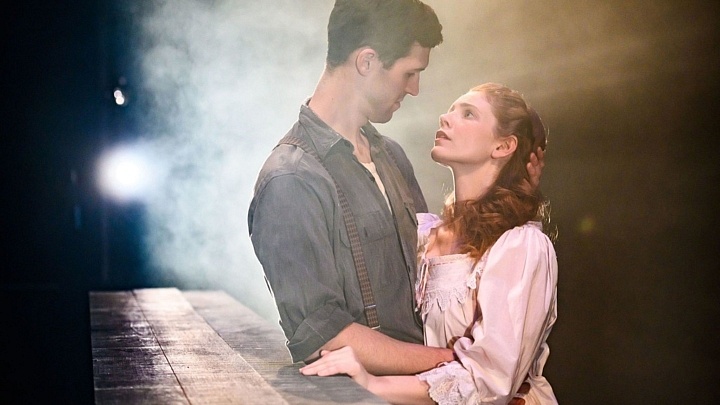 The DARTCritics journied to Crow’s Theatre to see Stephen Massicotte’s play Mary’s Wedding, directed by Kent Staines. Students Dani Shae Barkley and Gwen Anderson express their thoughts below, although in relatively different formats. Dani Shae conveys her experience through text while Gwen elects to explore criticism through a visual lens. Both weigh in on the impact of the themes and performance on the audience: 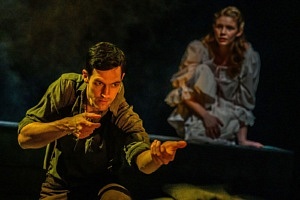 I am not surprised that, since its inception in 2002, Mary’s Wedding has been produced more than one hundred times internationally. Today, when meeting a veteran of the Great War is no longer possible, Stephen Massicotte’s script triumphs over a generational gap the size of a century.

In this dramatic duet directed by Kent Staines, the audience witnesses the story of Charlie (Fraser Elsdon) and Mary (Kate Ross), as they fall in love during the onset of unfathomable war. Evidently, the Solo Productions creative team uses romance as a vessel in their delivery of a story about wartime sacrifice. Ross and Elsdon enact their love for each other adeptly, which is a reasonable feat considering they are a married couple offstage.

Embodying Massicotte’s script, Ross and Elsdon transport the audience back and forth from the Canadian countryside to the trenches in France. In Mary’s dream world, Ross has the trying task of flipping back and forth between two personas: Mary and Sergeant Flowerdew (“Flowers”), Charlie’s military commander. Playing Mary, Ross embodies the freshness of new love. Her transitions from Mary into Flowers are seamless, but, when she inhabits the male role, Ross lacks authenticity. Her genuineness as Mary is lost in exaggerated facial expressions and posture as Flowers. Although Ross’ exaggeration does allow for a clear shift from one character to the other, Flowers is a character played by Mary and Ross’s authenticity becomes distorted in that removal. Similarly, Elsdon emotes genuinely when he is experiencing love on stage, but on the battlefield, his fear is not believable. The verbal proclamations of anxiety that Massicotte has written into his play-text are not matched in Elsdon’s face or gesture. The ever-present twinkle in Elsdon’s eyes, along with Ross’s unrealistic exaggeration as Flowers, distracts the audience from engaging in Staines’ hope for a “sober[ing] reminder of the sacrifices made in the name of war”, as expressed in his program note.

The designers bring Staines’s vision to life. The set design (David Boechler), consisting of a slanted riser surrounded by a grey boardwalk, makes for flexible transitions. The actors often do not leave the stage during scene changes; rather they change locations without changing props or costumes, so crisp, clear transitions are crucial for the execution of a comprehensive plotline. The sound design and musical composition (Creighton Doane), coupled with the lighting design (Jason Hand), assist in these transitions, carrying the audience from violins to gunpowder and from peaceful Canadian landscapes to the war-torn French countryside.

Romance is only half of the significance in Massicotte’s story. The other portion is the audience’s witness to the human experience during wartime, which was not addressed by every facet of this production. Nevertheless, the audience was sobbing tears of sadness and compassion by the end of the play, undoubtedly due to the timeless beauty of love captured by the actors. Massicotte’s classic, wartime love story, in combination with the elegant work of the designers, forges a successful Toronto premiere of this Canadian monument.

Of the many things theatre can be, it is visual. I wanted to create a review that included this component of visual experience, and this project (for the course DART 3P95) allowed me to recreate some of the most striking images I received while attending Mary’s Wedding at Crow’s Theatre in February, 2019. The following series of illustrations follow the description / analysis /judgment framework of a theatre review and divides into blatant, subvisual, and experiential artistic responses to Mary’s Wedding. Blatant refers to initial visuals and descriptive elements, subvisual analyses images created through the unfolding of plot and character development, and the experiential lens gives an interpretive and critical reflection on the show. These illustrations are part of my effort to reconsider the ways we respond to and converse critically with theatre. I also wanted to prompt consideration of critical illustrations and ask how they might elicit a different response – perhaps a more subjective experience – than what a written review lends its audience. 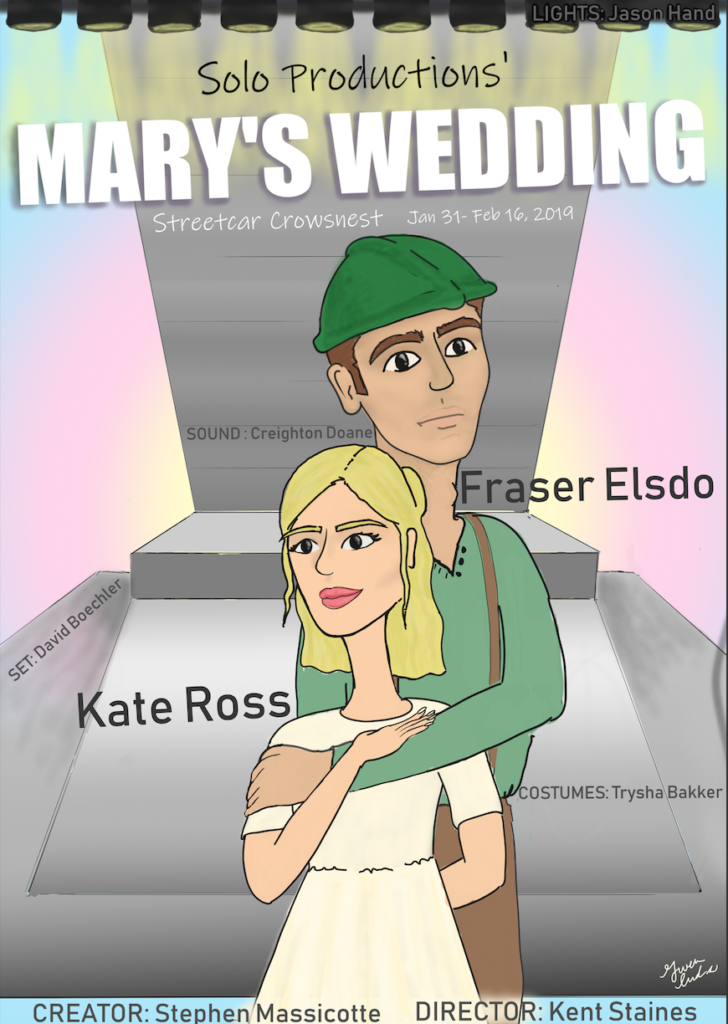 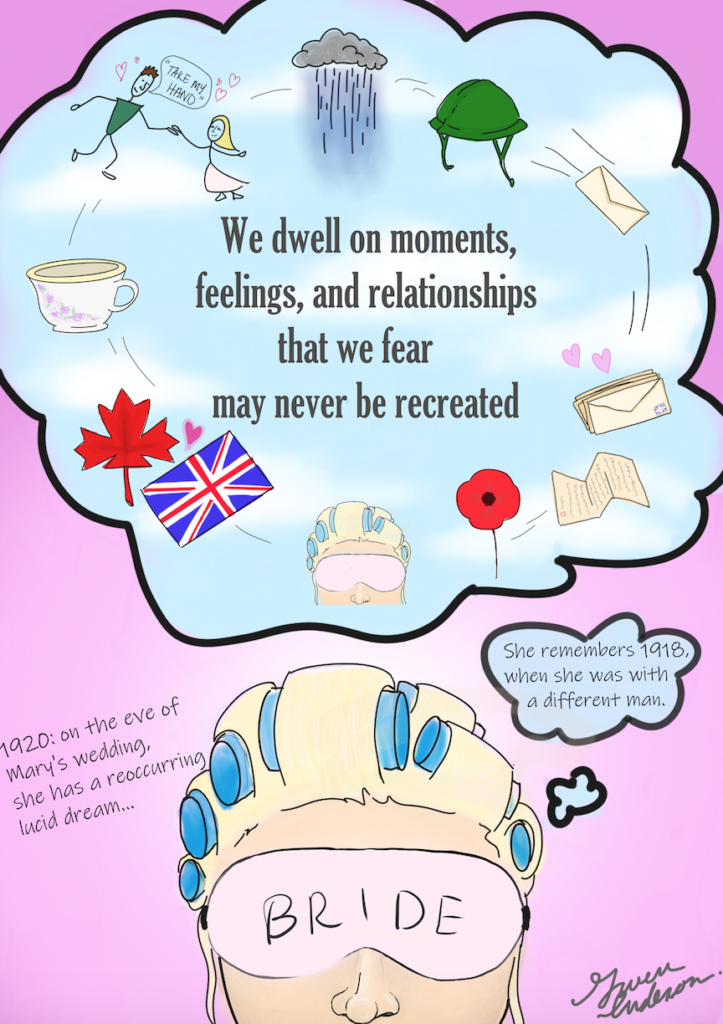 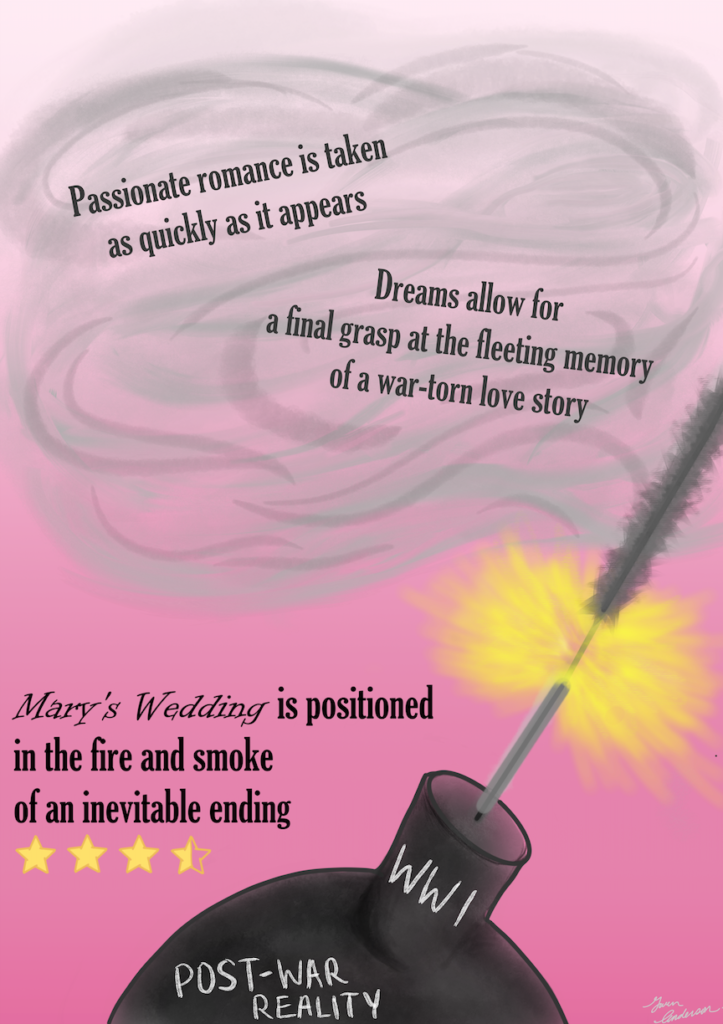