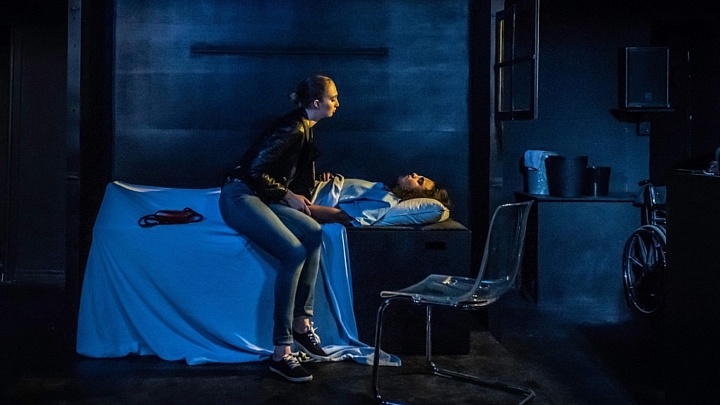 Life is crazy and gruesome, at least the way Doug lives it. Rajiv Joseph’s play, Gruesome Playground Injuries, features laughs, cringes, and a touch of childish curiosity. We see the characters Doug (Anurag Choudhury) and Kayleen (Alice Lundy) jump back and forth through their lives, each with their own injury to bond over. Whether it’s Doug’s sprained ankle or Kayleen’s sensitive stomach, these friends keep finding each other when they need it most. It’s a story filled with gritty moments, and it’s impossible to ignore the intimacy that runs through the space.

The Assembly Theatre’s stage lends itself to this intimacy, bringing the audience so close that it’s possible to take in every element of the theatre. Chris Bretecher’s flexible design depends on detail instead of spectacle. 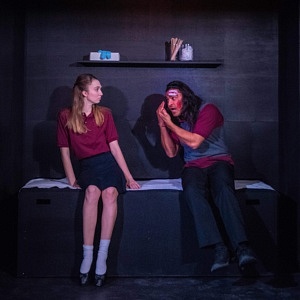 In a patterned cycle of scenes, the actors go through snapshots of the characters’ lives and then reset with costume changes and set rearrangements. The eye is drawn to the sides of the stage, where all the necessary costumes and set pieces lie in wait in full view of the audience, as dictated by Joseph’s stage directions. We see how each scene is built from an empty stage, and this builds suspense. Why has Doug changed into a sweater vest? Why did Kayleen put makeup on her thigh before finishing dressing up? The continuous build and release of the scenes—though occasionally repetitive and sudden—reads like the highs and lows of the characters’ lives.

The connection between the actors and their characters made me smile. Choudhury’s performance demands attention in every scene, and the witty remarks had me laughing well after the joke passed. And while Lundy may stumble over some lines, this doesn’t detract from what is trying to be said.

Childlike curiosity drives Doug and Kayleen to share pain. They are stupidly brave in the face of it. Bretecher says in his program notes that he directed this play in hopes of showing that they “support and love one another.”  I believe that while they are not a perfect couple destined to be together, there is a support in their relationship that stems from understanding. By understanding the pain, they understand each other—and what they need. What is communicated is that true support comes from being brave enough to sympathize with the pain of another.

What is it that brings us together? Well, according to Leroy Street Theatre’s production of Gruesome Playground Injuries, it’s pain. The story follows the relationship between Doug (Anurag Choudhury) and Kayleen (Alice Lundy), jumping through time exploring the various traumas of their lives, with each trauma continually forcing them apart or bringing them together in a continual cycle of misunderstandings and awkward yet intimate moments.

These jumps through time are accomplished by a series of performative transitions—the actors prepare for each scene putting on makeup and changing costumes on either side of the central playing area, which might otherwise serve as dressing rooms. This turns the entire space into an actors’ playground, in which all aspects of the performance are open for the actors to explore. The intimacy of the space prompted some audience members to speak freely before and after the performance, despite the fact the actors were already onstage playing in the dressing room space. It certainly seemed as though the traditionally voyeuristic nature of the audience was dissolved as actors made direct eye contact with some spectators.

The performances of both Lundy and Choudhury are expertly executed. Despite the frequent changes in the characters’ ages, physical conditions, and mental states, the actors navigate these circumstances with a sense of ease. This allows for things such as Doug’s many injuries to augment the core action of each scene about Kayleen and Doug’s relationship, rather than distract from that action. Even during the transitions, each action is inhabited and deliberate. This is most apparent when makeup is applied for each scene; I kept wondering what each new cut, bruise, or change of complexion meant for the story. 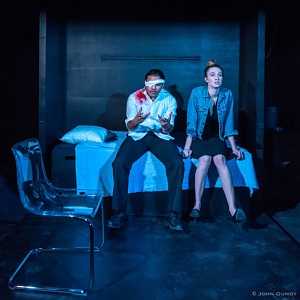 Unfortunately, this was not enough to keep my interest throughout the entire show, because the visible transitions became a significant distraction. Perhaps they are meant to indicate that personal development continues outside of the moments we see each other, that our struggles and pain go on, not only in the extraordinary, but in the mundane. I could only speculate at director and designer Chris Bretecher’s intent. Due to the long transitions, each scene would build itself up, and then drop. The next scene would struggle to climb back up to a greater level of intensity, resulting in a slow and sporadic pacing that left me frustrated and dissatisfied by the end.

Despite its quality and precision of execution, Gruesome Playground Injuries plays more as a proof of concept than a coherent production, sacrificing the integrity of the overall theatrical experience by insisting on cleverness.

Watch below as Heather Janser delves further into the relationships in the show from a queer perspective in their series QPOV: