DARTcritics Presents: Backstage Pass (The Tale of a Town) 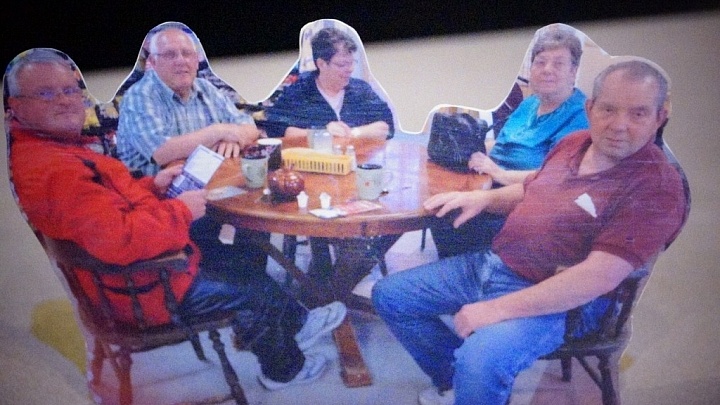 “You know theatre. The lights, the sound, the spectacle. When you take your seat in the auditorium, no matter the size, you know you’re in for a treat. Audiences come from far and wide to be whisked away into thrilling tales of love, drama, comedy, and more. We come for what’s on stage, but what we don’t get to see is what happens just beyond the wings. A whole second show of sorts is taking place, and we, the audience, aren’t even aware of it. We want to draw back the curtain and reveal the inner workings of theatrical productions.” — Backstage Pass

Welcome to the first instalment of Backstage Pass! This project, proposed and led by Class of 2017-18 DARTcritics Lianne Major and Tsipporah Shendroff, aims to examine and showcase the different kinds of labour that go into making theatre productions by photographing the various work spaces of theatre companies. Lianne and Tsipporah’s final project will be to compare and analyze the differences between two theatres – the Shaw Theatre, a major institutional theatre, and Essential Collective Theatre, a small St. Catharines professional theatre – examining how the scale and means available to a theatre affect the nature and distribution of its labour.

In addition to being hosted here, Backstage Pass can be found on Tumblr and Instagram.

In their first photo essay, Lianne and Tsipporah look to The Tale of a Town, FiXT POiNT’s community-inspired show that has toured across Canada, exploring how FiXT POiNT’s unique creation process and touring method (they drive, live, and work inside the same van-turned-Storymobile!) impact the labour and production means of the project.

200 communities, 3000 interviews, 200 collaborating artists. This is the story of The Tale of a Town Canada. Created and performed by Lisa Marie DiLiberto and Charles Ketchabaw of Fixt Point Theatre, Tale of a Town Canada shares the histories of main streets and downtowns all across the country.

The show, which was once performed in various storefront locations, is now being performed in regional theatres, such as the First Ontario Performing Arts Centre in downtown St. Catharine’s. In keeping with their idea of embracing and engaging with the community, DiLiberto and Ketchabaw hire as they go, looking for local musicians, designers, and singers to perform in each respective city. 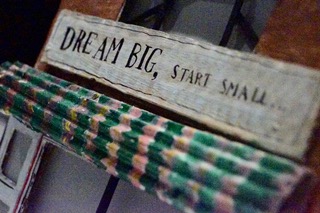 The creation of Fixt Point’s production “The Tale of a Town Canada” has been an ongoing process. What started as an idea in the minds of Charles Ketchabaw and Lisa Marie DiLiberto has turned into a story that’s been shared with the entire nation. This is the untold story of all of us. It’s our past, our present, and our future. Influenced by interviews with over 3000 locals in over 200 communities, “The Tale of a Town Canada” aims to unite us all under the common idea of what it means to grow up Canadian. Photo by Lianne Major and Tsipporah Shendroff. 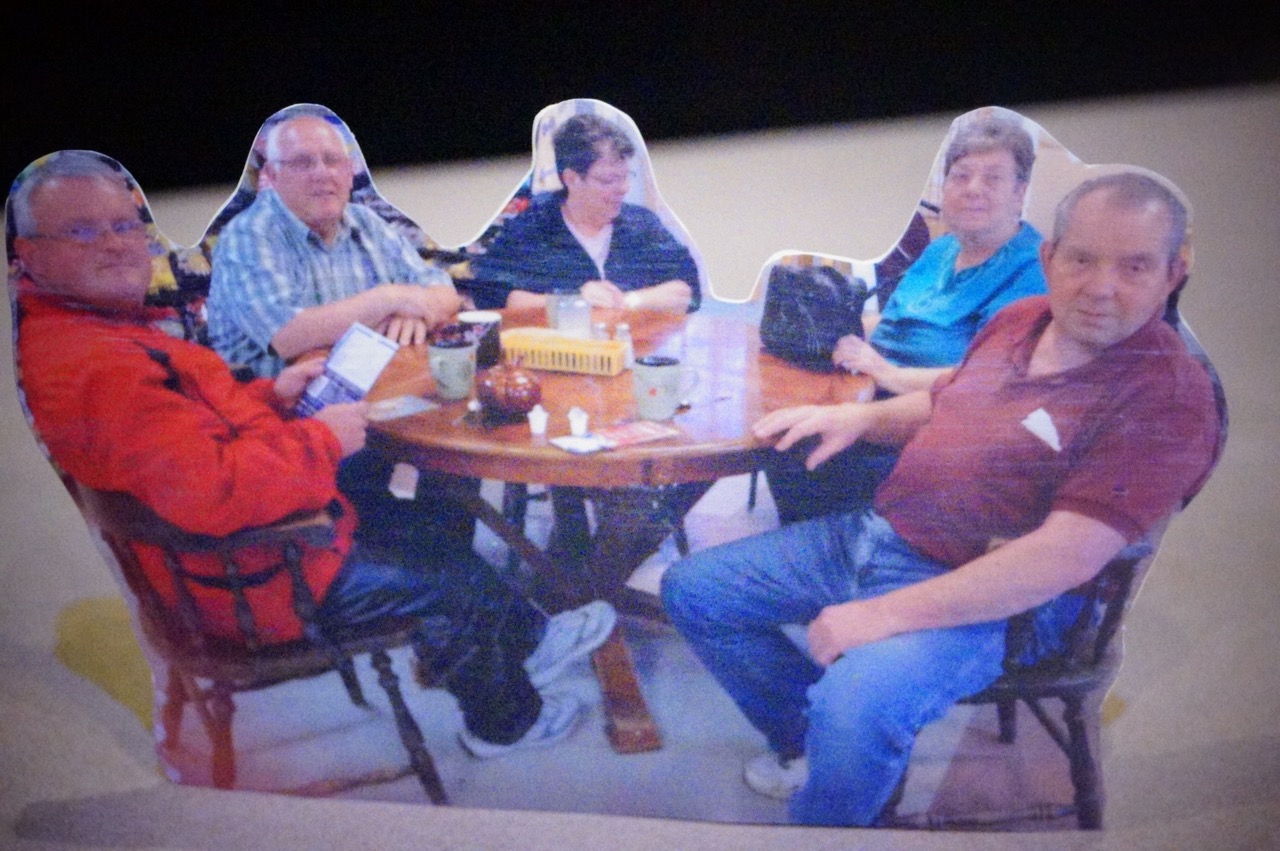 Community played a vital role in the creation of the show. Throughout the process Charles Ketchabaw and Lisa Marie DiLiberto interviewed thousands of different people from hundreds of different Canadian communities to ask what made their town just that – their town. These anecdotes were the foundation needed to create the final show. The show itself could not exist without these stories – or without these people. Photo by Lianne Major and Tsipporah Shendroff.

As a smaller community theatre production, DiLiberto and Ketchabaw have to be strategic when it comes to the crew that they are able to hire and the rehearsals that they are able to have. The show is nothing less than a feat of technical madness, most of which is organized by Ketchabaw himself. His skills as a theatre technician help the production save money by having him arrange and perform the audio cues throughout the performance. He hangs the lights alongside the theatre space’s technicians during the production’s load-in, and the technicians adjust and focus the lights as needed. A lighting designer was hired to create the basic overall lighting plot for the show (a lighting plot which involves more than 150 cues). A stage manager was also brought on to tour with the production.

In an interview conducted with DiLiberto, she shares with us that they are only able to have 3-4 days for technical and dress rehearsals before the show opens. She also mentions that this is her first time performing the show since 2011, as she used to direct the show. This allows her to make the show more personal, as she is sharing her own experience of what it was like to drive across the country. 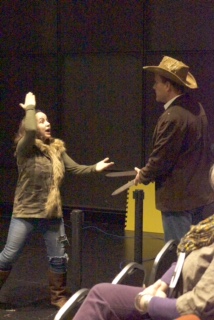 More community involvement! But this time, in the actual performance! Here, Lisa Marie DiLiberto works on a segment about town mayors with real-life St. Catharine’s mayor Walter Sendzik. On every stop of their tour, DiLeberto and Ketchabaw reached out to public figures and members of the community and invited them to perform. Along with Walter Sendzik, the St. Catharine’s performances featured local musicians and and local choir. Photo by Lianne Major and Tsipporah Shendroff.

Armed with a camper van that doubled as a sound studio, Charles Ketchabaw and Lisa Marie DiLiberto, along with their two kids, traveled across the country to collect stories to use in the production. Photo by Lianne Major and Tsipporah Shendroff. 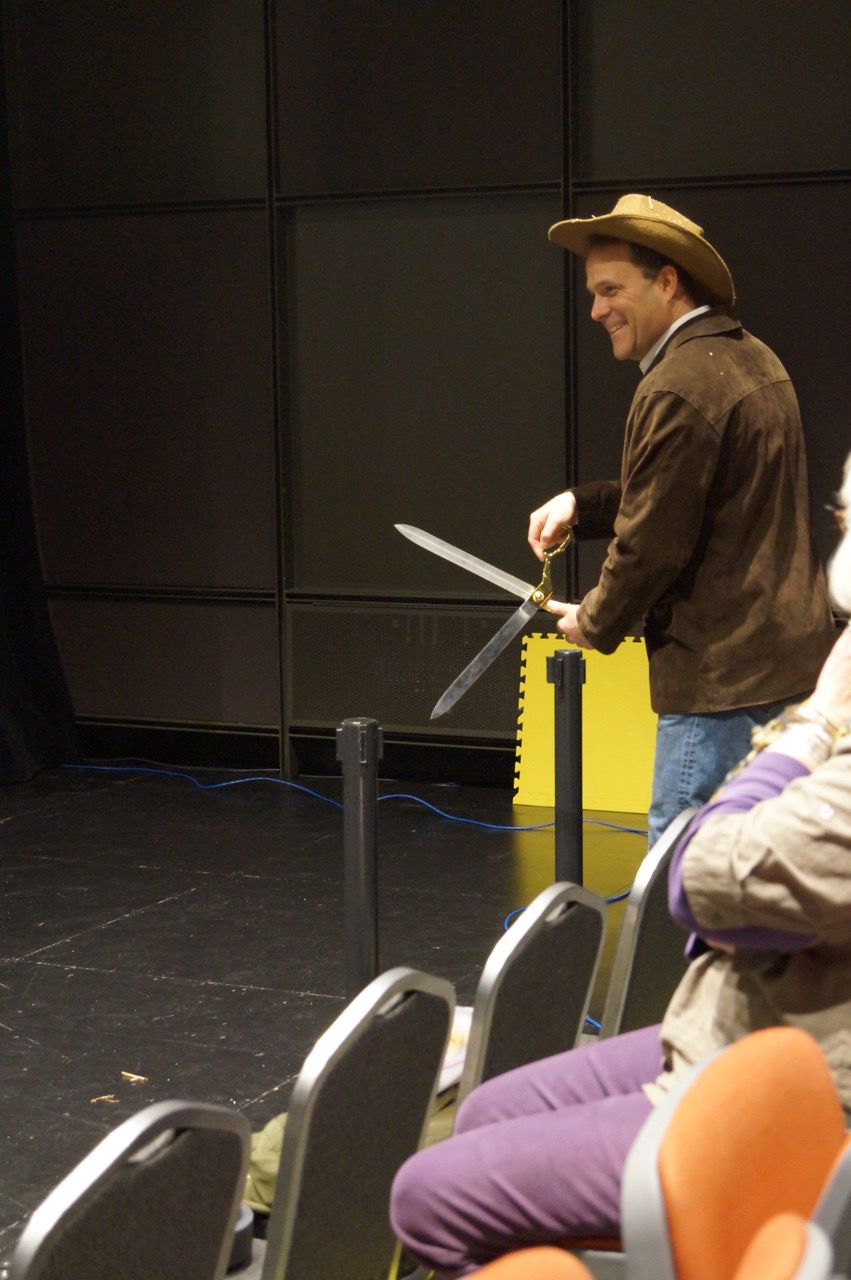 And that’s a wrap on the St. Catharine’s leg of the Tale of a Town Canada tour! Mayor Walter Sendzik cuts the ribbon to celebrate the opening of a store whilst playing the role of an infamous Medicine Hat mayor. While he didn’t play the role every night, Mr. Sendzik still got the opportunity to interact with the people he represents in government. Through community involvement, countless interviews, an enormous gas bill, and hours of hard work, Fixt Point Theatre has successfully brought the country together in a creative and interactive way. Photo by Lianne Major and Tsipporah Shendroff.