A Half-Baked Hypothesis: “The Physicists” is a Mystery for all the Wrong Reasons 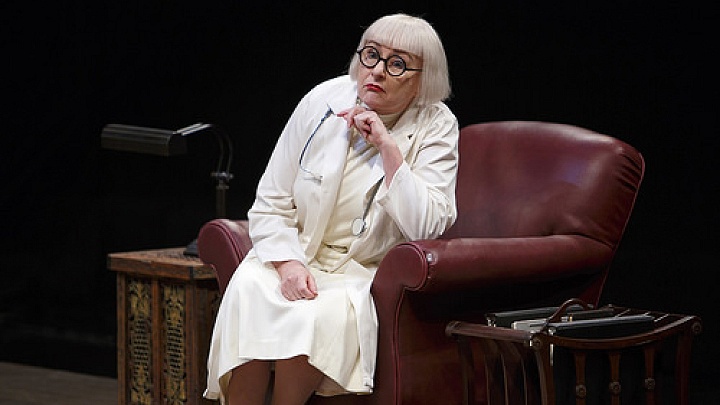 Murder and madness should be the political playwright’s playground. Unfortunately, the world premiere of Michael Healey’s Canadian adaptation of Friedrich Dürrenmatt’s The Physicists at the Stratford Festival fails to excavate the rich material at its disposal to its fullest potential.

Originally written following the introduction of the atomic bomb to the global consciousness, The Physicists tells the quirky tale of three former physicists – now patients in a Swiss mental institution – and the conflict between the pursuit of knowledge and the preservation of humanity. Under the watchful eye of hospital mistress Fräulein Doctor Mathilde von Zahn (played by Seanna McKenna), Newton (Graham Abbey), Einstein (Mike Nadajewski), and Möbius (Geraint Wyn Davies) find solace in insanity within the asylum and escape from an unjust world outside.

The play begins in the style of a murder mystery: a nurse at the asylum has been strangled – the second to recently meet this fate – and disgruntled detective Blocher is on the scene. Baffled by patients and doctors alike, and unable to find a much-needed drink, Blocher departs and the zany asylum occupants reveal the true motivations behind their erratic behavior: “science.”

Stylistically, director Miles Potter relies heavily on over-exaggerated acting in the first act to remind us that we are indeed watching a comedy. Though few and far between, there are moments of laugh-out-loud hilarity to be found in McKenna’s hunch-backed Fräulein and the put-on daintiness of Abbey’s Newton. Other actors don’t fare as well, and amidst the ensemble there is more than one cringe-worthy performance. Overall, the piece feels under-rehearsed. The jokes are there because they are difficult to deliver without the utmost finesse and hidden under stiff language. The result is that the comedy needed in the first act to make the philosophical ranting of the second easier to swallow is lost to big-eyed attempts at authenticity and mechanical, obviously cue-driven movement.

There are other half-baked artistic choices to be found in the design of the show, specifically in the set (Peter Hartwell) and sound design (Todd Charlton). The suspended atomic sculpture and use of modern hip hop tracks begin to enforce the modern relevance of the Cold War era terror that inspired the original play, but are under-utilized and consequently just seem out of place. One element that consistently delivers function and fun, however, is the lighting design by Steve Lucas. Crime scene photography, midnight meetings, and laser-based security systems come to life and fill in the gaps left by other design elements.

The Physicists examines the human paradox that leads to the sacrifice of what is possible in favour of what is responsible. The philosophy is fascinating, but the adaptation is rigid and the presentation heavy-handed. Ultimately, the play lacks the vitality needed to justify the characters’ willingness to give up so much in the name of Life, and that equation just doesn’t add up.