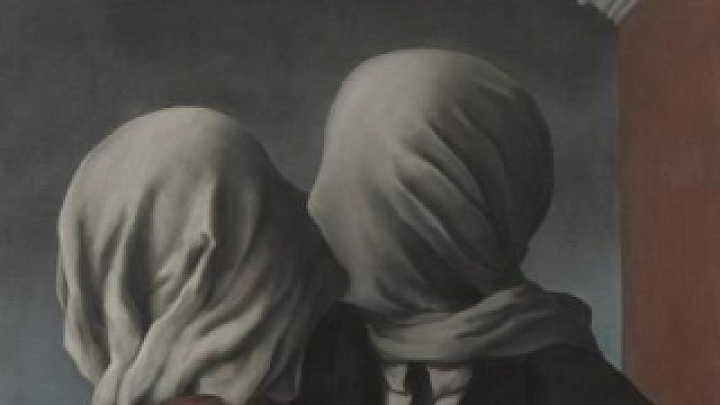 Ashes to Ashes; dust to dust; Pinter what are you trying to tell us? Stray Theatre takes on a double bill in what makes for a dark and slightly depressing Sunday afternoon in the Sullivan Mahoney Courthouse Theatre. Retired Brock University Professor Peter Feldman directs both productions, hitting audiences with Pinter’s forty minute one act Ashes to Ashes back to back with Samuel Beckett’s play Rockaby.

First up, Pinter’s Ashes to Ashes. The play immediately sets up a puzzle contract with its audience. Set in what appears to be a living room, Rebecca (played by Ada Smith-Sparling) converses with Devlin (Pat Noonan) about her previous experiences in a sadomasochistic relationship. It isn’t until about twenty minutes in that Pinter reveals to us that Rebecca and Devlin are married, and this is about as clear as their relationship gets. Numerous passages of text are repeated throughout the production, particularly Rebecca’s reference to babies being ripped from their mothers’ arms at the same train station. It is obvious that the text and the characters are not always in the present tense; with nothing done to theatrically accentuate this, however, it’s often unclear as to where the audience are in time and space.

One often hears the phrase “I got ahead of the action” to indicate an audience’s easy prediction of events to come. I did not feel ahead of the action, but instead so far behind the action that it probably already left the theatre and caught a bus back to England. Yes, Ashes to Ashes is a challenging play; Pinter ignores some of the basic rules of playwriting by not providing a location, character names, or relationships, instead dropping vague hints as the play goes on. Feldman needs to do more work to make sense of the complex and political story Pinter has constructed; he needs to show the audience why it’s important to stage this piece by Pinter – a 20th Century British playwright – in St. Catharines in 2015. How is the sadomasochistic relationship Rebecca seems to be terrified of relevant? Is the production making a comment on the BDSM community as a whole? What kind of political metaphor is Pinter drawing when he writes about babies being stolen from their mothers? How can any of this be made clear to the audience?

Now onto Rockaby: like the Beckett play itself, I will try to keep my review brief. It tells the story of an elderly woman waiting to die beside her favourite window (see why I said it was a depressing afternoon?). Actor Dawn Crysler manages to make ten minutes of silent rocking back and forth in a chair interesting – no easy feat. The entire play is recorded, with Crysler repeating key pieces of text. It is an interesting choice by Feldman to use recording, as it forces the audience to focus on the subtle actions Crysler plays. The buzzing from the speaker and the lack of live words spoken makes the mere image of Crysler alone hard to sustain, no matter how hard she works. If, like Ashes to Ashes, Feldman could search for a more theatrically intuitive way to explore the text of Rockaby then audiences might be more inclined to engage with Crysler’s performance of the last minutes of life.