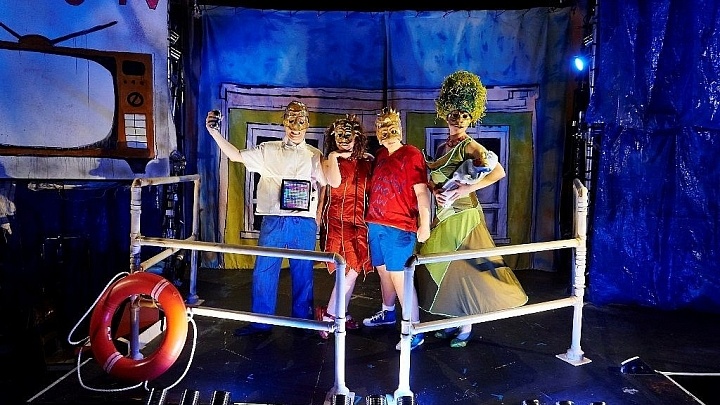 “It’s a fine line between tantalizing and torture”. Mr. Burns, A Post-Electric Play dances maniacally along this fine line, giving audiences a chance to see what the scraps of our collective cultural phenomena will become. Separated into three acts, Mr. Burns is fragmented and futuristic, an homage to its source material with its quippy humour and innovative in its portrayal of post-nuclear artistry. It raises the question: how do we keep creating art after the world has ended?

Outside the March transforms the historic Aztec Theatre – nestled between boarded up buildings on Gerrard St. East – into the last place of refuge from the nuclear holocaust. The location is no accident; the Aztec Theatre itself is a failed movie theatre with no electricity, and makes the perfect setting for a “post-electric play”. What’s more, directors Simon Bloom and Mitchell Cushman harmed no electrical sockets in the making of this show – it’s all done using independent power sources.

Playwright Anne Washburn drops the audience into three different moments following a massive nuclear meltdown: in the almost-immediate aftershock, seven years after, and 75 years after that. The constant variable is The Simpsons – as well as other cultural leftovers such as Ricky Martin and The Flintstones – which slowly morph into a kind of religiously charged ritual. What begins as retelling old episodes around a campfire in the first act turns into the staging of full-blown theatrical productions in the second. By the third, the now-mythologized Simpsons serve as the heroes of a post-apocalyptic opera depicting a nuclear flood, which swallows up Springfield (as well as the rest of the “real” world).

What makes the show so appealing – apart from the chance to see Bart Simpson (played by Rielle Braid) lightsaber battle Mr. Burns (Ishai Buchbinder) while Itchy and Scratchy (Damien Atkins and Sébastien Heins) look on singing Britney Spears – is its use of the entire theatrical animal. Nothing is wasted, and the unconventional location is used pretty ingeniously. The playing space surrounds the audience from every angle; at one point, the giant puppet hands of Mr. Burns battled no more than a foot above my head. Unencumbered by the traditional use of electricity, sources of light and sound come from everywhere and anywhere – most memorably, audience members are given glowing green lanterns to illuminate the playing spaces, a subtle nod to the iconic plutonium rod from The Simpsons’ opening credits.

For a production so soaked in pop culture references (and even pop culture references to those pop culture references), Mr. Burns is a surprisingly stirring piece. Bart’s “lullaby” to the extinct human race is truly moving, sung in a cracking child’s voice. The audience never gets too wrapped up in the cultural homage, or in the pathos of the characters. The skeleton of the theatrical body is laid bare; what happens and to whom is no more important than how it happens. In fact, it could be argued that – considering Outside the March’s mandate of immersion and this off-the-grid production – how things happen, and how they are told, is the most important aspect of this nuclear odyssey.