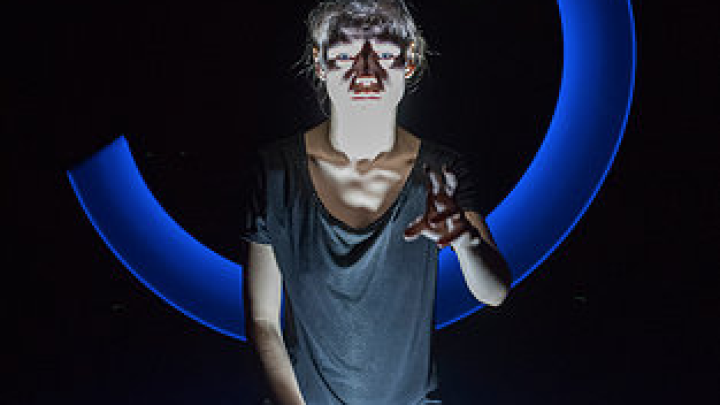 Our critics recently say Tottering Biped Theatre’s production of The Second Life, the second incarnation of a workshopped production from 2013 – The Inconsolable Blueness of Jeans. What happens when we position the digital in the analog world of a theatre? Here’s what the DARTCritics had to say about it:

A sister in search of her twin, a hacker in search of atonement for his past sins, and a vast online virtual reality setting that mystifies its audience. All of these things and more can be found in Tottering Biped Theatre’s latest production, Second Life. Written and directed by Trevor Copp, this play tackles the touchy subject matter of suffering from loss and depression in today’s technologically advancing society, yet can be difficult to completely understand for audience members who are not familiar with this play or its alpha test production, The Inconsolable Blueness of Jeans, which was performed by the same company in 2013.

The story revolves around three characters with troubling pasts: Jessica (Julia Cross), a young, frightened woman looking for her sister, Julia, in the vast world of the online simulation game “Second Life”. She seeks help from a Woman (Jessica Allen), a nonchalant smoker who never gives her name, but is an operator for the game’s support desk. The Woman informs Jessica about a sleep-deprived hacker, Nathan (Zach Parsons), who may be able to help her find Julia. As the story progresses, the audience learns more about Nathan and Jessica’s pasts and starts to see the struggles they endured in the real world. They discover Nathan’s past as a soldier and Jessica’s tragic loss of her sister, which lead to them turning to “Second Life” to create avatars to replace the person Nathan killed during a protest, and Jessica’s lost twin. To avoid spoiling the entire plot,, you must go see the show. It’s worth it.

This minimalist play made excellent use of handheld lighting, darkness, two puzzle-piece step set pieces, designed by Jacqueline Costa, along with many physical lifts and movement pieces. They use these elements to illustrate the open-world freedom of the Internet’s multiple digital landscapes, mesmerize the audience with the use of optical illusions, and interact with the audience in an engaging story). At first, the frequent blackouts seemed unnecessary, but worked effectively once the audience adjusted to the play’s dark transformable atmosphere.

One very interesting moment happened when the stage manager, Rose Hopkins, began to step outside her position and become a character for a brief moment to help create a moment of sheer disbelief and confusion, appropriately termed as a mind distortion. This moment received a lot of reaction from the audience, but proved effective when the actors and stage manager swapped positions under the darkness of blackouts and distort the audience’s expectations.

Overall, this show has improved greatly from its first iteration. As the company is still polishing the show’s motherboard, mark your calendars for October 21st to 31st as Burlington’s Performing Arts Centre showcases the completed spectacle.

Do you have another life on the Internet? The Second Life by Tottering Biped Theatre focuses on lives led online. Our heroine (Julia Krauss) has lost her sister in the “first life” and decides to look for her in the “second life”, a real-life Internet avatar world. She finds a hacker (Zach Parsons), who searches for her sister while dealing with his own haunting past – which includes a mysterious a cigarette-smoking woman (Jessica Allen).

Though the concept may sound simple, the script is anything but. With complications, twists and turns, it’s often difficult to understand what’s happening. The biggest issue is an unclear message. What is this piece trying to say?

What makes this show so unique is the use of lighting. This show uses light better than any other show I’ve seen, and there are scenes where the lights tell the story themselves. The actors create most of the effects with handheld lights, and though it can be difficult to see what’s happening on stage, it’s very effective and engaging to watch. To achieve these effects, the cast worked together to create beautiful movement scores by playwright and director Trevor Copp. One of these movement scores is the show’s opening, which uses handheld lights to create the air bubbles of a drowning woman.

One major downfall of The Second Life is how out of date the Internet references are: modem sounds, short form chat language, and even Second Life itself are all outdated and almost forgotten, making them irrelevant and distracting. For a play about the Internet, it’s too out of touch. This could be forgiven if the play had a clear time setting – it would be a period piece – but time is never specified. With the vague costumes and vocabulary that could be any time in the past twenty years, we assume that it’s the modern day. If the play is supposed to be modern or even “time neutral” (as if such a thing could exist), the way technology is used ruins this effect.

The ending seemed to set up more questions than it answered, but thank goodness Copp didn’t slap on a happy ending just to make audiences leave feeling satisfied. Copp trusts his audience, but he might trust us too much. There are concepts and ideas in the play that could use a better explanation, such as Second Life as a virtual world, but Copp trusts that we’ll understand everything. If the audience understands the story and the play better, it will be better received.

While this show has confusing moments, it’s much clearer and better explained than a previous version, The Inconsolable Blueness, as seen at Brock University just last year. This is due to a simplification and explanation of the script, including the elimination of the metaphor of blue jeans. This current production, playing at Theatre Aquarius, is considered a workshop. If the show continues to make as many improvements as it has in a year, it’ll be top-notch technological theatre in no time.