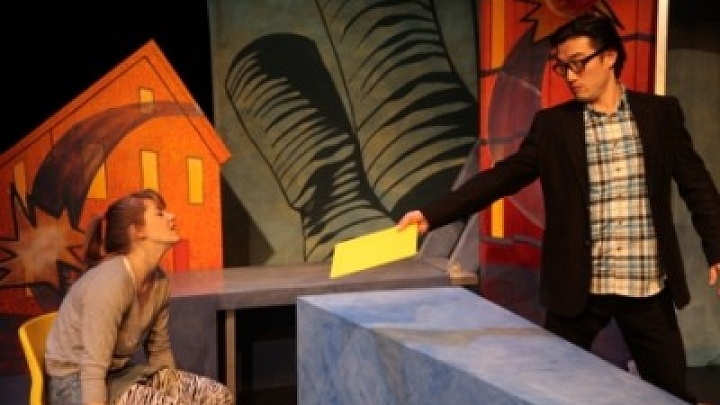 The DARTCritics recently saw The Incredible Speediness of Jamie Cavanaugh produced by Carousel Players at the Sullivan Mahoney Courthouse Theatre. Taking on the interesting challenge of reviewing YA (young adult) theatre, here’s what two critics thought of the production:

Nicola Franco writes: Imagine-a-mind-where-everything-moves-so-fast-that-the-rest-of-the-world-can’t-keep-up. Chris Craddock’s production of The Incredible Speediness of Jamie Cavanaugh, directed by Kerry Ann Doherty, brings us into this world through the character Jamie (Amelia Sargisson), a pre-teen girl with ADHD (Attention Deficit Hyperactivity Disorder) who believes she has the superpower of speed. With the help of her smart and timid best friend Max (Daniel Maslany), she tries to manage her ‘superpower’ and the hardships that come with it.

This play, which is presented for young audiences and tours schools in the region, reaches out to children with or without ADHD and deals with timeless struggles of bullying, friendship, and understanding. Sargisson effortlessly transforms into a hyperactive child with a wild imagination and works with the audience by explaining how her story will unfold in order to battle through her issues as well as help her friends through their own problems.

Set designer Nigel Scott brings the super hero world to life with bright, vivid colours in a multifunctional, minimalistic set. Jamie’s journey is all the more enhanced by sound designer Michael Rinaldi, who scores Jamie’s super hero moves with such staple comic sounds as ‘whoosh!’, ‘bam!’, and ‘crash!’. All of these elements connect the dots of Jamie’s world and bring the audience into the chaos that is her mind.

Doherty lightly addresses the issues of separation and divorce for Max in a truthful manner that made the story more believable. Other issues such as bullying are dissected from a different point of view, giving the audience the background into the bully Rock’s (Sean Baek) home life. This play successfully triggers empathy in the audience and as I looked around, I saw kids deeply engaged and connected to these issues.

In the end, Jamie’s parents choose to deal with her ADHD through medication, which, one hand can connect the character’s experiences to audience members going through similar treatment, while on the other hand raises the question of why other alternative methods were not presented as clearly.

Apart from its ending, The Incredible Speediness of Jamie Cavanaugh brings the audience in to embark on an adventure that is just fast enough to keep your kids wanting more.

Jessica Laurie writes: If you’ve enjoyed the rush of popularity for superheroes like the Flash and Quicksilver then you will love The Incredible Speediness of Jamie Cavanaugh by Chris Craddock. ‘WHIP-LASH’ is the only word that came to mind as Jamie (Amelia Sargisson) zoomed back and forth across the comic book stage (designed by Nigel Scott) in Carousel Players’ new touring kids production.

Jamie Cavanaugh tells the audience the story of her really bad day — which ends up being a really sucky week and some less-than optimal months. Her friend Max’s (Daniel Maslany) parents are getting divorced, two bullies — Rock and Hard Place (Sean Baek and Darla Biccum)-are tormenting them,  and her fish keeps almost dying. It’s a lot to deal with for a young girl, but luckily she has superpowers! She has super-speed, super-eavesdropping, and the power of an excellent sound designer (Michael Rinaldi). Jamie’s main concern is the fact that, instead of being a superhuman, she might have ADHD . In a sea of story conflicts, this play is about her accepting and working through the fear of doctors medicating away her super-speed.

Jamie is not actually incredibly fast, but Sargisson’s acting IS incredible. The matinee I saw was her second show that day, but her never-ending inner monologue  to the audience didn’t falter once. She pushed every movement to the extreme physical limit of her being, and was constantly fidgeting, bouncing, and biting her nails. Her supporting cast was just as talented. They played a multitude of characters, each with distinctive voices and physicality. Kudos to director Kerry Ann Doherty — three people played over ten roles and it was clear and obvious with each switch.

Nigel Scott’s design is graphic, bright, and a playground for actors, a feat made more impressive given this is a touring show. Lots of wheeling around on cart/desks/chairs and doors, and props made from yellow plastic gave just enough for the actors to work with without being cluttered or breakable.

Another all-star was the sound designer, Michael Rinaldi. This play is jam-packed with sound cues, from every ‘whoosh’ of Jamie breaking to the audience to pop culture references like the theme song from Sherlock, and Star Wars.  The sound helped differentiate characters- such as a President theme for the Principal — and show Jamie’s ‘super speed’. Bravo!

Since the current debate about children’s vaccinations has gained a lot of momentum it’s important to note the message of this play. It isn’t pro or against over-diagnosing or medication — it’s just the story of how one girl dealt with having a problem. ADHD is something a lot of kids struggle with, and this is an accessible way for parents and schools to explain to kids why they might need to take medication.