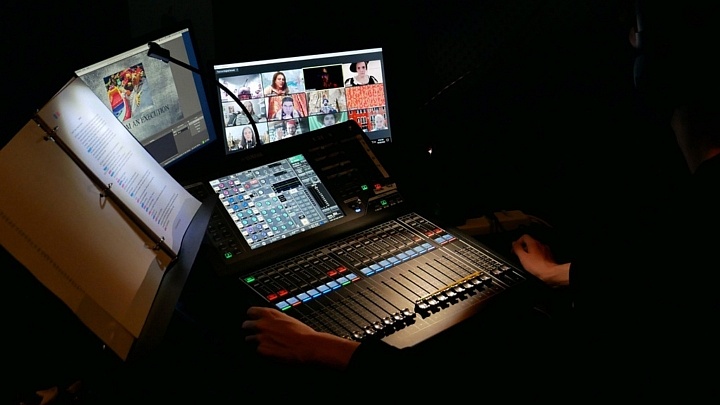 In the week before Scenes from an Execution opens, everyone I talked to has wanted to know how it works. We are staging the production online, a convention in theatre that has become necessary in the COVID-19 pandemic. There is no precedent for how to rehearse and perform theatre live online; the team has been adapting since April to bring this show to life.

For this blog, I have enlisted the expertise of technical director Gavin Fearon and assistant technical director Alex Sykes to explain what’s happening behind the cameras. I ask “how does it work?” and Gavin laughs before saying “yeah.” A lot of the technical process of this show is so out of the ordinary that it’s hard to know where to begin. Alex makes a start by explaining that “the audience will be seeing it on YouTube live; that’s where the finished product will be.” Before being delivered to YouTube, different parts of the show travel through multiple softwares. 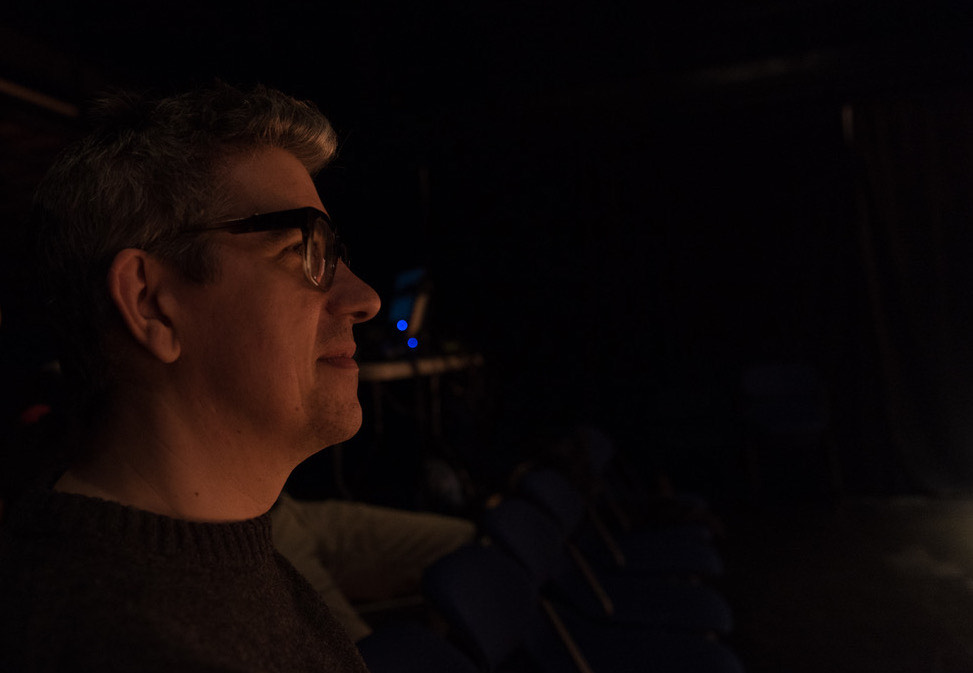 Gavin Fearon, technical director of Dramatic Arts at Brock and of this production of Scenes from an Execution. Photo by Neil Silcox.

All of the video streams of the actors performing in separate spaces are passing through Zoom. Two of the actors are being filmed by external cameras with two outputs, one going to Open Broadcast Software (OBS, a free broadcasting software) and one to Zoom. For some scenes those two cameras are patched straight to OBS so that the actor’s Zoom video square can be moved around the audience’s screen independently from the squares of the rest of the cast; when the cameras are patched into Zoom first, those squares move in relation to the rest of the cast. Using these different configurations allows for a wider variety of visual effects. This adds a complication: when the actors on independent cameras aren’t patched through Zoom, they can’t be seen by the rest of the cast, through their microphones are still patched through Zoom so they can be heard. Thus, what the audience is seeing and what the actors are seeing are completely different. This requires a great deal of specificity in rehearsals to pull off.

Simultaneously all Zoom video streams are being sent to OBS. QLab, the software being used to run sound effects, also goes straight into OBS. Once there Gavin can control the layout of the video components as desired. There are three overall sources of sound: the actors on Zoom; the two actors on independent cameras with independent microphones (all managed by Alex as sound operator); and sound effects. These are run by Sid Malcolm through QLab; Sid is also operating lighting effects. From OBS everything goes to YouTube Live. 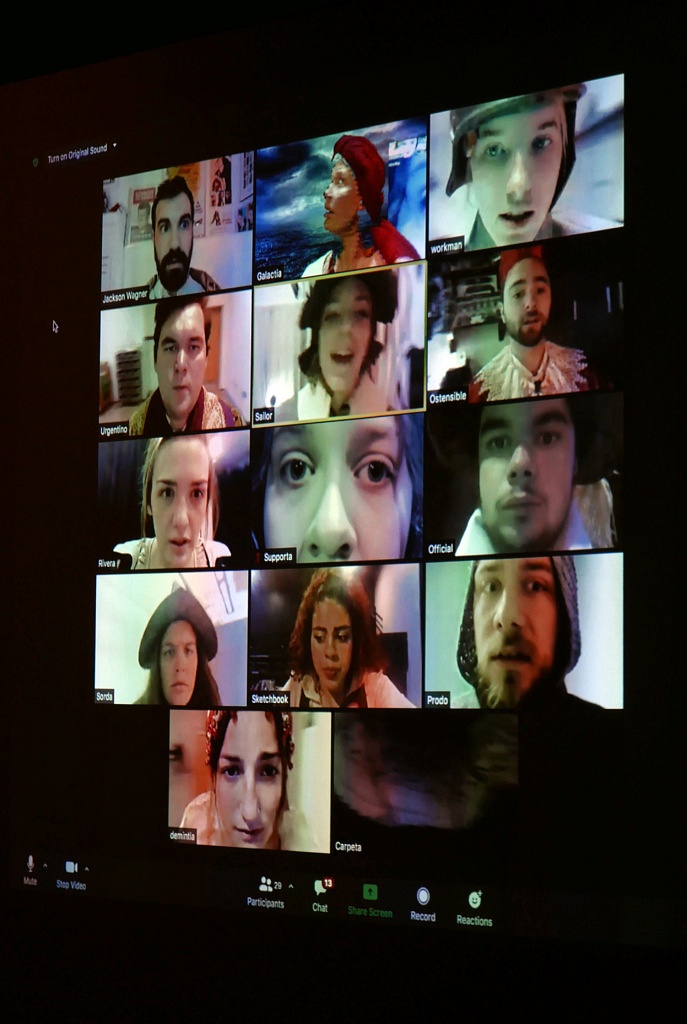 Zoom feeds of the company of Scenes from an Execution, on a computer operated by stage manager Peter Herbert. Photo by David Vivian.

Gavin describes this all as “a weird tangled up system that sort of turns in on itself a few times.” Part of what makes it tangled is the sheer volume of equipment being used. Gavin says, “I think there’s like four or five computers that are just dedicated to getting everything together out to YouTube, and that doesn’t include everyone’s personal laptops when they’re in their own room doing Zoom calls.” Those dedicated computers include the one from which Gavin is operating OBS, the one from which Sid is operating QLab, and the computers through which the aforementioned external cameras and microphones are being connected to Zoom.

The technical directors for this show are also operating as part of the running crew. The crew is as small as possible for this show because each person in the theatre needs to be a safe distance away from everyone else to avoid the spread of COVID-19. 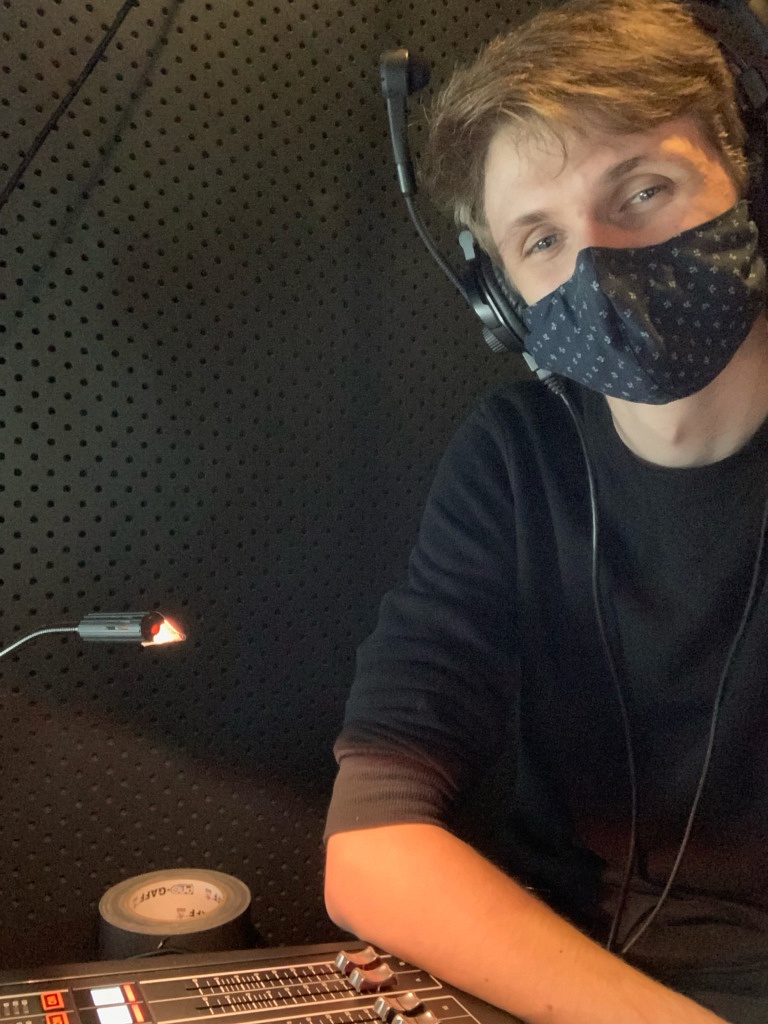 Alex Sykes, assistant technical director of Scenes from an Execution

The downside with all of these variables is that, in Alex’s words, “so many things could go wrong which is—” he adopts a sarcastic tone “—thrilling.” Gavin digs into the possibilities; “There are always things that can go wrong, like a lighting board could crash or the wireless mic batteries can die or something. So there’s all the regular stuff that we’re always dealing with.” In the case of this show specifically, Gavin says, “our biggest concern is equipment failure. If one of the devices that we’re using, for example, fails, then we’ve lost that camera completely.”

Gavin brings it back to what the process is about for him as the technical director: “Ultimately, anything that goes wrong is about a negative impact on the audience’s experience.” He gives an example: “The audience might not notice if a sound cue doesn’t fire, but if there’s no voice coming from an actor that one hurts a bit, you know?” He refers to the previous week of rehearsals, introducing technical elements to the play: “So the process for us this week has been trying to get the system stable so we can trust that those things won’t go wrong.”

Despite the challenges and apprehension, Alex describes what he enjoys about working on this show. “We’re taking risks and evolving past just using Zoom,” he says. “For me, I think the Zoom ‘landscape’ is a little bland […] I stare at it for work and for school. I think it’s nice to be taking a leap and trying something that pushes the boundaries of what’s possible” —something more theatrical. What has been most exciting for Gavin is “how we tell a story in the digital pandemic, given the resources that we have available to us. That’s been the thing that gets me to work every day, I’m really enjoying that process in a way that has reminded me that I really love my job.”

I ask a question that has been on my mind throughout the process— is this theatre? Gavin responds thoughtfully: “I visit a full spectrum of answers for this question pretty much on the daily. The last couple of days being in the room with collaborators, putting stuff together to tell a story, it has felt more like theatre than it did two weeks ago.” He draws attention to the main difference between in-person and online performance events – “having the audience in the room experiencing it when that energy is direct and palpable.” He elaborates, “I feel like we’re telling a story but theatre is a very specific kind of storytelling. We’re making a play but are we making theatre? Not having an audience in the room, I’m not so sure. We might be making theatre, Asenia, I don’t know, we might not.” This complicated answer seems important to share because, as I see it, it is OK that there isn’t a clear-cut answer to these questions, and that we can keep telling stories and making art anyway.

Here’s my fellow DARTcritic Holly with the latest in her vlog posts, as she and the rest of the company get ready for opening weekend.