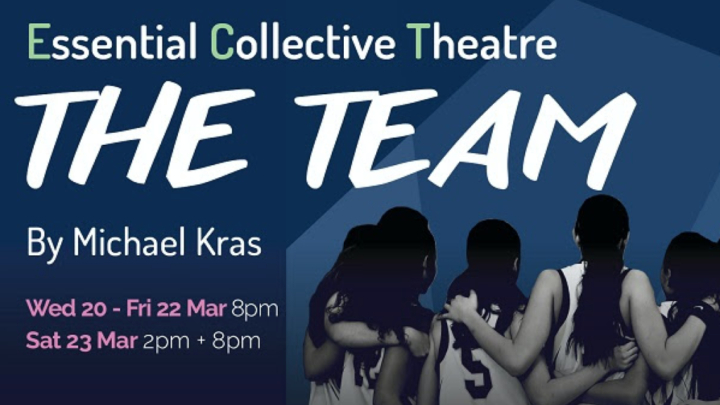 This year, our student embedders become one of The Team, as they follow the creation process of Essential Theatre Collective‘s upcoming show. To start, they met with director Colin B. Anthes and designer James McCoy to discuss their vision for The Team.

After speaking with director Colin Anthes and set/lighting designer James McCoy, we are certain Essential Collective Theatre’s upcoming performance of The Team will not drop the ball.

Fresh from a production meeting, Brock graduates Anthes and McCoy generously met with us to describe the creation process of Essential Theatre Collective’s (ECT) upcoming production of The Team. As a group we will be going along for the ride, to see first hand the process of mounting a show like this one. Embedded criticism is a behind-the-scenes report of a production’s creation, rather than a critique of the final product. The critic witnesses the creative process, in order to advocate for the artists’ work. Readers of embedded criticism may gain a deeper understanding of the choices made by artists prior to and during a final performance. As we, the embedders, witness and record the complexity of the artistic process, we are looking forward to creating a dialogue that will diminish the gaps between critic, artist, and audience.

Written by Michael Kras, The Team depicts five teenage girls on a school basketball team as they explore issues of sexuality and teamwork. The girls have different motives for playing basketball and must learn to navigate playing together. As their relationships with each other become more complicated, so do their interactions with each other as a team. The girls must find a way to maintain rhythm both on and off the court. The content of Kras’ play is mirrored in his writing. Anthes points out that the text itself is rhythmic, even amidst plot-based conflict: “[It’s] a colloquial kind of poetry.” 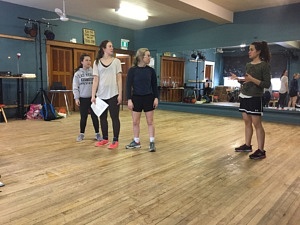 Prior to ECT’s current production, there were previous readings of The Team at Hamilton’s Theatre Aquarius, as well as at Queen’s University. ECT’s production will play at Theatre Aquarius and The FirstOntario Performing Arts Centre in St. Catharines in March. Anthes and McCoy are passionate about building a sister-city relationship between these two communities. Anthes states that he wants to use both of the theatre companies he is a part of in St. Catharines—Twitches and Itches Theatre and ECT—to build more comradery between Hamilton and St. Catharines, as they are both “growing as two sort of vibrant hubs” and Anthes is very interested in seeing how these two communities can expand; McCoy, who calls Hamilton home, feels similarly.

As a designer, McCoy’s challenge will be constructing a set that can adapt to two very different theatre spaces, as Aquarius is a much smaller venue than The FirstOntario Performing Arts Centre’s Robertson Theatre. “You can get two of Theatre Aquarius inside of Robertson and still have space left over,” McCoy states. McCoy brought impressive scaled model-boxes of both theatres to the interview. He goes on to express the mutual interest that he and Anthes share over “lines on gym floors,” and the ways in which he can utilize light to create different spaces with those lines. “I took a gym floor and broke it down to its basic components,” McCoy explains, “and then I shattered it.” This, McCoy says, represents the pulling-apart of the characters’ lives. He plans to transform the space by including set pieces like lockers on wheels that spin around to become a liquor cabinet; in addition, he hopes to incorporate a block of stairs that will represent both bleachers and a lunchroom. Ideally, the stage will be designed so that the actors can maintain the same blocking for both venues.

Anthes believes in the creative ensemble model. He does his best to make sure that everyone’s voice is heard during the production process. This production consists of a female and non-binary cast. Considering The Team is a play about women, but is written and directed by men, it will be crucial that the actors’ voices are heard. “There are no male voices in this show,” Anthes explains, “and so I will actually be, in some ways, a minority voice in the rehearsal process in this and that’s what I want.” That being said, Michelle Mohammed, a recent Brock graduate, is assistant director and, in addition to the actors, will offer another female perspective. 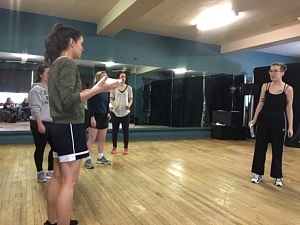 In upcoming rehearsals, Anthes plans to have each of the actors read through their lines separately, so that the through-story of each character is clearly addressed. By allowing each actor to read through the play as a monologue, the specific traits belonging to each character, such as pattern of speech, will be made obvious to the whole cast. “That’s very important,” Anthes explains, “because there’s so much overlap [in the dialogue].” He uses this method to piece all the characters together like a puzzle, while still maintaining the individual significance of each character.

Additionally, Anthes plans to use a creative process with ECT that is similar to his work with Twitches and Itches. For example, the process may include some physical work, choral singing, and an activity called “Viewpoints.” Created in 1970s and expanded upon in the 1980s, Viewpoints is a set of exercises to explore movement through improvisation. An artist may choose from nine Viewpoints (for example, spatial relationship, kinaesthetic response, or vocal pitch) and improvise with the element both physically and vocally. As he guides the actors through Viewpoints exercises, Anthes says he will focus on duration and tempo in order to develop rhythmic patterns in The Team.

Anthes hopes The Team will not only reach people in their late teens, but also audiences of all ages. Anthes states that the play deals with real-world issues, such as peer pressure, post-secondary pursuits, and seeking acceptance. He believes that The Team will act as a bridge between adults and teens, potentially leading them to an intergenerational understanding of the pressures associated with school and teenage social interactions. The Team is accessible to all genders, addressing issues of alcohol consumption, sexual interactions, and college acceptances. Additionally, issues such as the bullying of those in the LGBTQ community (are evident in this show) as well. LGBTQ rights are a major theme in Kras’ play, as Anthes suggests that this work is about the “complicated network of navigating maturity, navigating becoming an adult.” We, the embedders, are interested in watching these narratives disentangle as the team begins rehearsing.

Anthes, who has previous experience with embedding through his work with the St. Catharines theatre company Stolen Theatre Collective, tells us he hopes that as embedders we have a high degree of interaction with the cast. Break times in rehearsal will enable us to interact with the actors, and Anthes says he looks forward to the pieces of the collaborative process that come from our input. His belief in the creative ensemble model seems to extend through and beyond his creative team, through and beyond us, and into the presence of The Team’s future audience. In Anthes’ words, “without trying to make [The Team] sound like a pedagogical exercise: see the show, it will be good for you.”